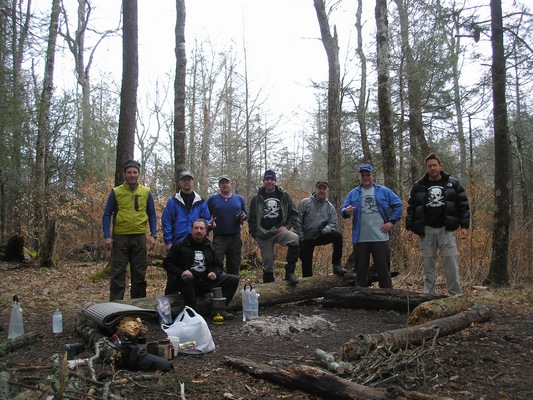 Highlanders rejoin the Muir Faction for fun and festivities at campsite 26 off the Miry Ridge.

The preceding photos are compliments of "Chuck Adams".  They were able to eclipse our arrival by a night. 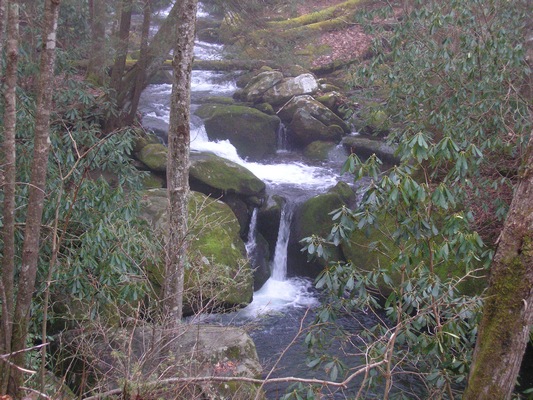 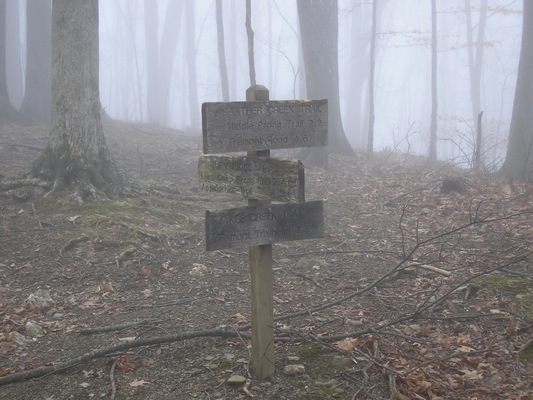 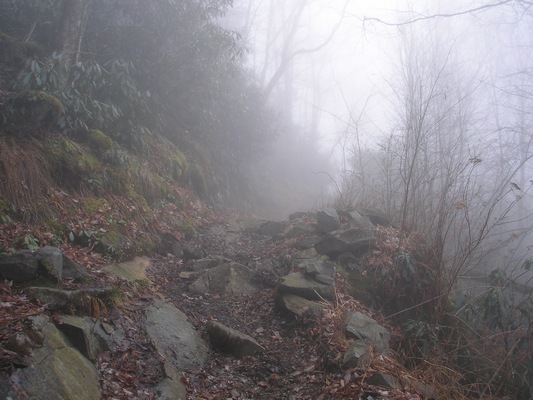 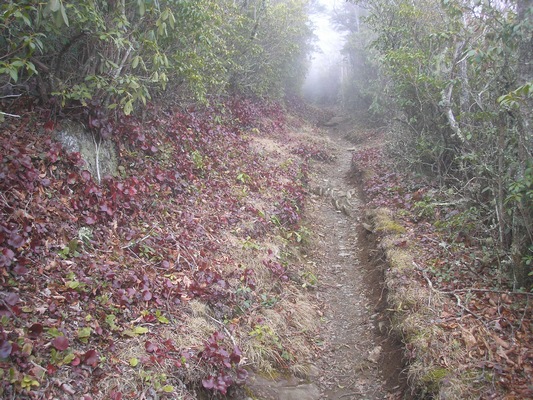 It was a foggy walk up. 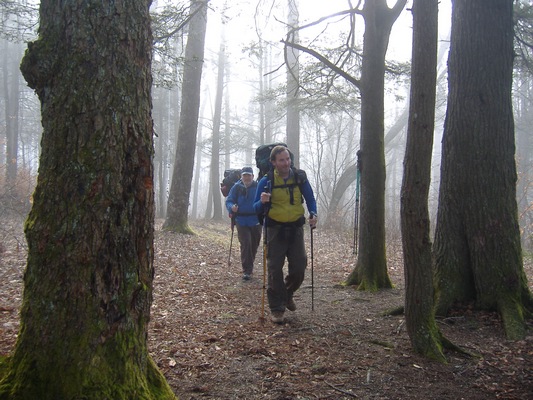 When we got there, all wood had been gathered and Jerky Mike smiles with glee as he brushes off his Firebuggery Badge. 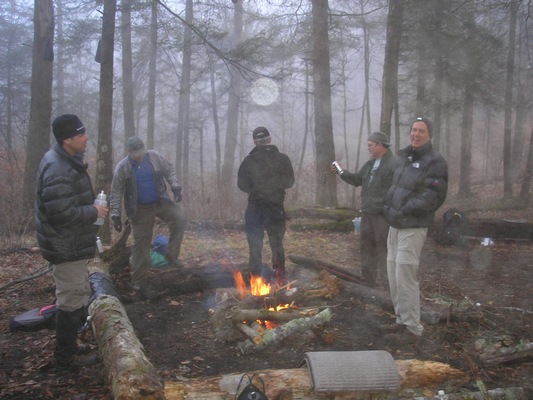 BC George laughs at the canned goods JMike has procured until he drinks some of this energy concoction and and turns into a wood sprite.  He then begins to insist that we call him Mr. Whisker Doodle. 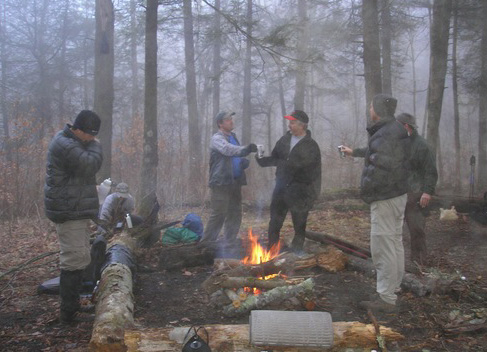 That prompts JohnOMtns and Rocky Ledge to want some. 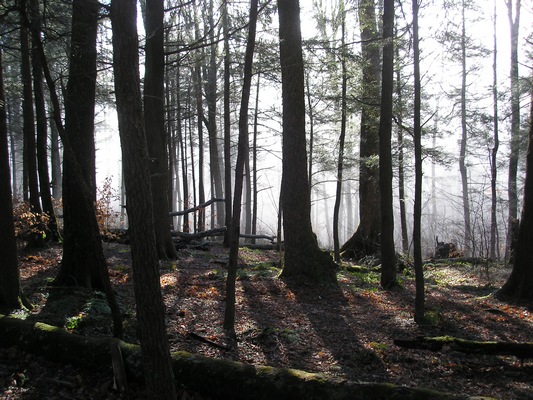 The sun was brief but enjoyed. 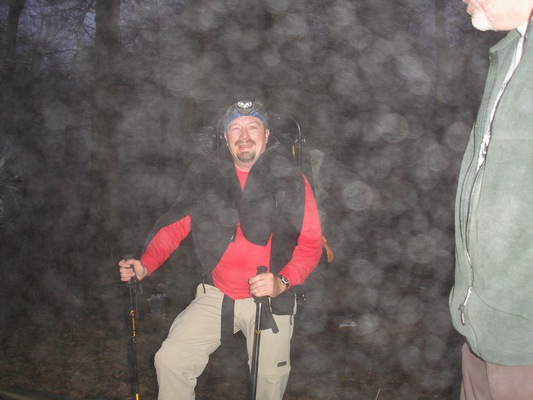 By dark thirty, Scooter arrived sporting the newest in trail attire straight out of "Out" Magazine.  (We explain that we have been referring to is Outside Magazine) 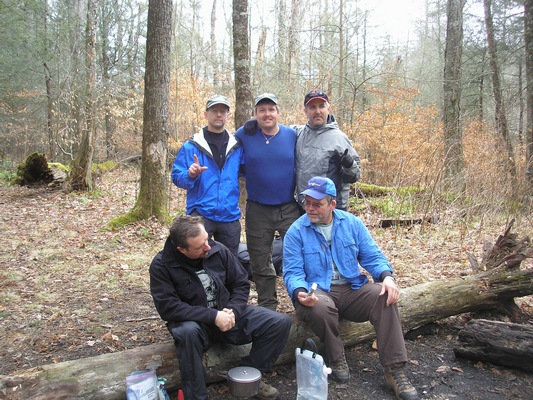 The Muir Faction prior to their departure. 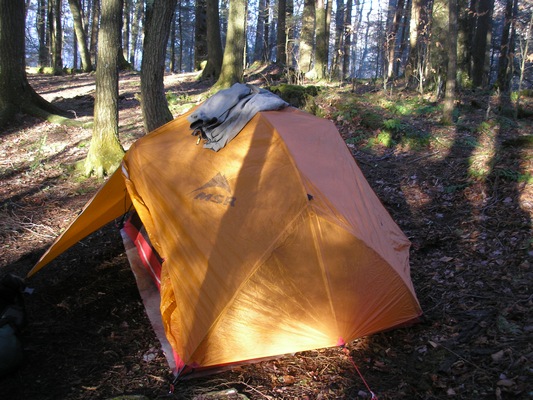 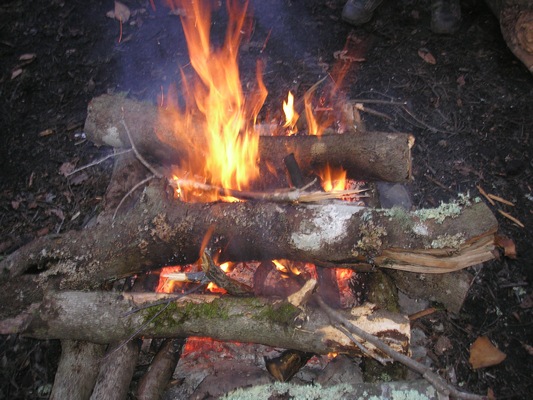 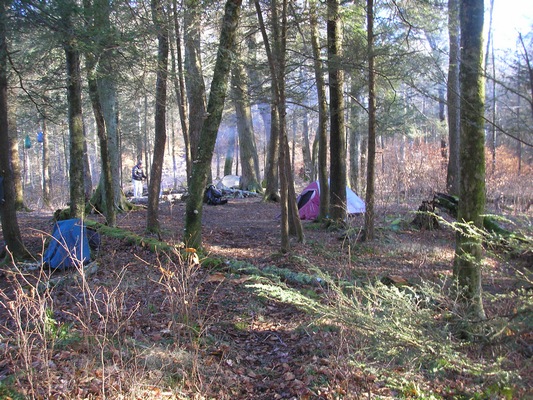 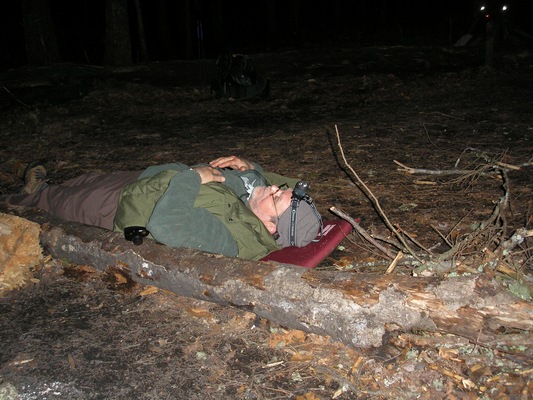 Since Grady was absent, JMike takes the stick nap for him. 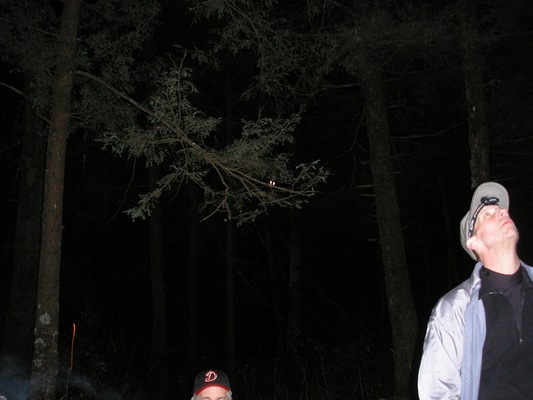 Chuck ponders the meaning of life and nature and.,.. 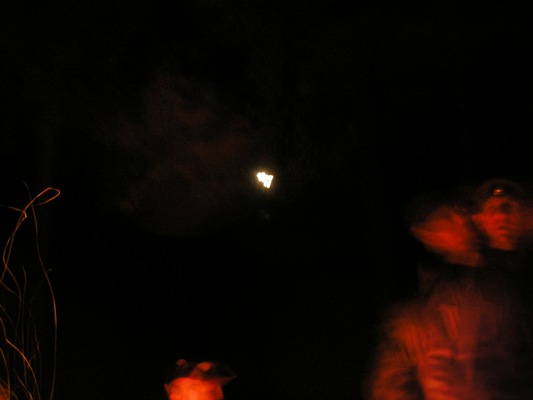 "Forget that crap, I just got whisker doodled." 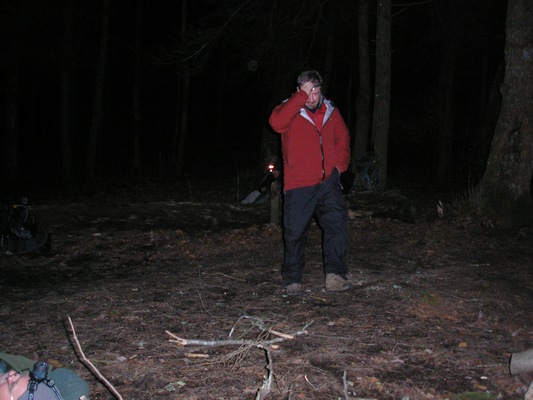 Martin returns George's radio after the admonition to never bring it again.  "The woods are for silence and I for one, will not tolerate any more mass media interference."  Scooter insists. 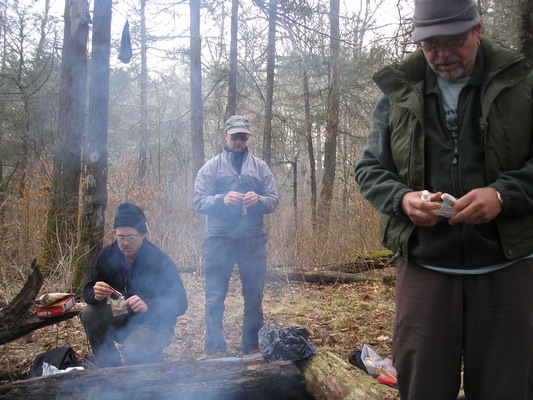 JMike wonders who put the opossum in his mouth.  John and Chuck quickly tear into the wood sprite repellent.

The next section will deal with the second half of our trek out via the unmaintained and little used Bent Arm Trail. 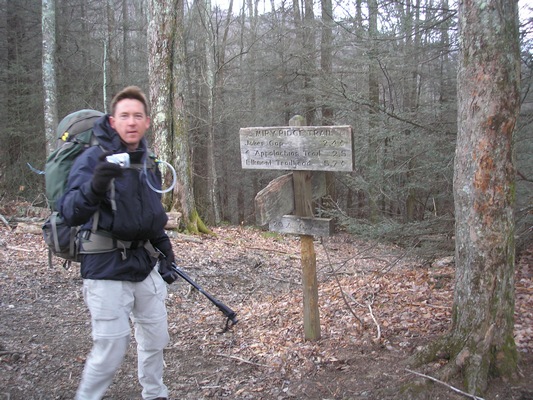 George suggests that we consult a map since we can't seem to find the start of the trail. 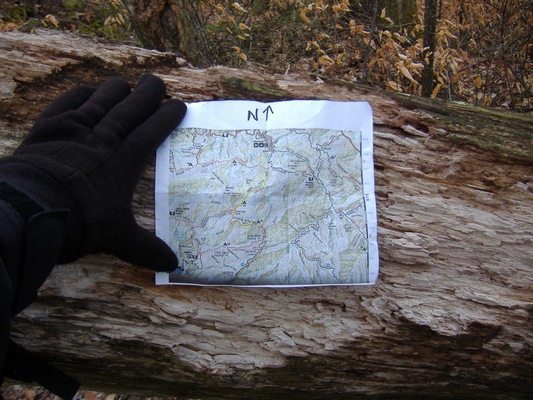 We don't need no stinking maps. 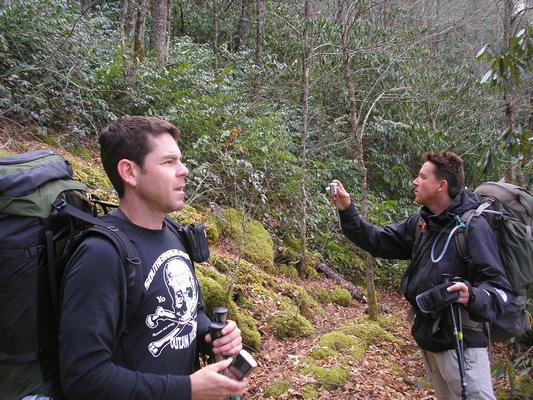 This was after we had "swam" out of a rhododendron tunnel about an hour or two into the bushwhack. 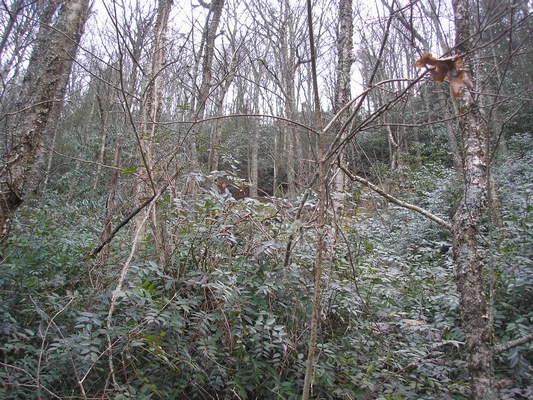 This is just a small section of what we crawled, swam, jumped and slid through. 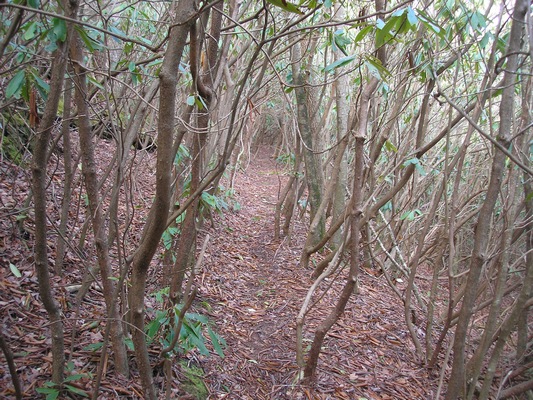 Can you believe that we were happy to see this?  This was about as good as the "manway" trail got.  If you think it doesn't look so bad, remember that we all had full packs and did 6 miles through it. 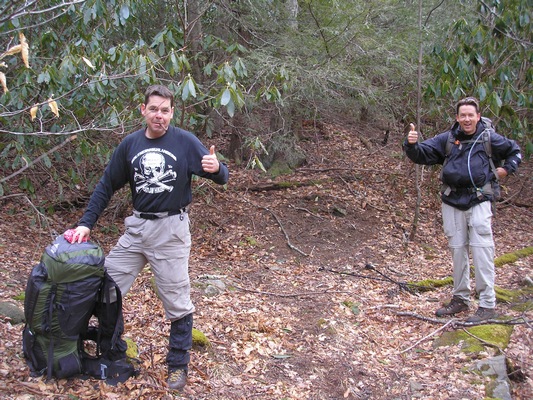 When we came to a big clearing like this one, it was time for celebration and a break. 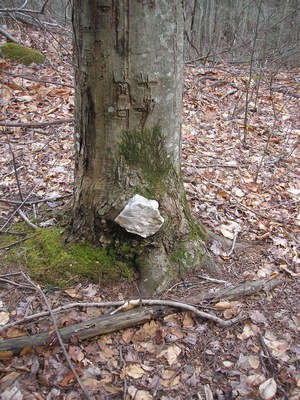 Odd sights along the way. 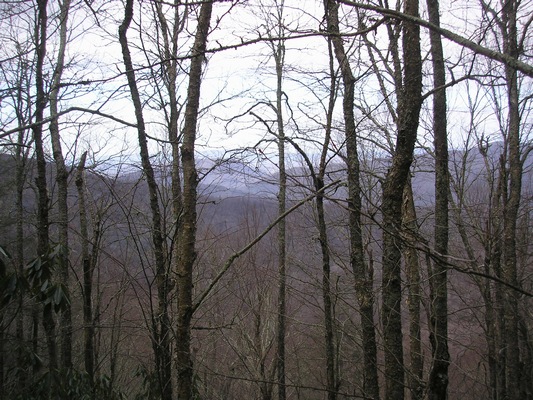 Looking down towards Little River. 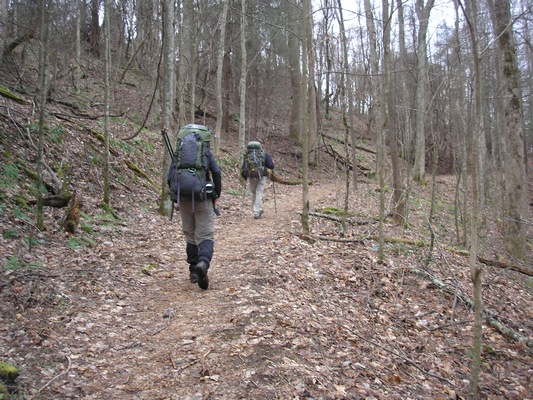 We popped out on Cucumber Gap and did a mile or so to the car.  This trail seemed like a Highway after the six miles of Bent Arm.  Arriving at the car, we see that Jerky Mike is still not there.  We later found out he had returned to camp for a lost item of clothing and not for the purpose of spending more time with Martin alone in a wilderness setting.  (I don't care to know how he lost the item of clothing in the first place)

Trail Stats:  Jakes Creek to Miry Ridge to Camp 26. 5 or 6 miles?  Out via Bent Arm Manway off Miry Ridge at Intersection to Lynn Camp Prong. 6 miles of Rhodo swimming and Sawbrier switching and Dog hobbling to Cucumber Gap, then a mile or so to the car.  I won't tell you why I think it is called the Bent Arm but you can get a visual idea.

It was our pleasure to rejoin the Muir Faction from Dayton, Ohio.  We look forward to their company again real soon. They are fine folks and dedicated woodsmen who will be attending the Hangover Festivities with us this Autumn.