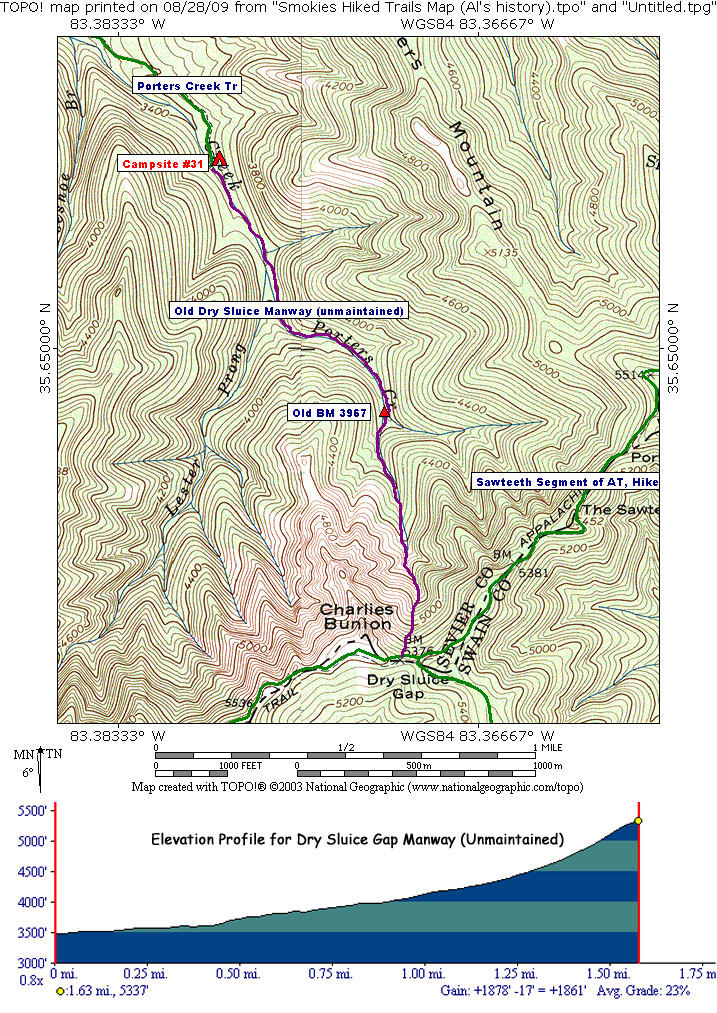 We have been planning this one for years but weather has kept us at bay.  When it broke, we were out with a vengeance.  We ascended to Porter's Flats campsite, set up tents and took off up the Dry Sluice.

Some thoughts about our ascent of the Dry Sluice Gap Manway:

Beginning out of Campsite #31, the route is sufficiently confusing in that you break right back toward the creek but run a parallel rhodo tunnel for a couple hundred yards before making the first of about 6 crossings as shown in the video.  After you cross, begin looking for the cairns as they are essential for this journey.  We heard an interesting story from the Smoky Mountain Hiking Club folks.  As we walked up to Porters Flats, they were coming down and told us that one time last year one of their members was knocking down the cairns on the descent.  His assertion was that if he found the way, then others should be able to as well. According to Sally Dumplin, the woman says a fist fight nearly erupted as a result.  She claims that he is an elder member of the group.  I wonder if he considered that Morgan Briggs almost died because of crap like that.  Unreal.  Whenever I think I have seen it all, there's stuff like this.

Porter's Creek is the main body but Lester Prong breaks uphill as well. Our only "real" problem, and thank God Jack was there, was 3/4 of the way up as we were climbing the body of Porter's Creek.  We missed a left turn and I had to traverse and plunged through a huge Rhodo thicket.  I was springing off those hooked branches in a near vertical point of the climb.  It was like a cartoon if you could imagine me "boinging" from patch to patch of rhododendron until reaching the sliver of trail.  It was a blast.  I think this technique is my personal innovation in rhodo surfing.  Just climb to the top of the patches that hang off the hill.  Spring up to the next patch and don't plunge through.  If you do, then you will invert but still be able to right yourself.  Rhodo won't cut you like dog hobble, it is very soft and forgiving.

When we finished the traverse back to the left of the main creek bed, I wondered what may have happened if I had continued on through that start.  I think it brings one to a spot closer to the Bunyon, but Jack cautioned it was treacherous.  The left path was in the shadow of Porter's Mountain and joined the A.T. at the bottom of the Sawteeth.  As with most such ventures, the danger is in the descent, which we made primarily in the dark.  Those Anakeesta slate rocks are ridiculously slick.  I fell 6 times.  We resisted using headlamps because it messes with your night vision.  If you allow your eyes to adjust, you can discern small upturned leaves.  I had drug my foot intentionally on the climb and found those slags on the flip side.  It is also a good idea to look down behind you so you can recognize the terrain on the other end. Just keep ascending and you will eventually hit the A.T.  Don't stop, it's definitely worth the time.