What a wonderful weekend with great weather, huge crowd and even a Dumplin Valley Drive by. We had paddlers, backpackers, kayakers and even a Pontoon boat.  Big fun in the sun and no rain!  (okay a few drops on the way out Sunday, nothing of which to complain about) On another note, we have a celebrity in our midst.  Mr. Kevin Umberger is featured in this month's edition of Backpacker magazine.  Be sure to check out his narrative of Ramsey's Cascades featured hike.  We have all the bunks filled for the cabin this weekend but there is plenty of space for camping as we will ascend the new, shorter route to this place outside of the Smokies that we tend to visit most annually.  The plan is to depart at 10 am Saturday, details are still being arranged. Grady maneuvers the choppy waters of Fontana lake to carry us over to that wonderful spot on campsite 90.  My good friend, Steve Corbett, a former backpacker who is limited in physical activity due to a medical condition, once asked about just camping in a spot.  Well, Eagle Creek is one of those spots.  What do we do there?  Well, we gather wood, hike, paddle, explore, fish sometimes, pan for gold and socialize.  For two days, time passes like lightning at the sithenge. 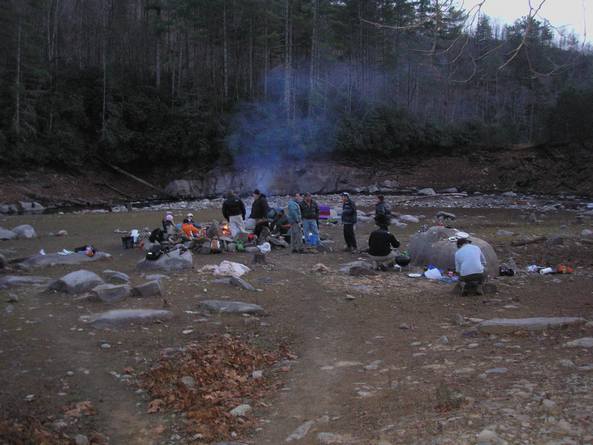 Those stone seats were manufactured by Highlanders several years ago, we return annually to occupy them and occupy them we did.  I think that the Eagle creek site is one of those good karma places that draws you back over and over.  The first time I walked through there, Wayne and I were doing the Lakeshore trail.  I had a great feeling about the spot and vowed to return.  I brought Ab and Martin at first.  That same trip we were surprised by a boating drive by from Danno and Toad.  That was few years ago.           Fontana Memory We were graced by their presence again.  Here is the Dumplin Valley boat crew.  That guy on the right is former President Hitler, aka Pat Moore.  He wanted to make sure we were doing things right. Jacqui and Andrew followed Grady and myself.  It is about a 2 hour canoe trip from the marina.  They kayaked. The SS Grady passed its sea trial, barely. This was the plan for several of the group.  Ethel toted the pontoon across the mountain and offered pro rated rides across the lake. Although the Dumplin Drive Byers had to depart, we insisted they perform camp duties to keep their skills sharp.  We appreciate it. It kept us all warm and frightened. This is Chief Sitting BullS***, head of the Semihole tribe. This is Ab once again "not messing with the fire." 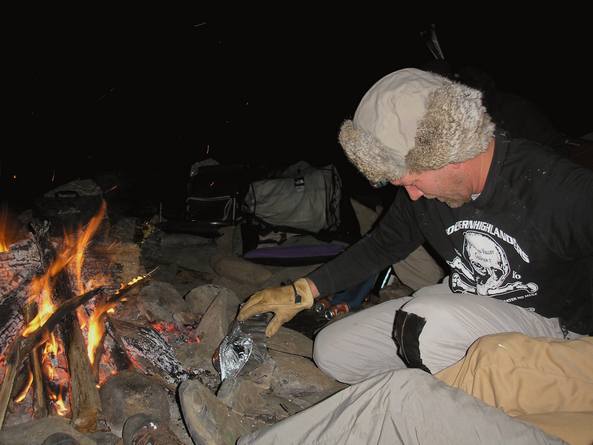 This is Ab throwing my hot dogs into the fire that he was "not messing with". 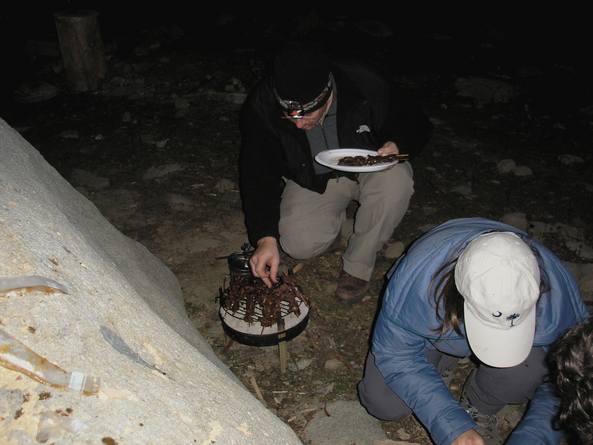 This is Ethel, preparing my meal of deer k bob. On Saturday, I rode across the lake with Danno to pick up Kevin and we made the side trip to the Copper mines.  We saw interesting stuff. 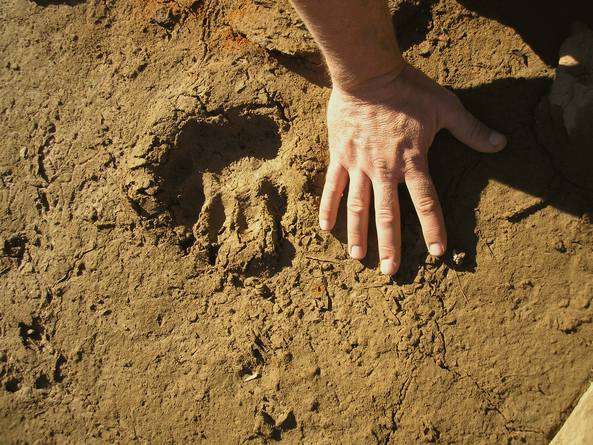 There was this mohunker Grizzly track. Cool brick artifacts and a foundry. We should have pushed further up into the cove but didn't have a good map on our person. Ethel prays, "If only I could have her knit me a toboggan like that."  Jacqui smiles smugly, denying him the opportunity to size it. 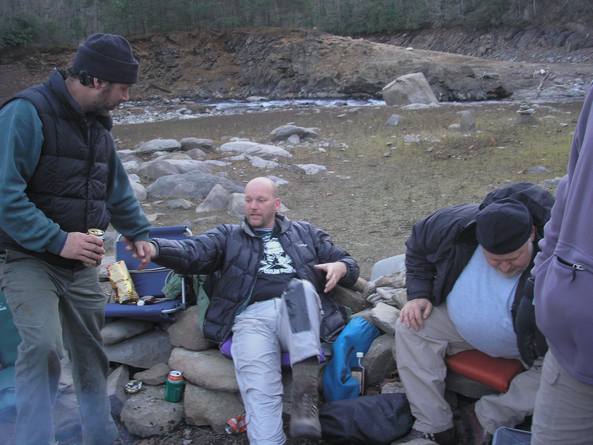 Early in the evening, Grady and Ab began their demonstration of ballroom and Salsa routines, followed by that nostalgic piece from Flashdance that carried us all back to a wonderful time in life.  Jerky Mike claimed their little demonstration was a bit effeminate and broke into a saw dance, seen here from a previous outing. Saturday saw the arrival of Sara, High Speed, Beth, and Jason.  Sally Dumplin and Mrs. Dumplin are on the far left.  (Sara begged me to take her picture, so I had to oblige)

In all, one of our largest showings and a very pleasant adventure.