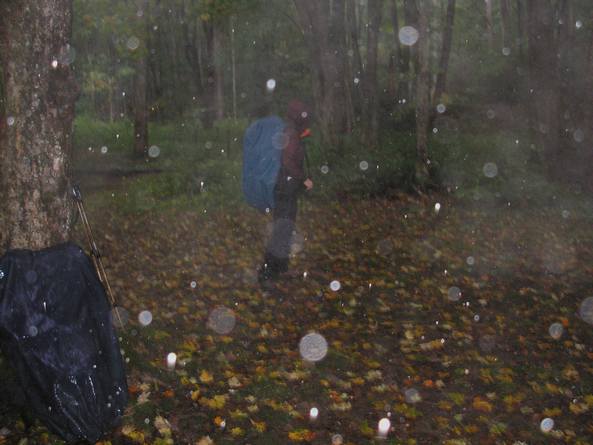 Okay, are you happy UL?  Yes it rained some.  This is Kevin scanning for a tent site. 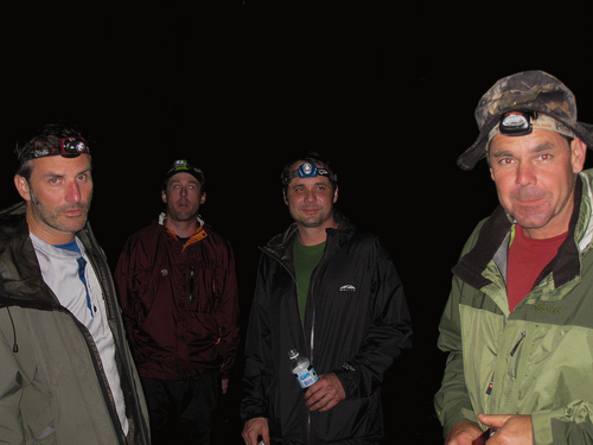 Dave is downright looking like Wiley Oakley, man o the mtns.  Umberger says, "Good Luck",  Bill Alexander notices Sally Dumplin's ruggedness  and realizes that Dave does have a true 3 person tent.  I am just content for the break in the rain.  (photo courtesy Jacqui)

When we dropped down off Clingmans Dome, the weather was great. 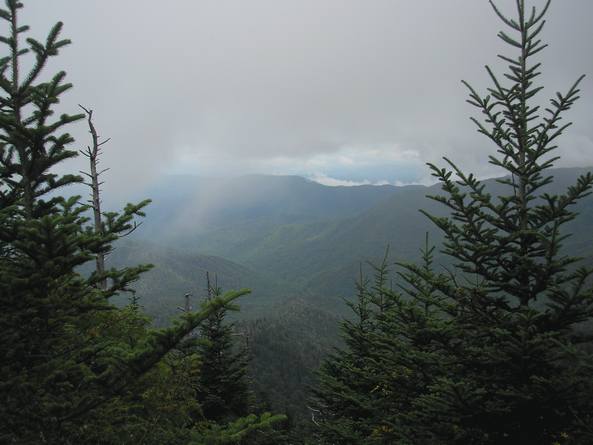 The clouds were obviously rolling in. 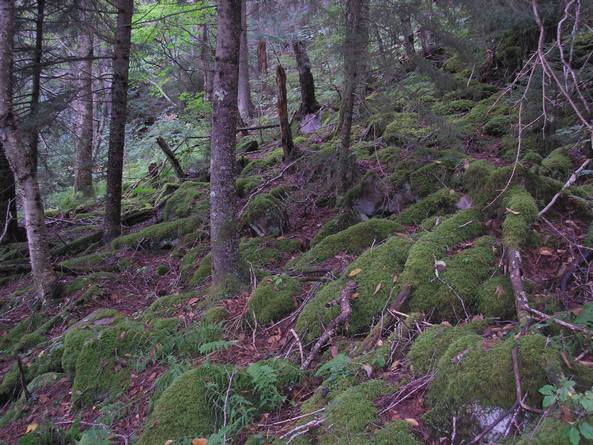 It is dry here and we got to appreciate the variety of this trail.  Kevin is another member of the 900 mile club.  Neither of us had experienced the opportunity to drop down this trail and we jumped at the chance. 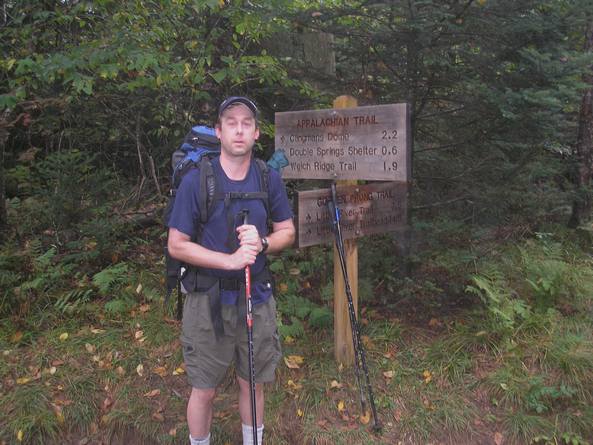 Pretty soon, Sally Dumplin will be joining him as he looks to be on track to complete all of his Smokies Trails this year.  BC George isn't far behind.  Why else would we be making such an unusual sojourn.

This is a pile of yard sell stuff we found halfway down Goshen Prong.  By the looks of things, it looks as if a Dumplin Valleylander had chucked their gear halfway up the trail but on closer inspection we found remnants of food, eliminating them from the suspect list.  There was a suspicious cigar wrapper and Flaming lips CD cover in the debris along with a copy of "Overcoming Ombrophobia". 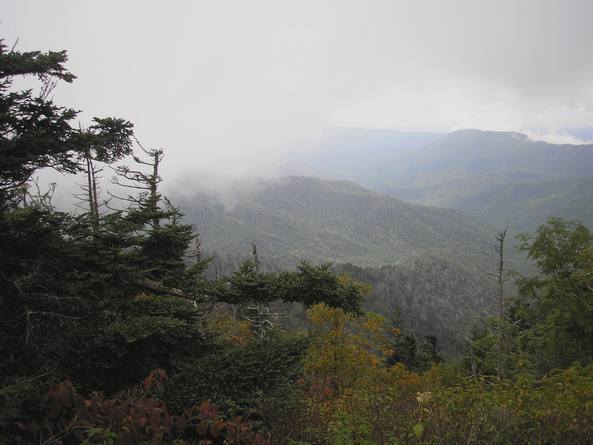 If you look to the right of this picture you will see the Little River drainage near our final encampment.  Goshen follows the far left fork. 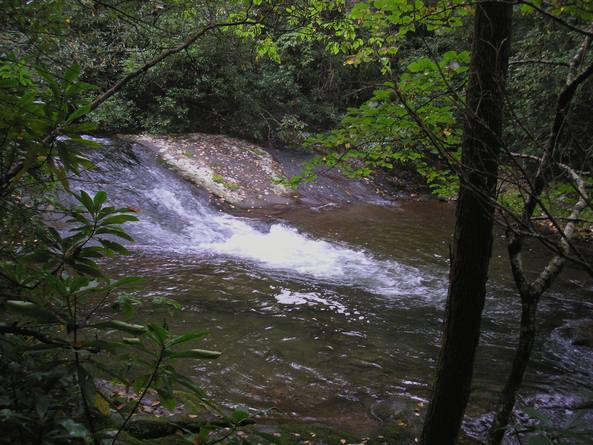 Gushin Goshen, right before the onslaught of rain. 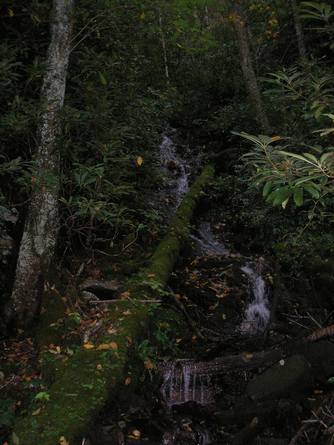 waterfall Dave and I climbed a few years ago. 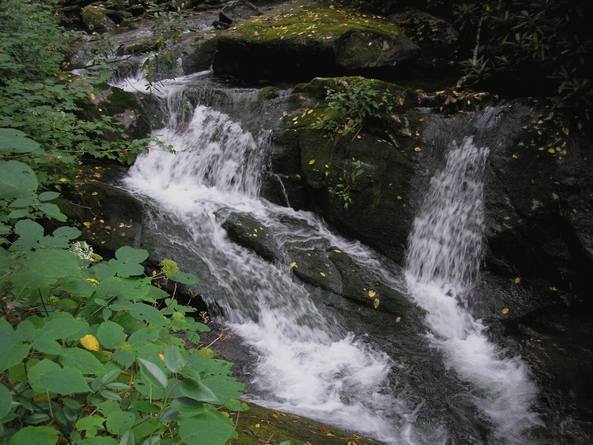 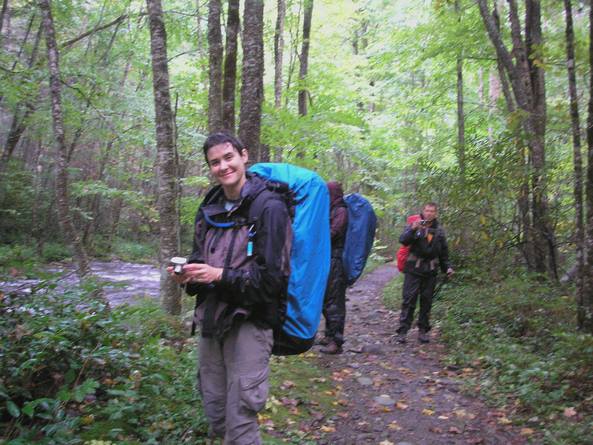 Jacqui came rolling in about 10 pm Saturday in the downpour. 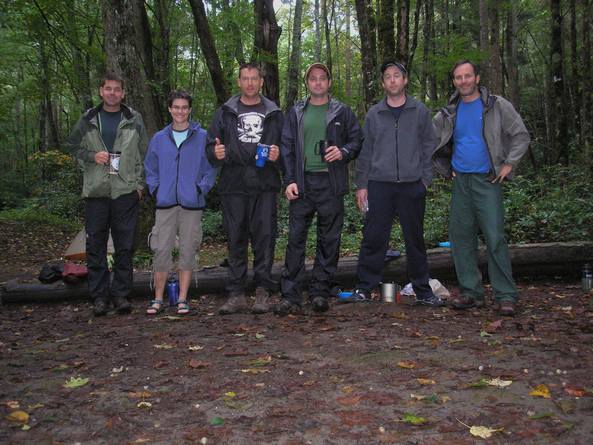 We had a fire, believe it or not, BC George regained his firebuggery badge and Umberger is fighting a new trail name.  High Speed Alexander made a successful descent of Rough Fork and says it felt like he had one stuck in him.  When I arrived with Kevin at camp, I only noticed one tent.  Apparently I surprised Dave and George  who assured me they were "leveling the floor", whatever that meant. 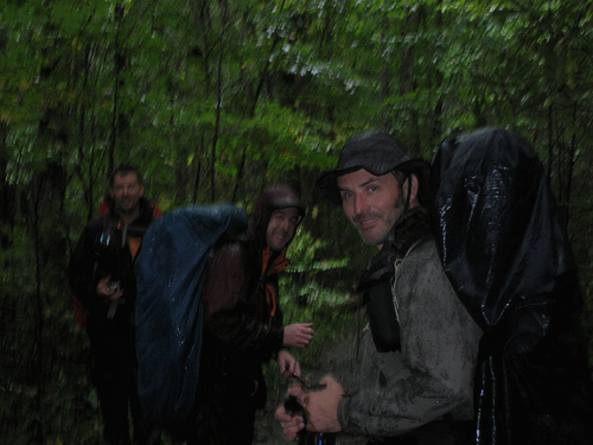 And away we go down Little River Trail.

Out:     Little River to Elkmont:  4 or so. (yeah, we conned Jacqui into shuttling us back to Husky Gap)