Looks like the SouthernHighlanders had a little company on the Little Bottoms trip last weekend.  Here the Ranger is seen dispensing warning tickets to excess backpackers at the campsite. 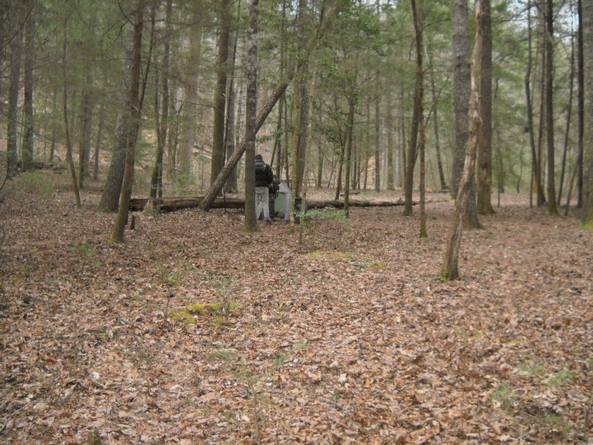 BC George gets a little "extra" ranger attention as his tent gets searched for a second time.  Guess BC George looks guilty of something.  I don't know what but he is guilty of being a DA at times.  Don't know if that warrants a rainfly check by the fuzz or not.  Either way, I got a kick of out the affair, from a distance.  Apparently you are not allowed to have a lighter in the backcountry unless you are a chain  cigarette smoker, which George is not, anymore. 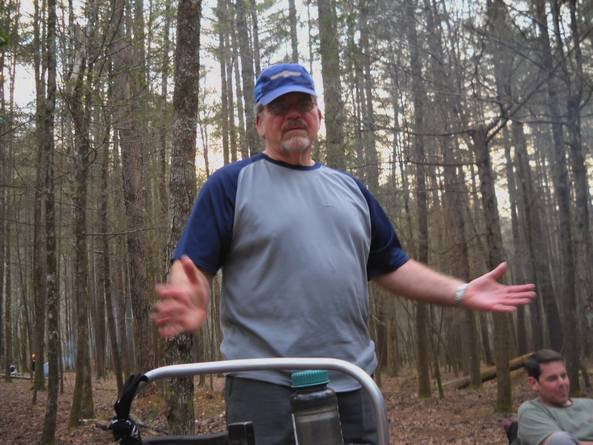 Jerky Mike says he has problems with authority figures and might just go off if his stuff gets searched.  Sally D reclines saying, "Take me to my happy place". 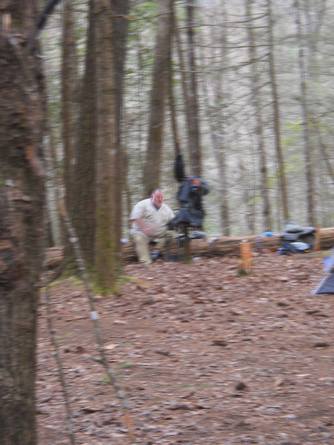 And who do you think was present to witness this Outlaw Hiker run in with the law?  None other than the Brush Swine himself seen here with his usual yard sale of gear.

Mike and Dave examine the new Muir Faction Logo.  Mike thinks he can replace John Muir and become the picture of the SouthernHighlander faction with a little more beard work.  Maybe so, Blue.  Maybe so. 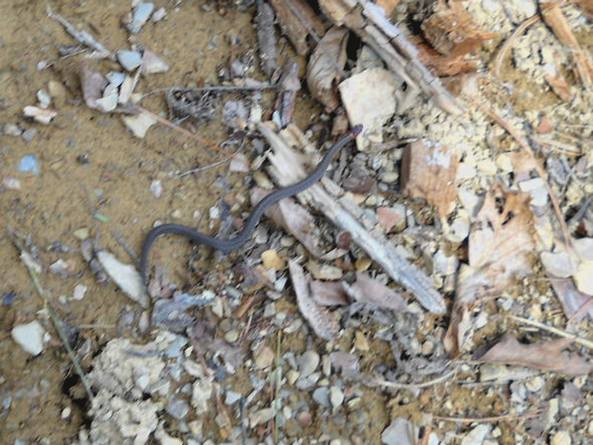 There are a few things I always run across when trekking out to Little Bottoms any time of year.  Snakes.  Scroll back through any of the little bottom trips and you will find that I always see a snake in any month or any weather.  Snakes and rangers, always at this site. 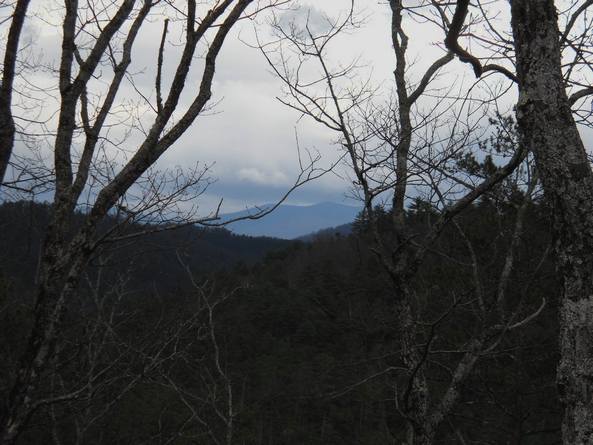 From the apex of the pine nob you are looking back towards Spence Field and Rocky Top. 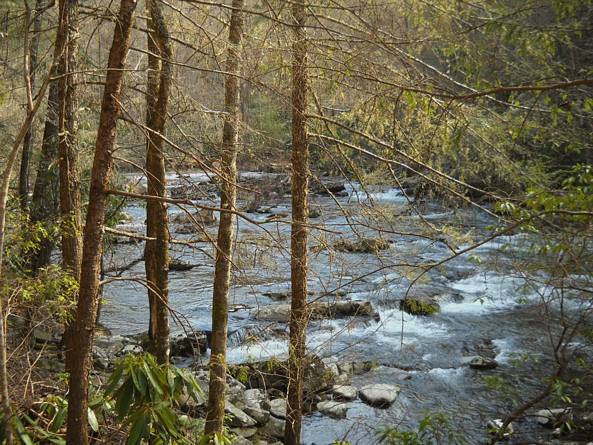 The Big Two Hearted River is one of my favorite Hemingway stories.  I made UL read it before his first trip out here. 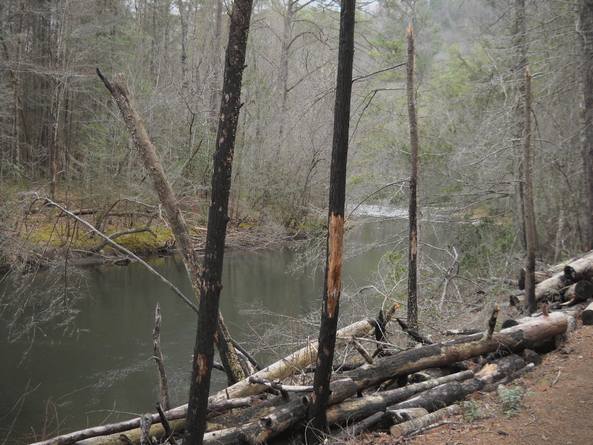 In that story, Nick Adams confronts his war torn past reflected by the charred trees and insects he encountered on his fishing trip to the Upper Peninsula of Michigan. 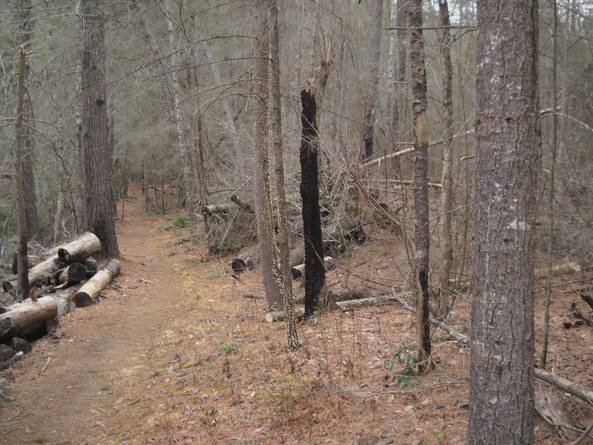 The mountains are metaphor in the transition of winter and spring like life building on the ashes of our past.  Charred remnants stand to remind us of the detritus we jettison until we learn to properly build upon  foundations cumulatively  absorbed.  Here is the result of a parasite, the pine beetle.  No doubt a new species of tree will dominate the forest in the next few decades as we  pay for the sins of clear cutting done a hundred years ago. 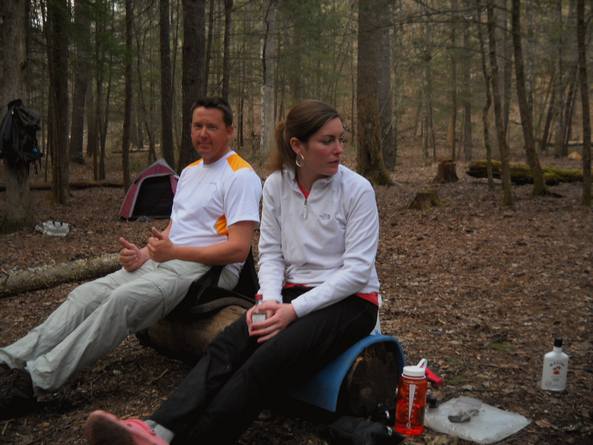 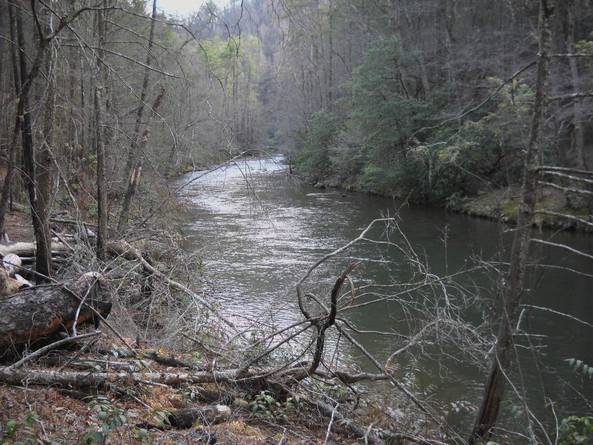 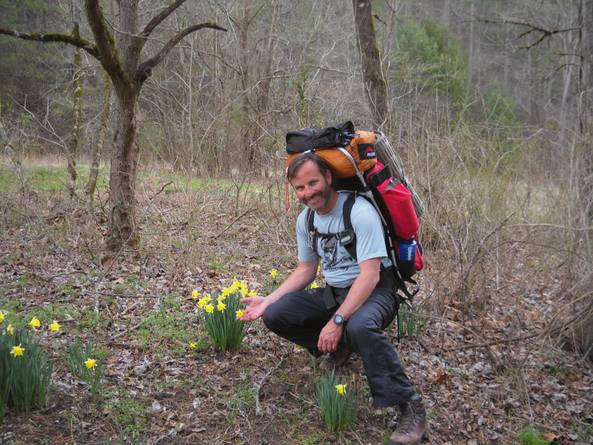 Only in March will you see jonquils with JohnQuill. 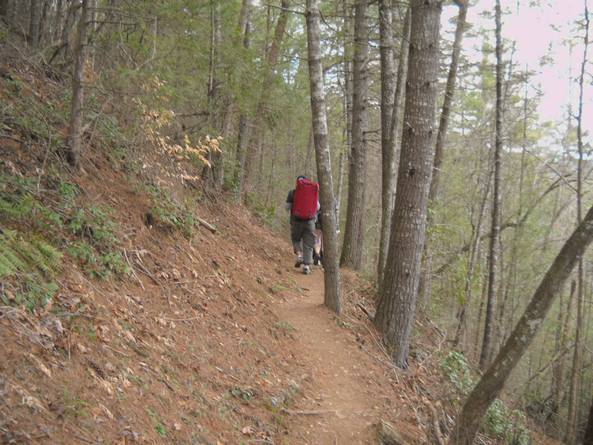 Of course on this trail you will also see Asians with wheeled luggage and a ricksha contraption to carry beverages.

Always an adventure at the Little Bottoms campsite.  Not pictured was McLovin and Mickey and their two friends and Uncle Tom, aka Mad Jack Hutchins.  My photoshop finger was too tired to make them famous this week. (My apologies to Rakestraw, Will and others who check the web.  This was a last minute deal and I got back from Co on Fri and blasted off on Sat for this trip.  Just didn't have time to update stuff.  Hope you can make next weekend 's trip)

Part Two:  What you missed while we were in Breckenridge: 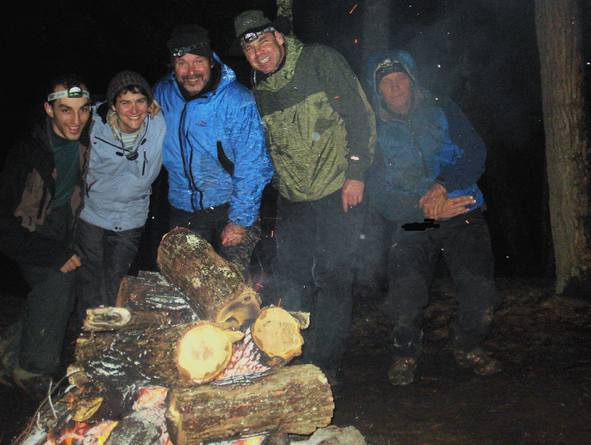 Looks like some major log burning at Injun Creek weekend before last.  Some pics require a photoshopping or they look like Doo.  I can see this group had some fun as Grady is about to break into his usual spiritual hymn.  This would be a short in saturday night event.

Now for the skiing in Colorado.  All I can say is PERFECT.  Powder days and bluebird sun.  What more can a group of skihappy Highlanders hope for?  We had a ski in, ski out pad.  You could walk to town.  Why have we been doing this the hard way all these years.  Best conditions of any spring trip the Highlanders have had.  We had all kinds of company from Deirdra to Buckshot Bill and Super Dave Ammons.  The Snow Gods blessed us for certain this time.