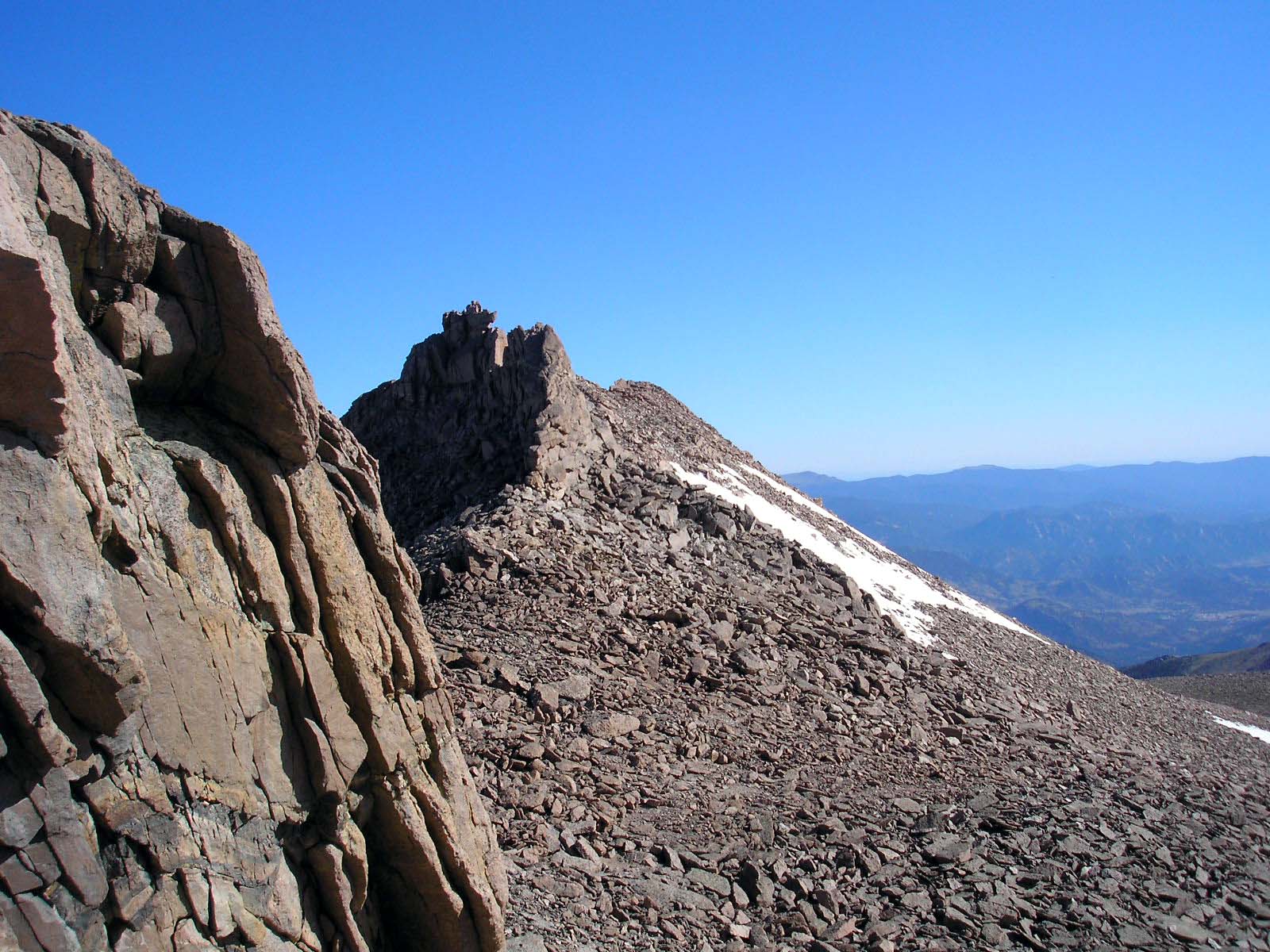 I'm sitting on a point called the "Keyhole".  It's 8:30 a.m. and I have been hiking/climbing since 3 a.m.  The elevation here is 13,400 or so and the day is beautiful. It is the summer solstice and definitely feels like the longest day of the year.   Behind me is the west face, which is still in the dark and spottily covered with snow.  there is no trail, only red and white bull's-eyes which are painted on rock boulders the size of small Volkswagen beetles because there is no dirt in which to place a signpost.  My lungs are burning from the altitude and I am dog tired from the 6 miles  and 4 thousand feet of elevation gain.  Sitting just below the summit ridge, the wind whips through the darkened narrows threatening to push me back down the boulder field which took 40 minutes to climb.  I'm thinking that for the first time, I 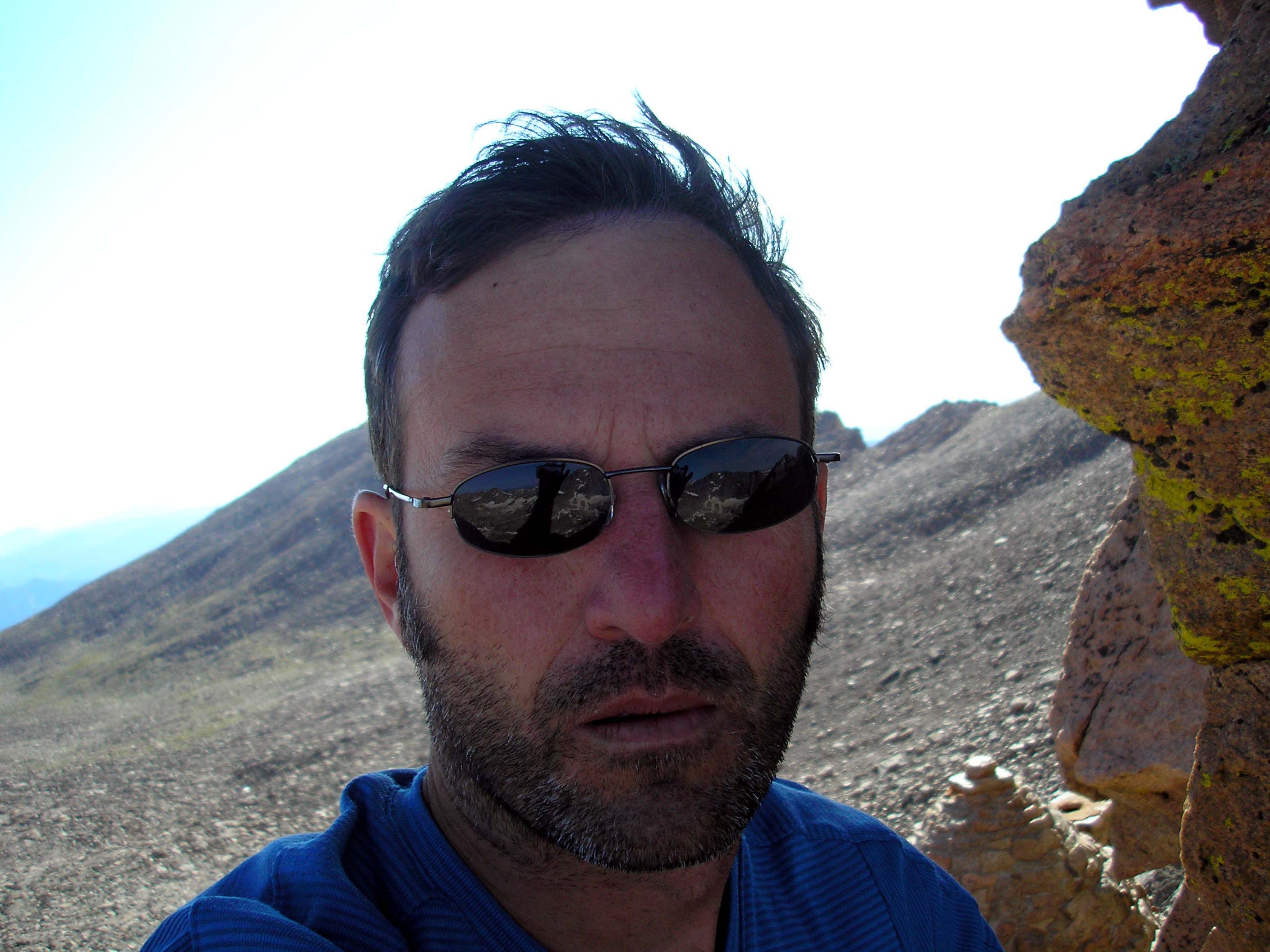 may not summit this mtn today. (decision time)

It began as an afterthought anyway.  A ride to Colorado with the parents and a consolation prize, bagging Longs Peak.  Two thousand miles in the car wasn't my best preparation nor was the lack of acclimatization, one night in Denver.  Estes park, at 7500 feet is better, though I slept none.  Enough excuses.  It was time to climb.  The temp at 3 am was 44 degrees.  As I ascended through the forest, alone, the trail was gradual enough and by the time I topped out of the tree line at about 11500 or so the sun began to rise and I was treated to some beautiful alpenglow as the lights of Denver faded to the west.  I welcomed the warmth of the early sun which would take an hour or so to fully crest the assorted peaks of the Rockies that morning.  as I traversed the ridge to the south, the trail climbed and I began to feel the effects of the altitude, briefly.  my daypack seemed unusually heavy.  I gave myself short, two minute breaks.  it seemed as if I were climbing well and covering a good pace.  when I reached the high camp, the trail disappeared and I picked my way to the base of longs peak.  several times, I overstepped the trail and had to backtrack.  by now I didn't need the headlamp, fortunately.  did I mention that I was wearing tennis shoes?  This wouldn't be an issue, ordinarily.  that is, until the boulder field.

There were tent sites carved out of the rock here.  it must have taken days to clear rock down to the dirt.  there were also solar pit toilets here, quite a surprise.  had to check that out.  only one tent was set up and I looked for occupants to point out the trail.  20 minutes later, two guys came up the lower rock field and told me that I was headed for that keyhole and would have to scramble up over the boulders as it was not marked.  I decided to follow them which brings me to the start of the story.

I was the only guy climbing solo today.  there were probably 6 other guys on the route that I had passed or passed me.  the last two were apparently camped in the boulder field and had gotten an early start.  they regarded me with surprise, being alone.  it wasn't until the top of that boulder field that I began to question the need to summit today.  I needed some more ankle support, my feet were getting twisted in the boulders.  I had another hour or so to the summit and didn't think I had the strength to return safely as that would add another two to three hours to the trip.  there was some technical scrambling ahead and no recourse should I injure myself, not to mention that I didn't have the most basic tools such as a compass or map.  after an arduous decision process, I decided to make the keyhole my personal summit.  it wasn't worth breaking an ankle on this summit.  that mtn would still be there for another time.  13400 would have to be my summit for long's peak, although this is not usually my custom.  you learn from failure and I learned never to overerestimate your time or ability.

the descent was tough, as I was very tired from lack of sleep the night before and fatigue which caused my ankles to blow out sideways every few steps.  this confirmed the necessity of my retreat.  I should change footwear and approach the mtn with more rest next time.  fourteen miles was the round trip.  my descent took almost five hours and with each half mile, the sun became like a blistering orb.  I craved the shade of the tree line which never seemed to advance to me.  when I finally reached the safety of that shade, I took a ten minute break to massage my feet and have some water and a snack.  passing several day hikers who were heading for the halfway point, I inquired about the lake at the trail split.  they said it was nice and that most folks don't even think about climbing longs peak in a day.  made me feel a bit better. 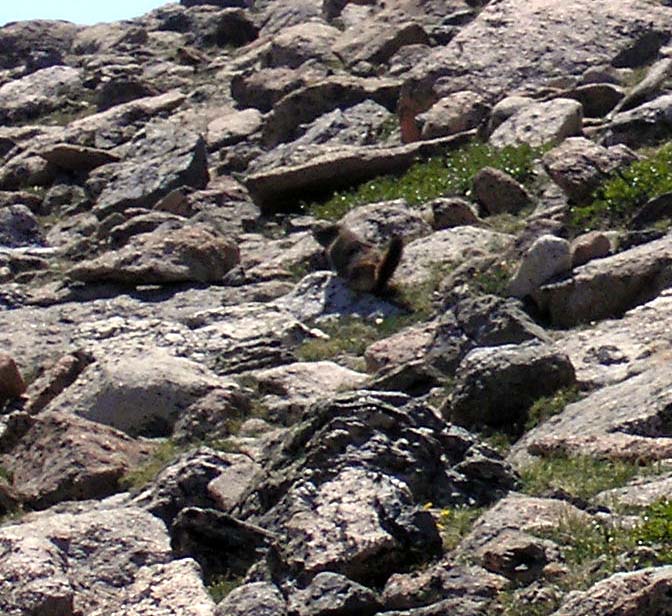 I had some company on the way down.  A marmot seemed to parallel my trail and I caught this picture of him.  look closely in the middle of the shot, you will see his tail up in the air.  Longs is beautiful, I suggest you all give it a shot if you are in Estes park, Colorado.