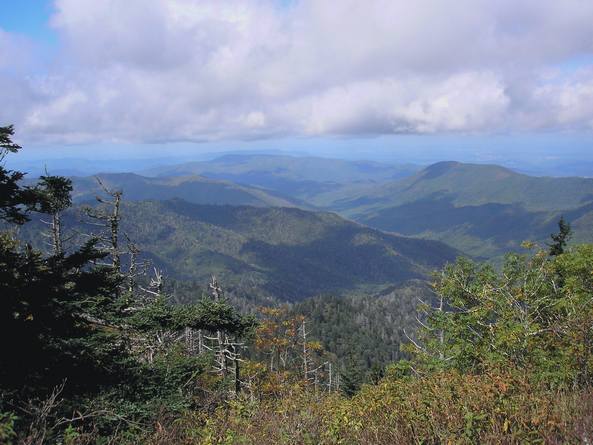 Kinda makes the rain days tolerable when the front blows on through. 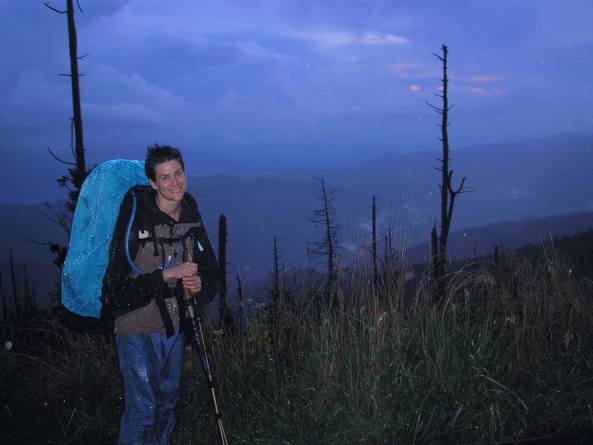 This is how it began though.  In the rain, rain, rain. 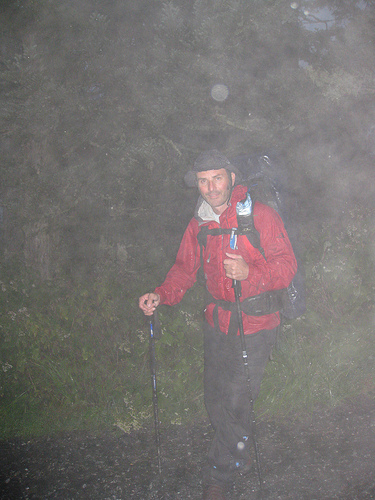 (Storm Crow is in his element, eh Ethel and Larry?) 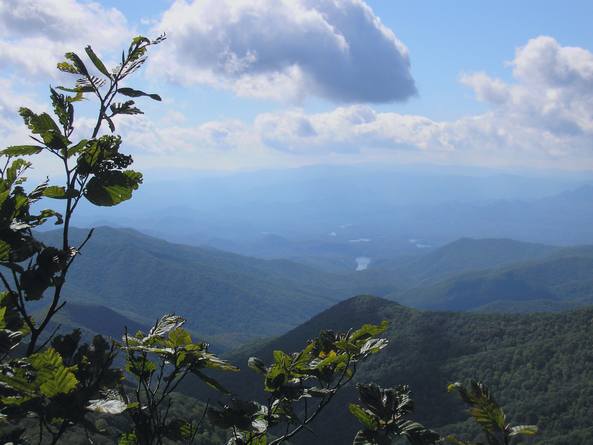 Walking out on Sunday, you can see the swollen Hazel Creek from several inches of precipitation.  You wouldn't believe that the preceding two days had been so wet. 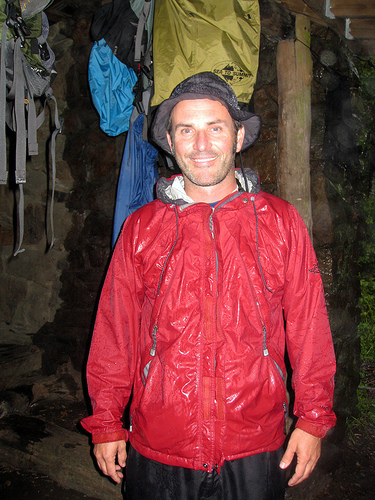 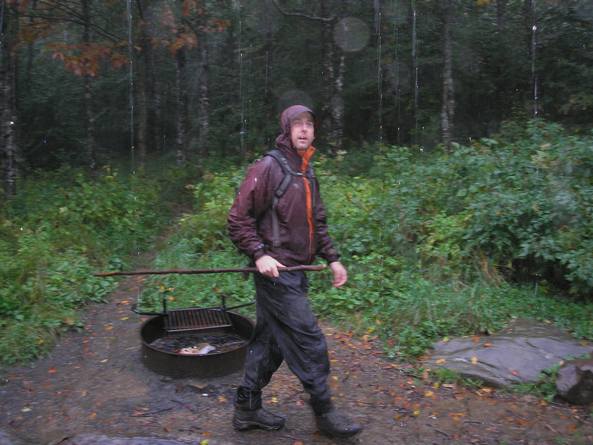 Umberger does his quit rain dance. 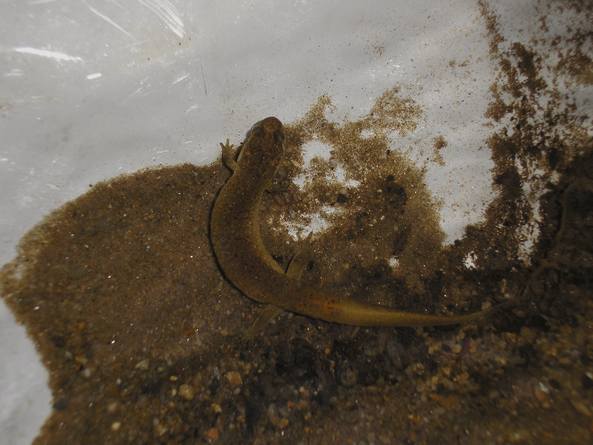 It didn't work.  This guy was a happy fellow during the downpour. 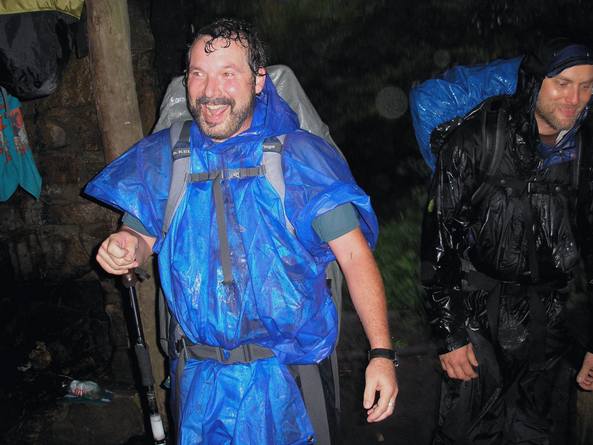 Grady and Ricky Bobby were happy to arrive at the shelter as the second group of Highlanders, passing the departing first crew.  You see, we don't want to displace anyone from use of backcountry facilities, timing our use of shelters in accordance with park policies.  They ascended Siler's Bald in a driving rain, much like myself and Jacqui, although we walked almost entirely in the dark. 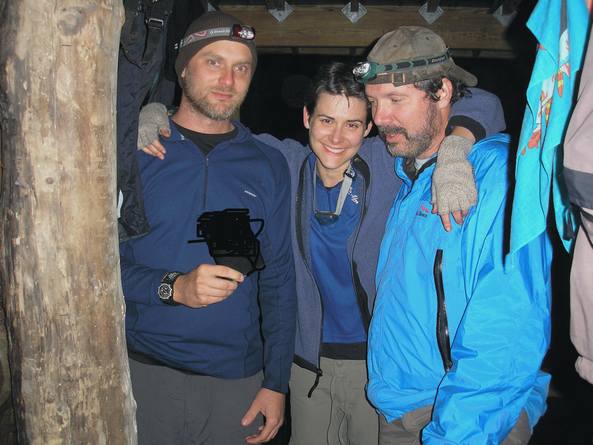 I think she was glad for the relief from us.  She now had some more female company. Bobby learns to knit and Grady is moved to song.  Here he sings Lou Rawls,  "You'll never find......" 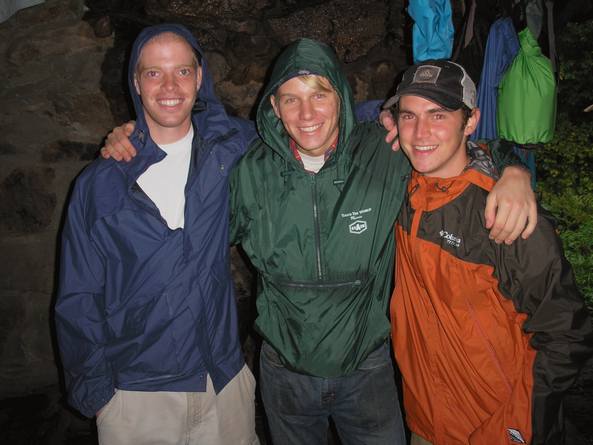 These boys are from Philly.  They paid us a proper visit and returned to Double Springs Gap.  That guy in the middle is Ron Howard's son,  Howard Howard. 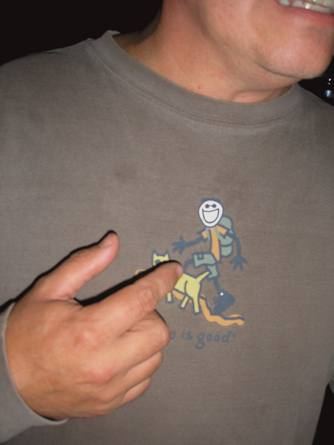 CJ Hawkins, the Indian Outlaw made this trip in the rain and nastiness.  I think the shirt speaks for itself.  None of us condone this type of activity, for certain.  I believe his assertion that if he can make a hike, having a family and two strokes, why can't any other lazy Landers? 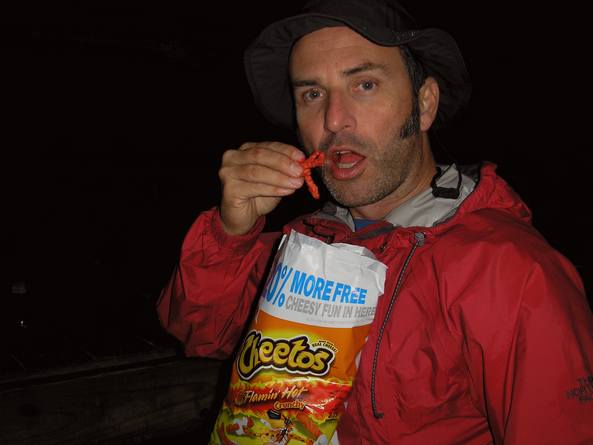 Flaming Lips concert in the Shelter. 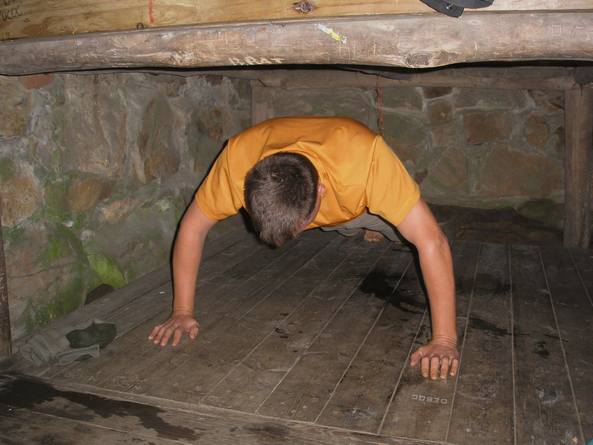 What do you do when in rains all day?  Push up competitions, of course. 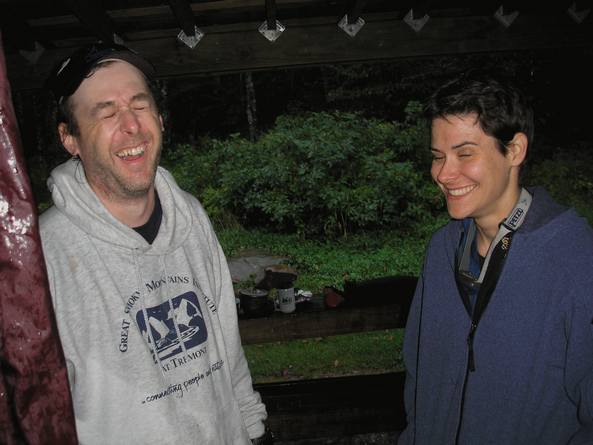 Then Kevin makes a better proposal. 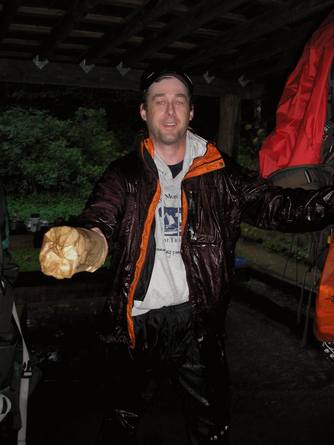 Give me all you wallets, I didn't walk up here for nothing. 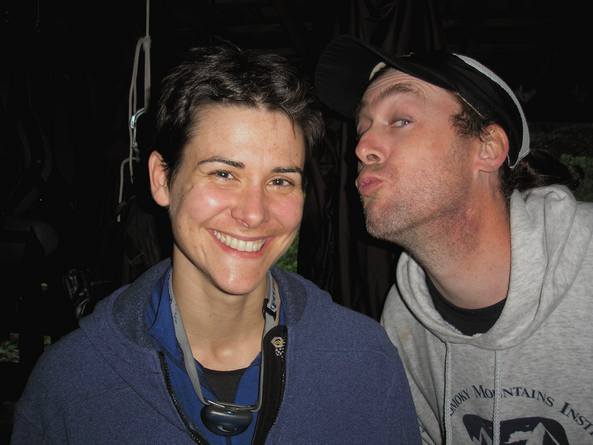 But he will settle for stealing a little kissey poo.  If only there were a little wine. 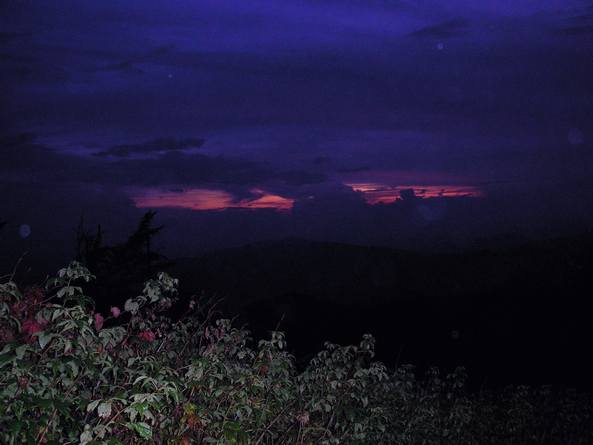 Sunset along the AT.  Dang good stuff. 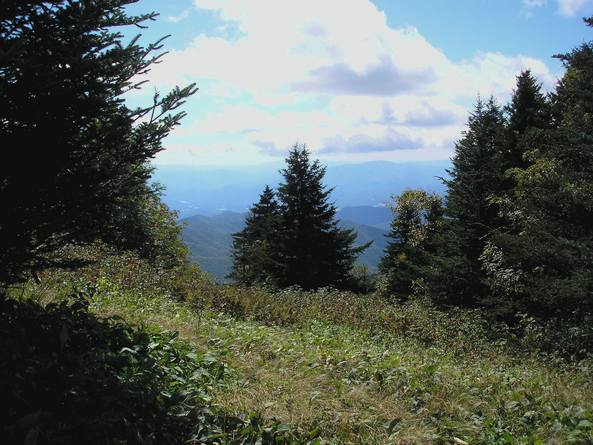 What about Fontana through the Balsams.  It sure smells like Christmas all the time. 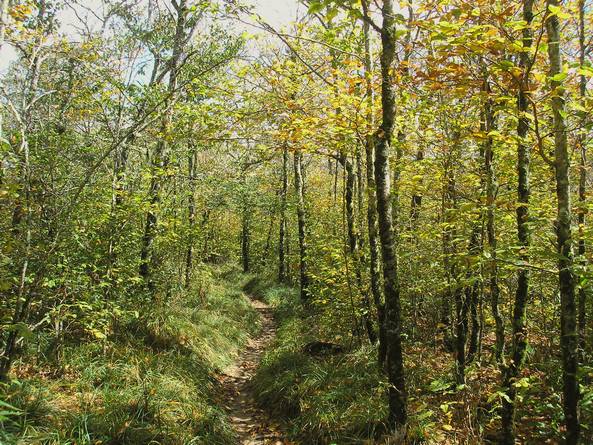 Fall is on,  can you smell it? 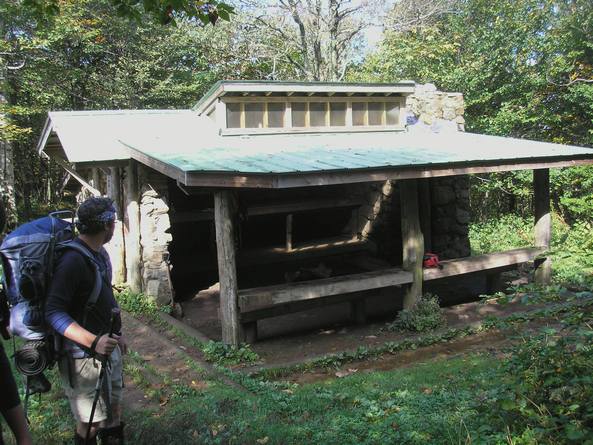 Grady hates to leave Siler's Bald shelter.  He was only able to stay one night, in accordance with Park rules and regulations. 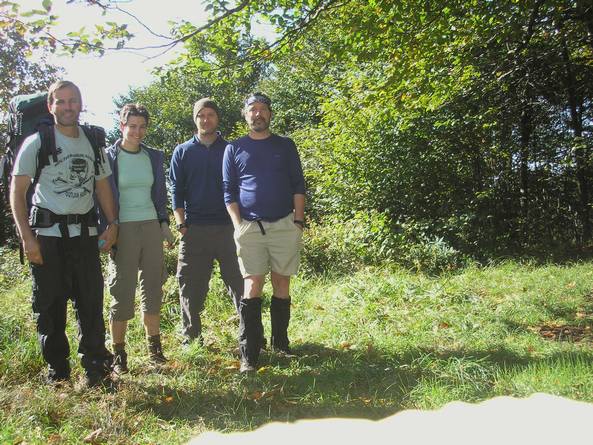 Here is the second shift at the Shelter ready to depart for our planned picnic at the Chimneys parking area.  This is a group of four people.  Four people.  I said Four people. 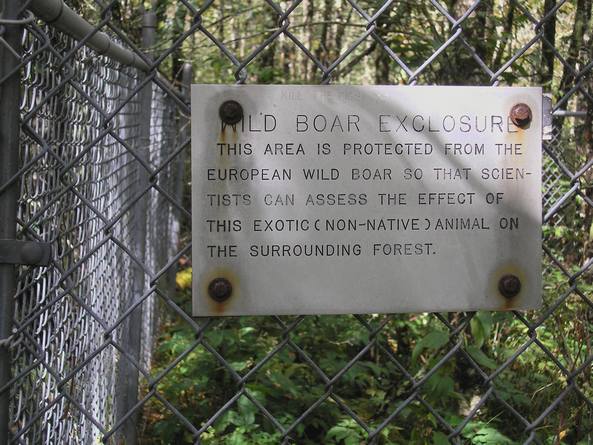 Right before Double Springs, there is this.  Too bad they can't have a horse exclosure.  Horses crap and introduce non native plants into the park as they are degrading the trails but never fear.  Ditmanson has decided to allocate the stimulus money for repair of the horse trails, so they can ruin them again.  I encourage everyone to attend this event at the Baker Center   Howard Baker Jr. Center for Public Policy    Let them know how you feel about park issues. 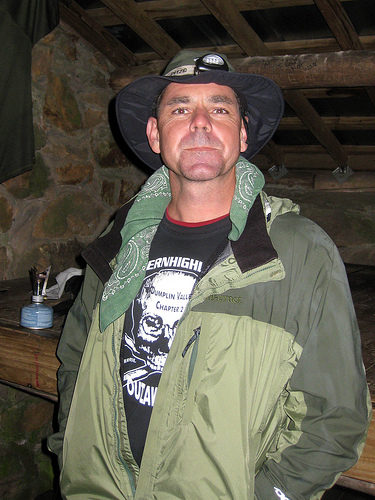 (President Dumplin does not wish to be gazed upon at certain times.) 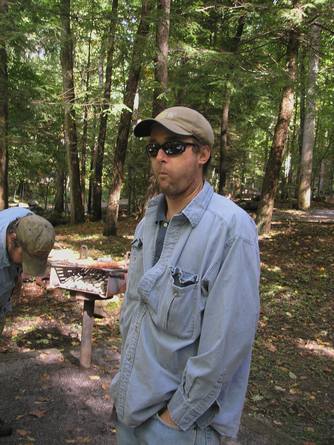 Returning the next day after making his hiking cameo in the driving rain, Kevin thinks,  "Umberger wants Sumberger, get to work Grady," 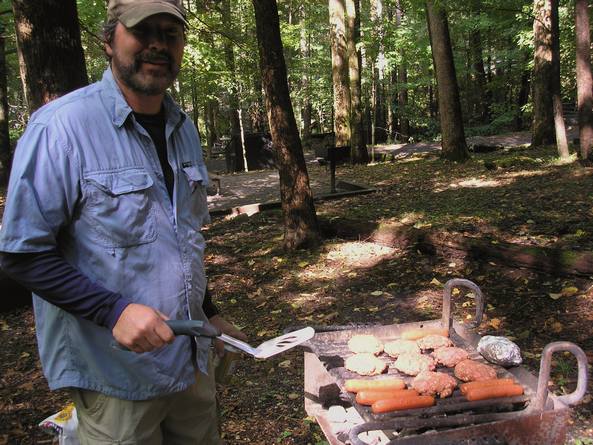 He  obliged, flippantly.  I am very pleased that after so many years of talking about the post hike cookout, we were able to pull it off successfully.  We missed Sally D but he had important family issues which required his attention. 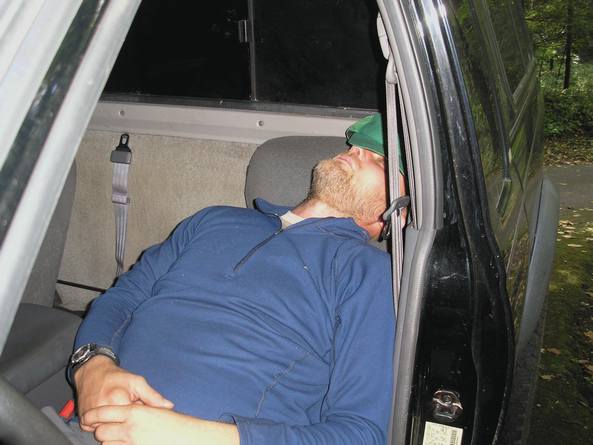 Bobby sleeps during the cookout as no one told him this was a meat intensive event.

Overall, a very wet but relaxing event.  Trail Stats:  A.T. to Siler's Bald Shelter, 4.8 miles each way.  Dave and George knocked out Welch Ridge and BC did about 19 miles on Sunday,  good work.  Sally Dumplin is nearing less than a hundred on the 9 hundred.

Kevin is on the Highlander fast track program.  Ask us about what he did and I think you will agree, he is definitely Highlander material.  Jacqui does not wish to be called Peppermint Patty and I for one will not condone this as a trail name for her.