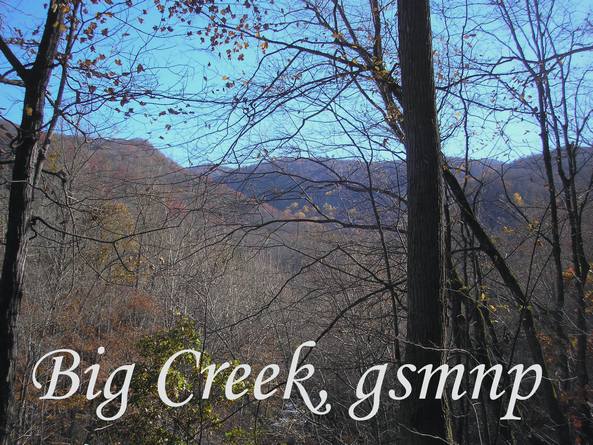 Finally, a great weekend.  Man, did I feel like we earned one.  I'm going to have to attribute it to this group. 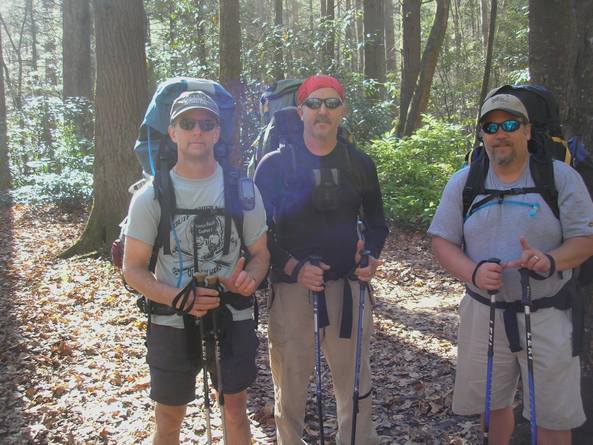 Our old friends and new permanent allies, the Muir Faction.  We were recipients of their good karma.  From left to right, Chuck Adams, Rocky Ledge and Marty Bunyon.  In terms of mountain windows, they nailed it to the wall.  Arriving on Wednesday night, we enjoyed the sights of Knoxville and sent them up to the Park in the good hands of Sally Dumplin, followed by BC George on Friday and the remainder on Saturday.  I know, like ourselves, they have paid their dues with the rain events because I joined them in one last spring. 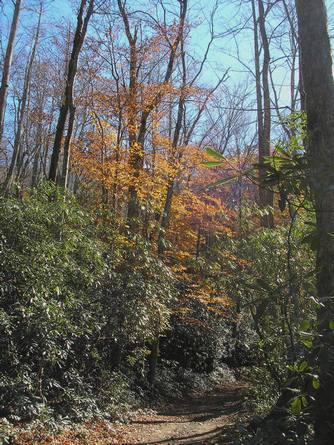 Some color remained in varying places along the Big Creek Trail. 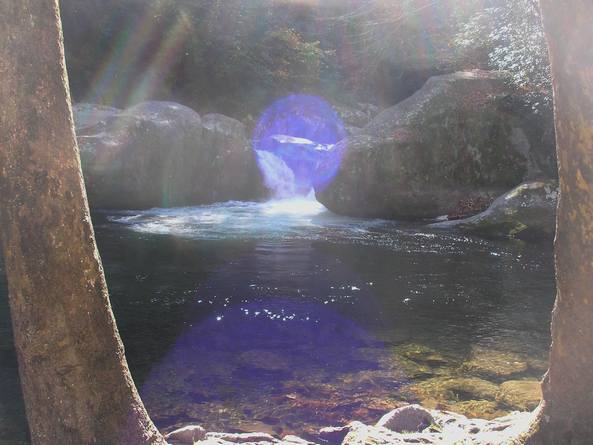 Midnight Hole is clear and cold. 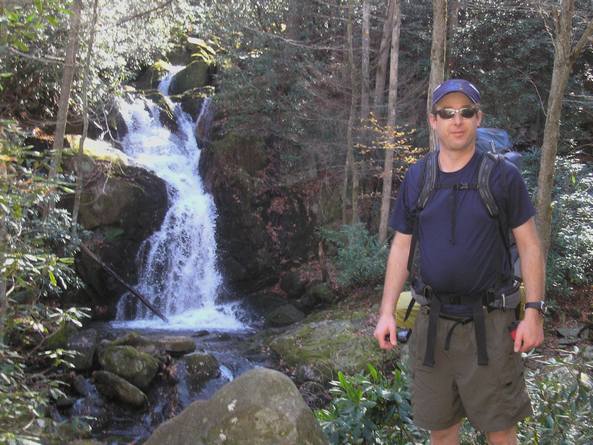 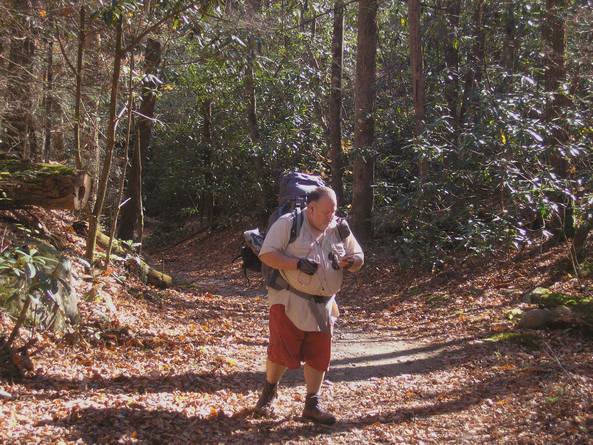 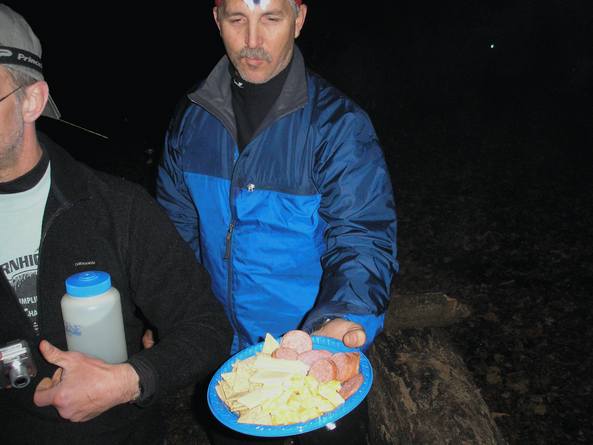 This is one of the many reasons we chose to formalize our association with the Muir Faction, the infamous cheese board.  It was determined by unanimous decision that the Muir Faction, in their tribute to Sir John, embody all the principles Highlanders hold dear.  Camaraderie, love of the Mountains, backcountry gourmet experiences, Firebuggery and.......... 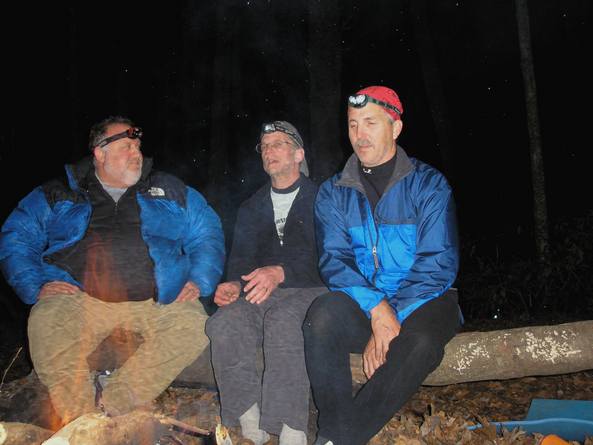 ...close sitting.  Here Muir Factioneers understand that Larry wants in on the action making an indecent proposal to Chuck who explains that, though interested in the various Dumplin Valley rituals, will stick with the SouthernHighlander standards of etiquette throughout the formalization procedures.  He suggests that Larry, although very masculine, is not really his type and wonders what this awkward moment could mean for future group relations. 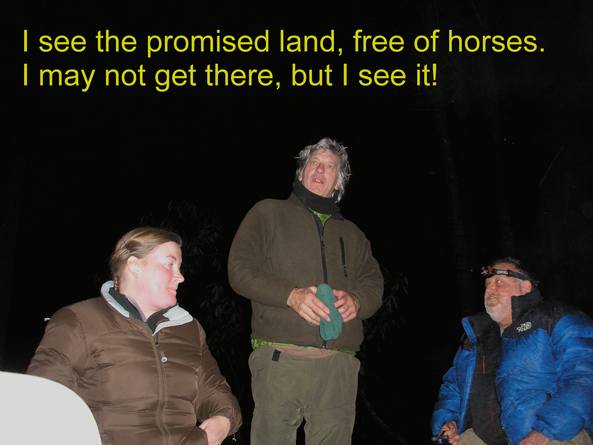 Hutchens has a vision and shares it with the group.  Speaking of horses, our meeting with the Superintendent happened Thursday and was enlightening.  I will speak more on that later. 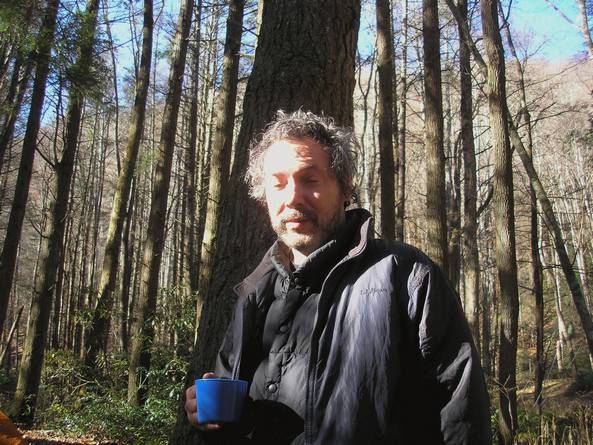 Reverend Grady observes the solemnity of Sunday morning.  He is afraid that this may have occurred.     YouTube - Sanford and Son - Fred's Treasure Garden 3-3 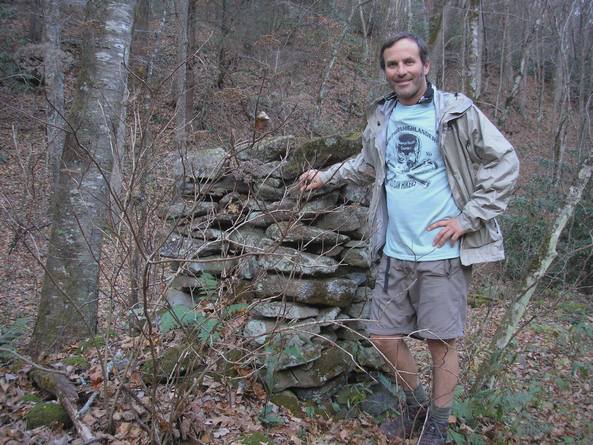 Kevin and I marched up towards Gunter fork but were repelled by the high water.  We found this up Camel Gap a ways. 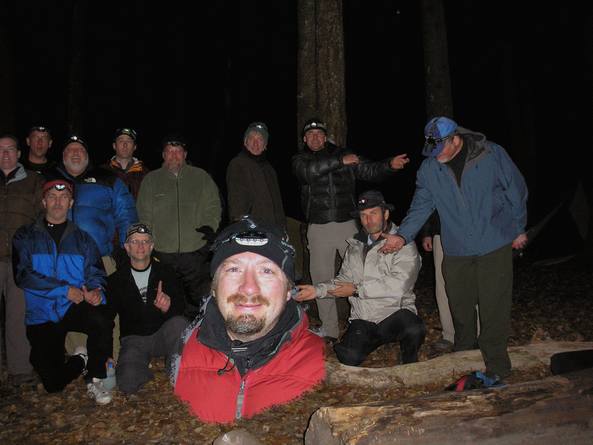 After much cajoling by the Muir Guys, we were able to conjure up the spirit of Scooter who graced our camp at the witching hour of midnight.  The Great Scooter promised the Highlanders that he will come visit us again when we least expect it, after monkeys fly out of Dumplins Duff.  The Great Scooter encouraged the new SouthernHighlander/Muir Coalition to boldly go where no Scooter has gone before,            outside of New York.   The Great Scooter prophesied that at a certain point in time, and not before, a chain of events will occur.  After that chain of events, we are to look in the Northern Sky on the 7th night after the new moon and following the plague of vermin and serpents, he will dispatch another sign. 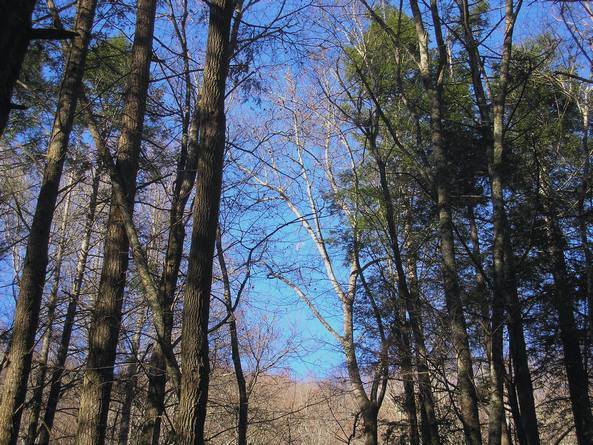 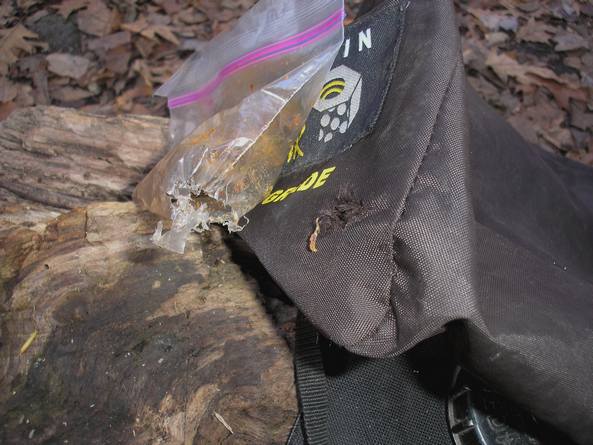 And sure enough, next morning, I experienced a hit to my food bag.  Apparently, Jerky Mike's concoction is just the recipe for that plague of Scooter as they gnawed through my food bag and Mike's tent just on smell alone.  The Great Scooter has apparently chosen us for a higher mission in his master plan. 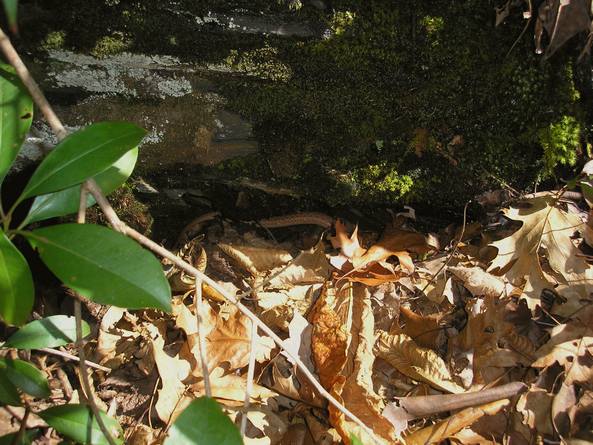 Sunday morning, the plague of snakes came to fruition in November on the Big Creek Trail.  (see that feller under the log) 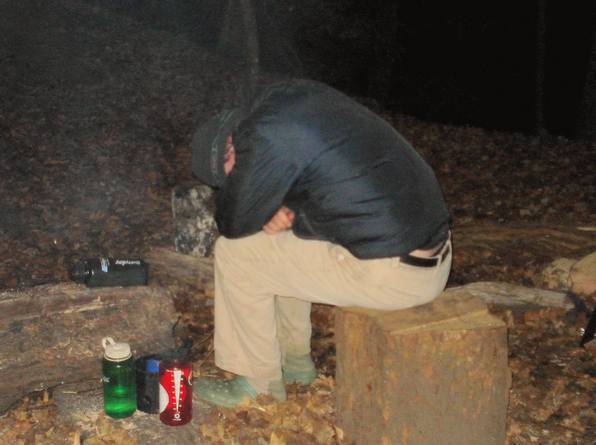 Grady weeps at the presence of Scooter.  His apparition is too much for Clark as he is overcome with emotion and thoughts of Jong Bonet. 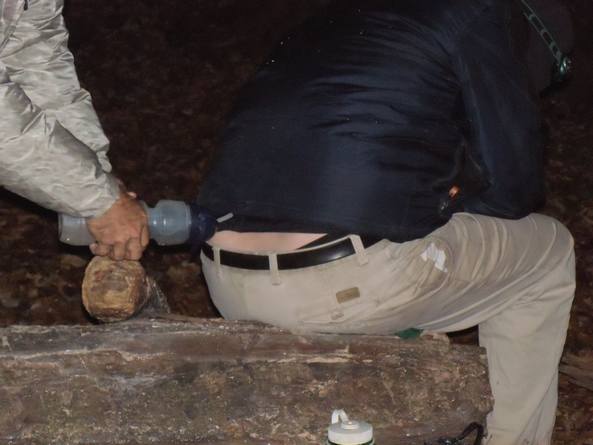 We find a way to snap him out of it. 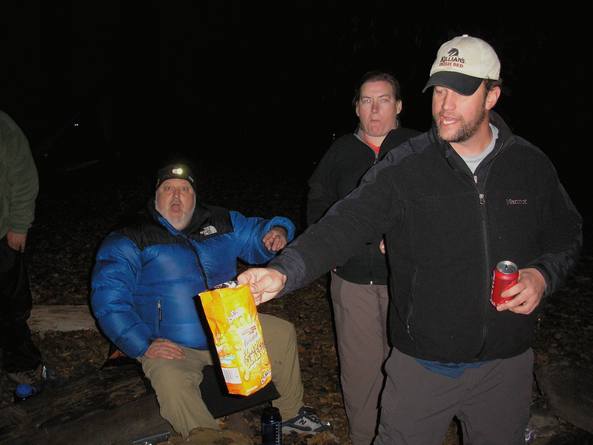 Will is able to perform some backcountry magic as he was touched by Scooter and makes the miracle of the loaves and Larry's, feeding the multitude with goldfish.  Here people look in astonishment as he multiplies the goldfish right before our eyes. 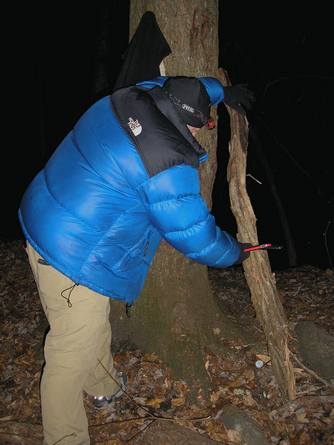 Other miracles ensued.......(Larry sawing.  I know, he is a novice,  we just couldn't tell him you had to saw it horizontally.) 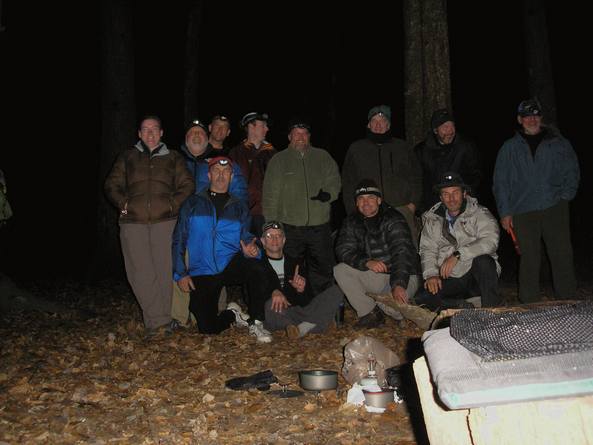 As far as Fall outings are concerned, this was the best yet.  It was great to be with the Muir Faction, heretofore known as the

representing backcountry values in the upper Ohio Region.  It is my hope they can be joined by Dan Walters who is battling some health issues presently in Cincinnati.  We wish him a speedy recovery.  It was nice to be joined by Will and Jenny and we look forward to their presence again very soon. 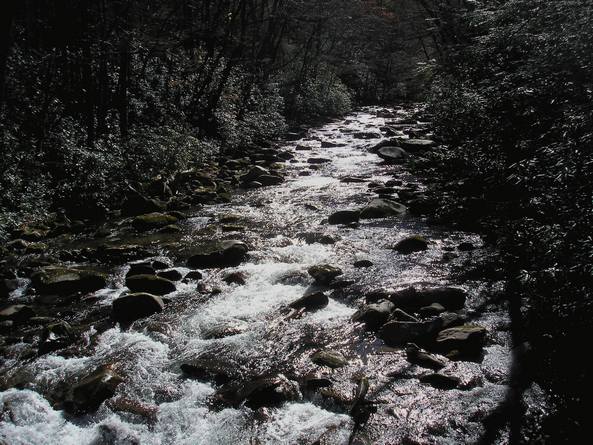 Thanks to all who made this a wonderful outing in the Great Smoky Mountains National Park.