Citico was a sparsely attended event, even by Dumplin Valley Standards.  It was a good time with great weather, the exception being Sunday morning, when the rain moved in.  Not that Uncle Larry was there.  He departed at 9 am on Saturday morning after unsuccessfully bagging more than one trout for fear of the front that would move in the following morning.  He was able to make it home for a nap by noon and out for steak and stout by 9 pm, dry as a bone.  He was accompanied by his CB, Grady, Jerky Mike and Skidmore.  The Clan Playa was sighted en route to Citico by Sally Dumplin on thursday, but alas, he was headed on a secretive solo mission as a speed data fisherman on a highly guarded secret mission.

In summary, Gobbie discovered that he will indeed utilize a Clairol Product to reduce the graying of his hair and cowlick.  Snappy only took one nap and no one was skunked on the fishing, including the silver skunk, Pat Moore.  Ab earned an advanced firebuggery merit badge and we had a secret celebrity sighting of Dennis Weaver, aka, McCloud.  Danno was busy with a black tie event.  He is apparently now a member of teen board.  Congratulations Danno.

I saw my favorite wildflower, the Crested Dwarf Iris.  I forgot my camera but this is a pic I stole from the web.  There were beds of them along the roadside of Citico creek. 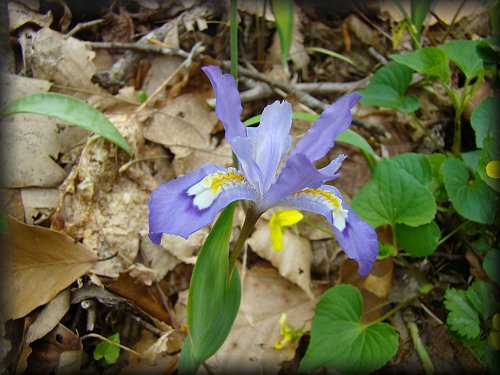 (Dave and crew are preparing for their Lakeshore trip and I am jealous as I will be unable to attend.  The weather looks magnificent for their Wed-Sunday hike.  For those who might want to do a Sterling trip on Saturday or something, let me know.  I am constrained by work obligations.)  Also, you might want to get up towards Schoolhouse gap.  I suspect the Lady Slippers are peaking.  George, Ethel, send me a link to pics and I will post them.