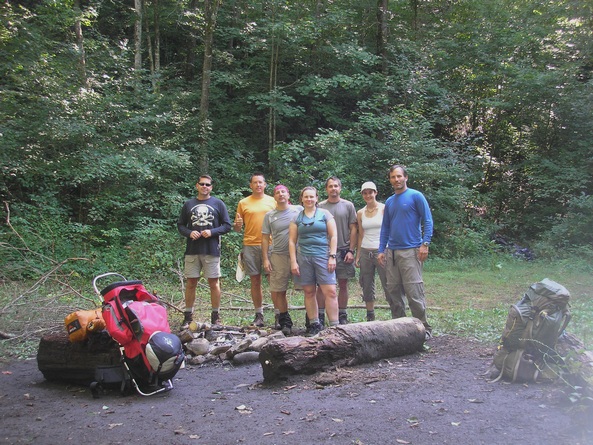 Highlanders are joined by Dawn, Kevin and Jackie.  Dawn is a friend from way back and we joined her a while back at Derrick Nob on this trip.  They're good folk and allowed us to follow them up the Fork Ridge Trail on Sunday morning.  We were then forced to "meetup" with them for a late lunch in town.  Their group has over 300 members.  I told them that if you counted our inactive roster we would come close to 30. 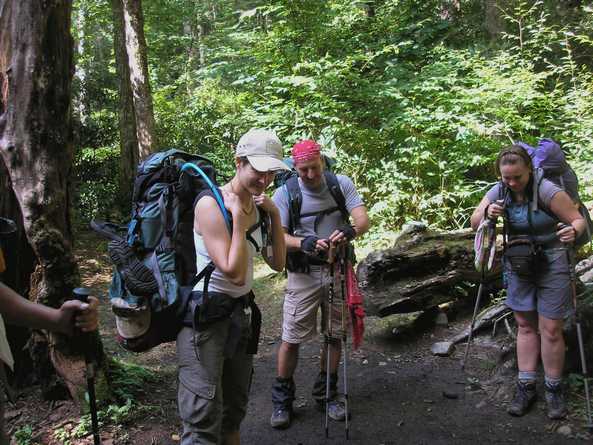 Here they pause to wait on High Speed Bill and myself. 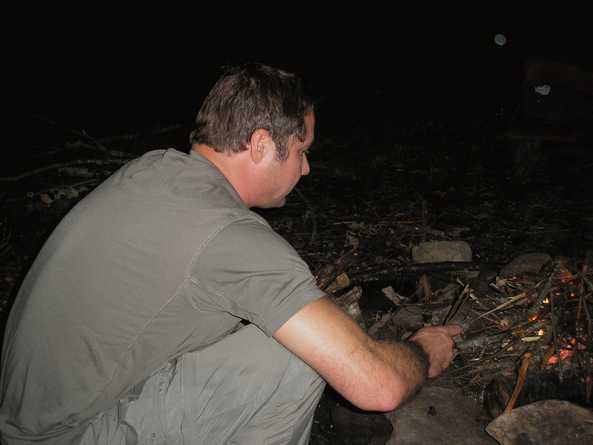 Bill is back on the trail after a 3 month hiatus in preparation for his party.  It was a tremendous affair, largely due to the selective guest list he prepared.  Here, he selectively prepares the fire in keeping with Highlander traditions regarding newbies.  We also had him fetch water and set up our tents.  Bill, next time, I would prefer to have my bag fluffed 15 minutes prior to bedtime.  As a result of his camp duty performance, Sally Dumplin allowed him to remain a member in good standing, replacing an older member who was retired. 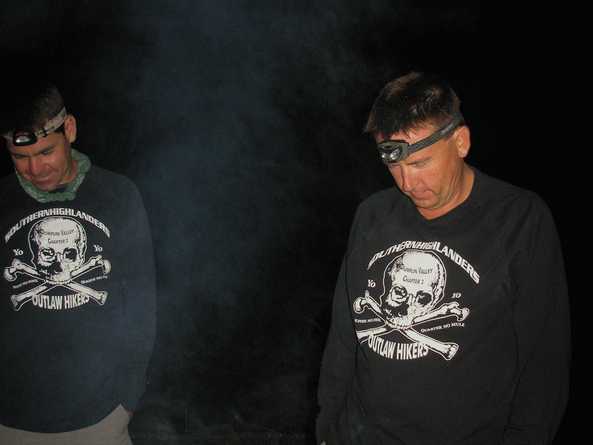 George and Sally D bow their heads and respect a moment of silence for the absence of the Mantourage.  Although we would have liked to have Grady and Larry join our ensemble, we understand the demands, er commands of being "on Call". 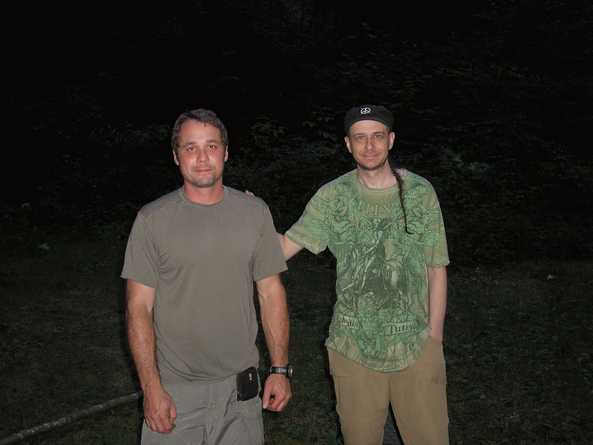 This is another reason that I wish Skidmore and Grady could have joined us.  Pictured here is our new friend from Manhattan, Garius, who owns a couple of recording studios.  It just didn't have the same effect, you  know, me singing Brave New World, for example.  As Garius said, "I am always looking for a new sound."  Oh well, guess it just wasn't to be as I closed with a rousing rendition of "Market Square",  Garius said,  "Now that's what I'm looking for, anything other than that Hackensaw Boys crap everyone sends to me."   I hope that Garius enjoys the remainder of his multi day family trip.  They are very nice folk. 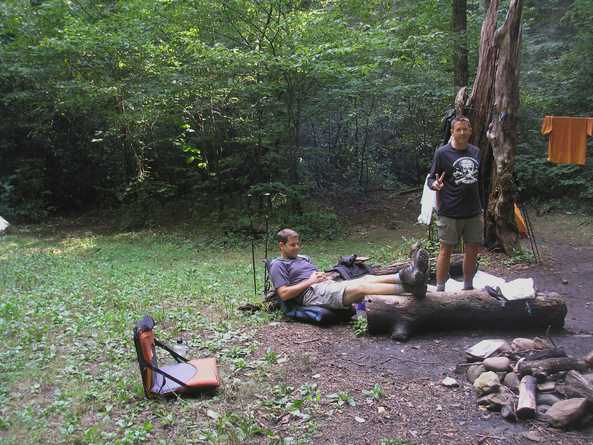 George looks like he is hiding something.  In reality, George and Dave got some new miles.  Dave is on track to finish his 900 this year.  George is close behind.  Had George not run down the trail to bag a total of 12 miles on Saturday, he would not have hooked up with Dawn and crew and we might have missed them.  On the other hand, George is a punk.  That is what he is hiding.

Dave sits smugly.  Not so fast, Dumplin.  You aren't done yet.  I'd suggest you get off that Duff and get walking, lest BC George passeth thee by. 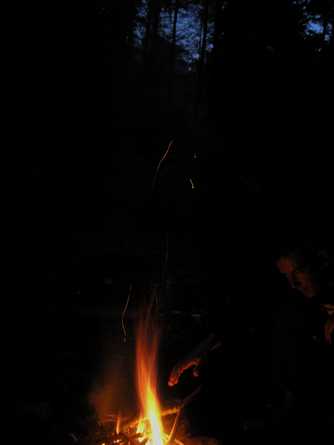 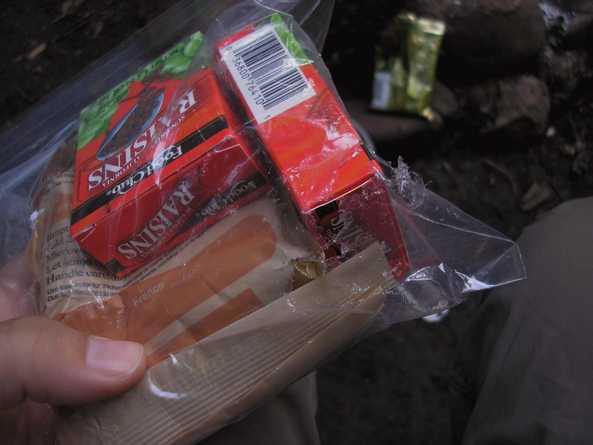 A wee bit of mouse damage to my oatmeal.  I also sustained Moth damage to my tent.  That really bites.  He gnawed a hole big enough to allow a mouse in there now.  I might as well store my food in my tent and fight the buggers mono a mono since they seem to be able to ascend the cables quite freely now. 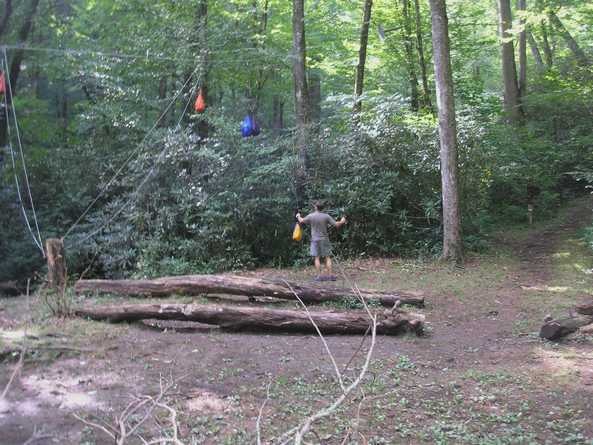 I have no idea how those mice could have gotten into my stuff.  It looks like a mouse circus set up over there with chief Mouseketeer William directing the show.

It was a tremendous two days with absolutely perfect hiking weather and get this NO rain, Larry.  Very nice to hang out with Dawn and crew, look forward to sharing another fire with them along with Garius and High Speed was a welcomed addition after his hiatus.  It was his idea to take the long way out so the trail stats are:

New SouthernHighlander Bumper Stickers are In 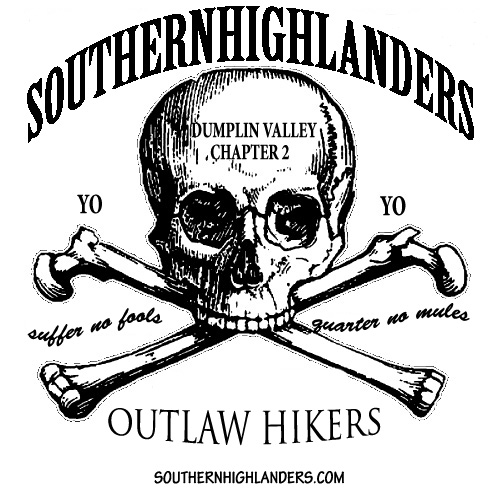 This is a picture of the new bumper stickers that Jerky Mike and I got back from the printer last week.  They are a 4 inch oval design and look exactly as pictured above.  Perfect for bike helmets, mugs, automobile windows, bumpers or the back of your head.  They are two bucks each or three for five.  Get them while they last, email me or see Jerky Mike.

I will now leave you with a little present, from the past.  Ask me sometime and I will explain my connection to the contributing photographer who preceded the development of the Smokies.   Enjoy  this.