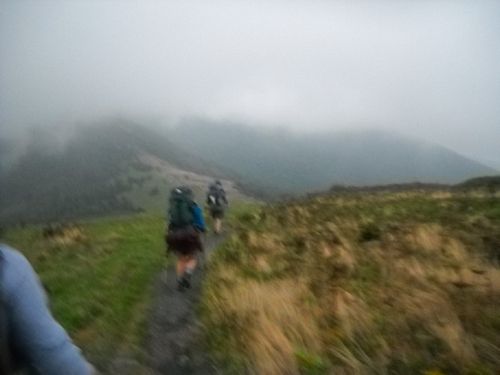 I believe that Grady and I paid everyone's dues when we walked to this point in June in a driving storm.  By the looks of things here, you would think it a repeat but alas, the weather cleared.  Beginning at Carver's Gap (5800 feet) we walked into the wind and night doing five miles in a little under three hours.  We bypassed Stan Murray Shelter as there was no water and marched on to the OverMountain Barn with headlamps a blazing. 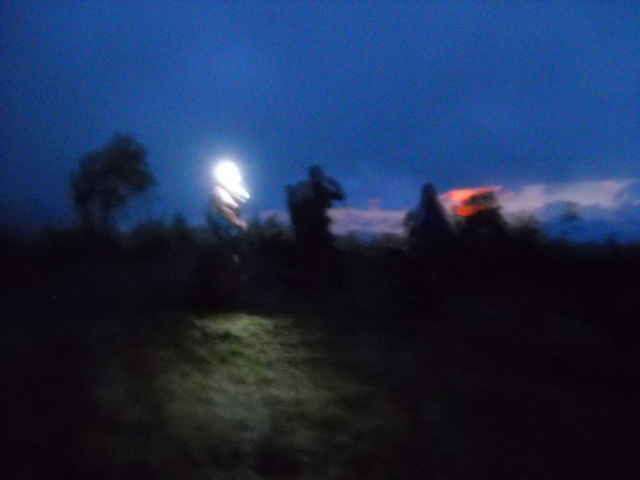 Crossing the high balds at night was surreal.  Some of us had a bit of night hiking experience.  There is a lot to be said for it.  You have different sounds in the forest and  you have the rhythm of your feet to keep you company. (That orange is the setting sun) 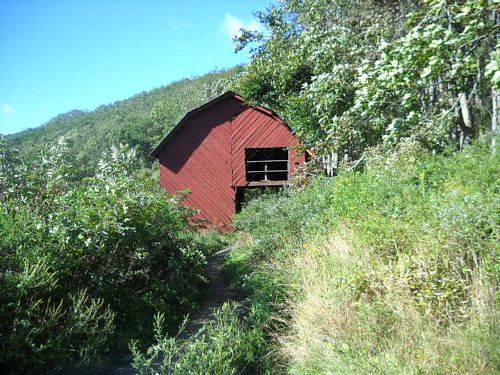 This is the fabled Overmountain Shelter.  A reconverted barn, this is one of the more famous of the AT huts.  We opted to ground sleep.  That's why we carried those tents in the first place. 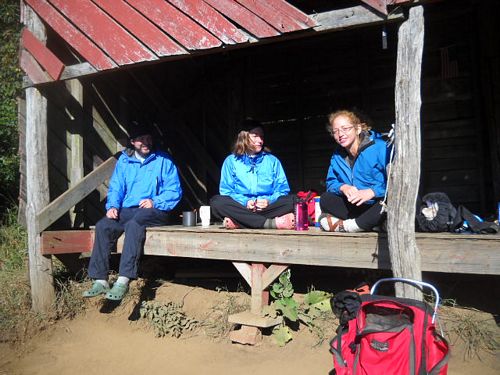 Not that it didn't keep us from socializing with the occupants, or, in Highlander terms, take over the joint.  Please notice the red pack, famous now for being the one my brother Dave lifted from a yard sale for 5 bucks.  I'm afraid old Red took a beating on this trip and may have seen one of her last sojourns.  She was aged to begin with and took two hard years of SouthernHighlander backcountry adventuring.  I'd say I got my brother's money's worth. 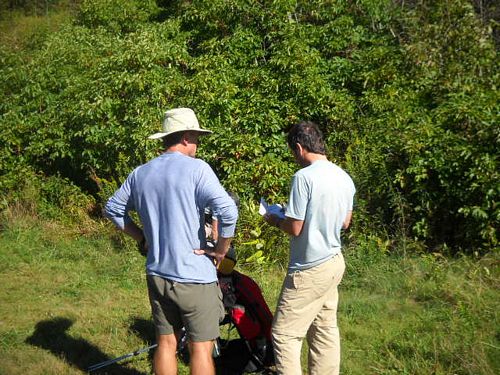 Chuck and I try to read the map.  Like it matters.  Mileages on this trip were, estimations at best.  Day two was to be a big one, fifteen miles at least.  We don't need any stinkin maps.  Okay, maybe just a little look. 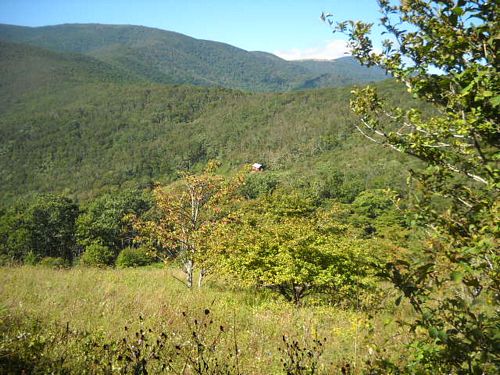 A mile later, the overmountain barn was in our rearview.  We shall climb on. 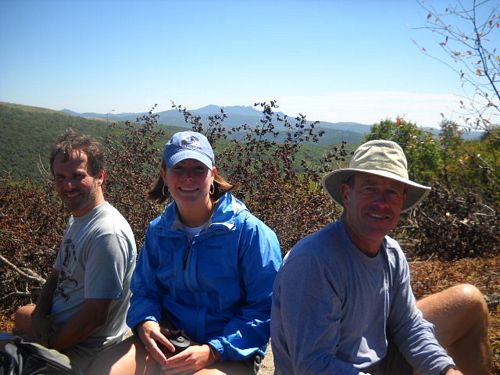 A little break before assaulting the humps.  This is Kathryn's Dad, Chuck.  He looks a bit happier than last time I took them on a little hike.  Some might call it bushwhacking.  Chuck might call it something else. 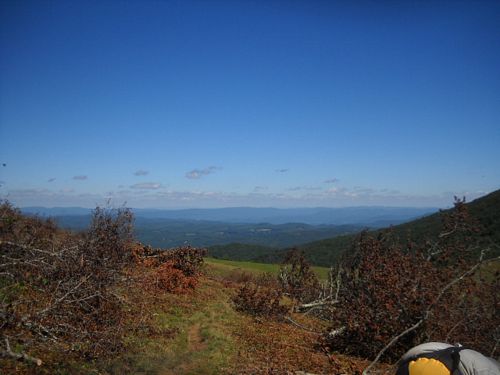 By the way, when I came to this recent clear-cut I was reminded of something else.  Then I thought, what does this have in common with Hangover?  Oh yes, they are both managed by the Forest Service.  Silly me.  The forest service cuts trees.  That is what they do.  They cut trees and give trees to be cut to the timber industry.  Stay focused. 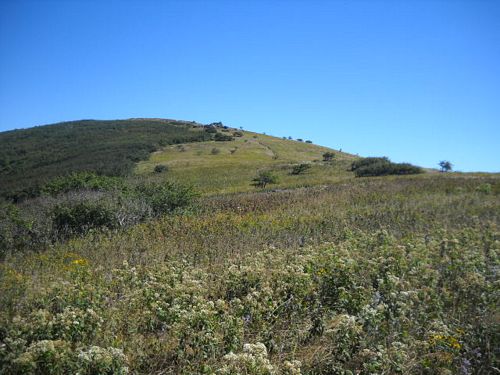 The Big Hump.  Man was it fun.  The wind here was amazing. 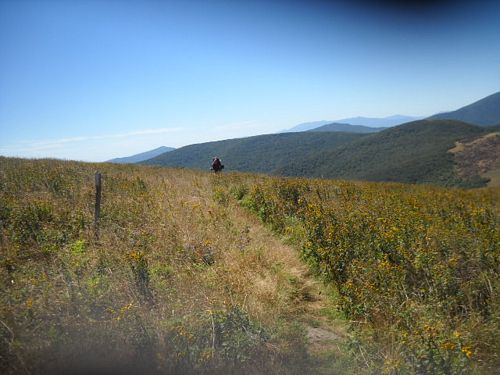 Cresting the first of many hills on the hump.  How about that landscape and lack of humidity? 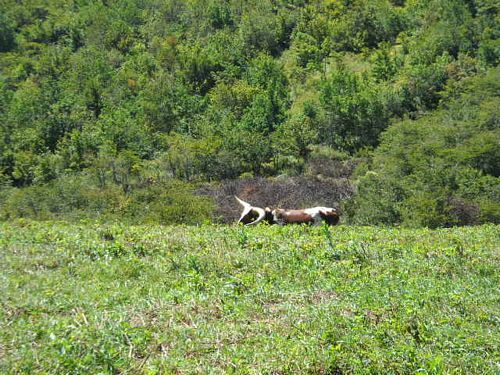 Strange sightings in route to the top.  I could have sworn I saw a steer or a character from blazin saddles.  Somebody punch that cow! 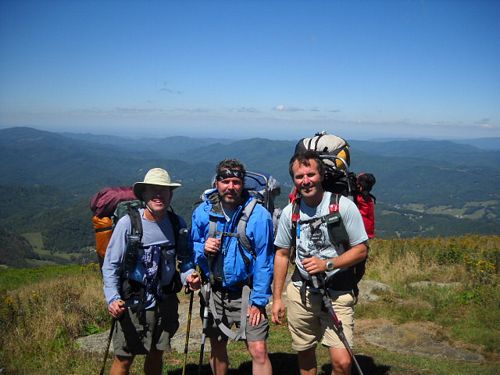 Hump Hikers on top of the Big Hump.  Can I get a Harrump?  Big Humpers here. 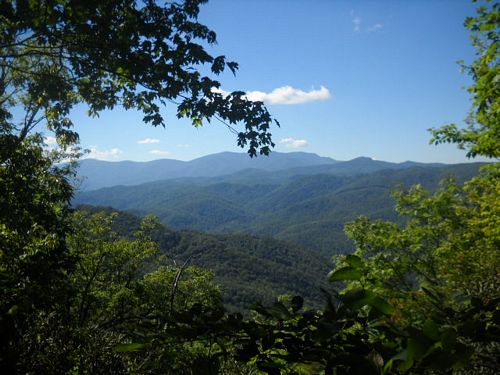 This is a view of the Big Hump two days later.  We had hiked that far away from it. 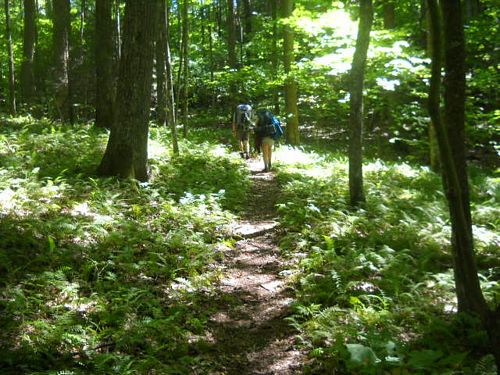 Of course we dropped back into the forest and Fernanza!  I love those ferns.  It means big trees and such. 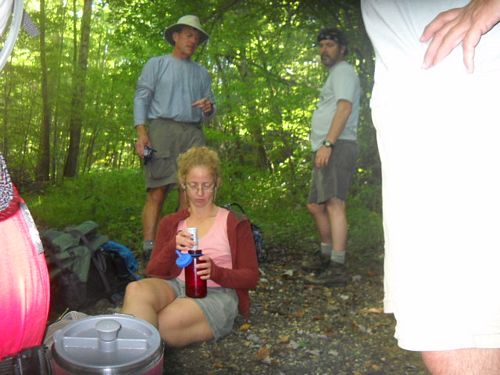 Kirby demonstrates the efficacy of the steripen, Grady's newest purchase.  I am so glad that Grady is going to purchase this item.  Chuck and Kat sold him on the idea.  You are a smart man for purchasing one of these Grady.  I'll bet you could even talk us into carrying batteries next time.  this one, is Chucks, though.  You can't have it.  Go back to your tent, Aunt Jemima.  I know it looks good. 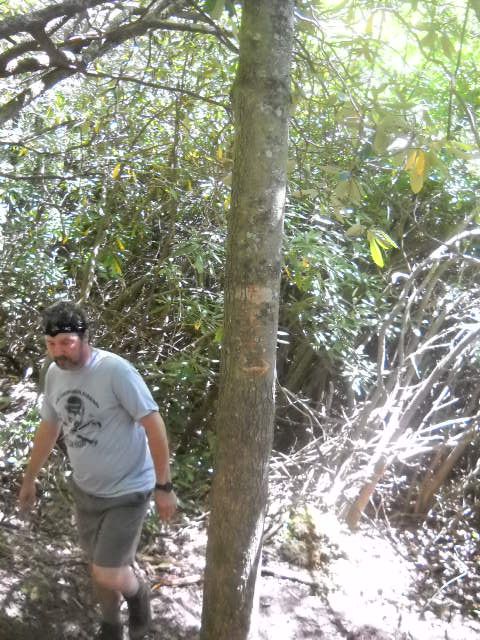 Not that we didn't have a few issues.  Day three found us bothered by that old Highlander nemesis, the yellow jacket.  Here, Grady is seen heroically retrieving Kirby's belongings after she took fifteen stings to the legs.  Wow, fifteen.  What a trooper.  Kathryn got three and Chuck got three.  We escaped this round.  Too bad that sign on the tree wasn't on the other side.  See it? 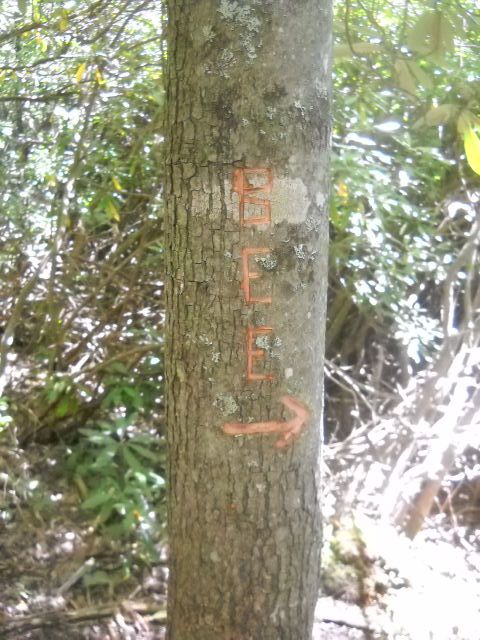 Yea, a little late.  They were a swarming good.  In September we get to deal with those at times.  I'll say that the girls and Chuck handled it well.  We had Benadryl and Kirby had a surfeit of homeopathies.  It was a form of backcountry acupuncture. 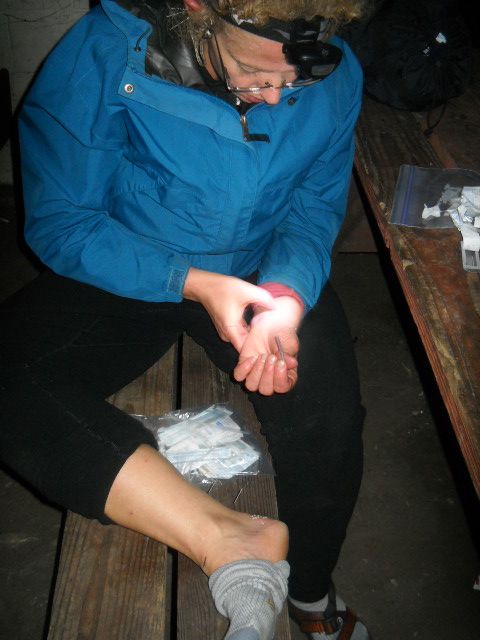 However, Kirby insisted on busting out the needles anyway.  What a masochist. 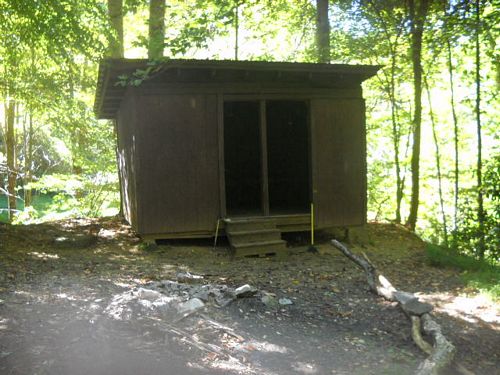 We skipped some shelters.  After all, we had done a five mile night hike, a fifteen mile hump and today was to be a twelve mile day.  Of course, it was one of those days when twelve miles took us from sunup to sunset.  You see, the mileages on the AT books are estimations.  I can usually do at least two miles an hour.  We were averaging 1.25 which told me the mileage was off.  Our destination was the last shelter which would put us at 6 miles out on Monday. 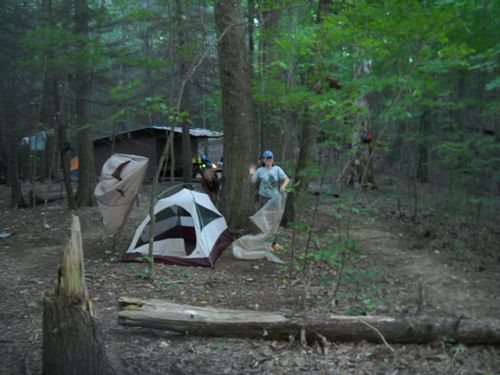 Getting to this shelter was a real pain.  Several of us had foot issues.  For me, the issue was my boots.  I have apparently grown out of them.  I noticed that I had increased a shoe size over the summer and thought my boots might stretch for me but alas, twas not to be.  I hiked the last ten miles in my crocs.  For Kathryn, she had blisters and Kirby and Grady fared a bit better.    So far I've worn out a pair of 300 dollar boots and a 5 dollar backpack on this trip.  Also, water was an issue.  Due to the recent lack of rain, the springs were kind of dry.  The first shelter was completely dry and this one was but a trickle.  I did the dip and sip thing along the way, opting not to tote the platypus full due to weight issues.  It worked okay.  I am accustomed to hydrating at breakfast so I can go like a camel if necessary.  Having a filter bottle allows you to dip and sip at leisure and for the most part I was able to take advantage of little seeps here and there. 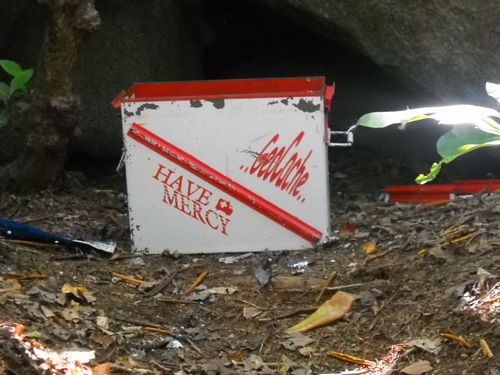 Some call this a Geo Cache.  I call it Geo Trash.  Were you to see the accompanying litter, you would understand.  I like the concept but application of that hobby seems to need some perfecting.  Have mercy, I reckon. 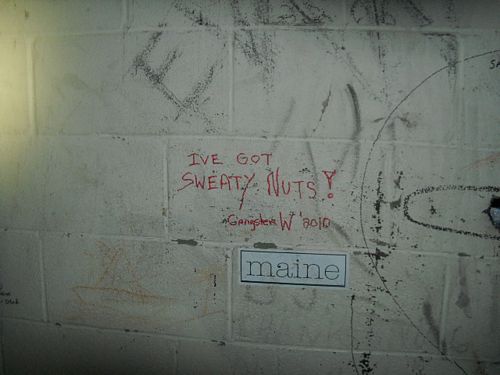 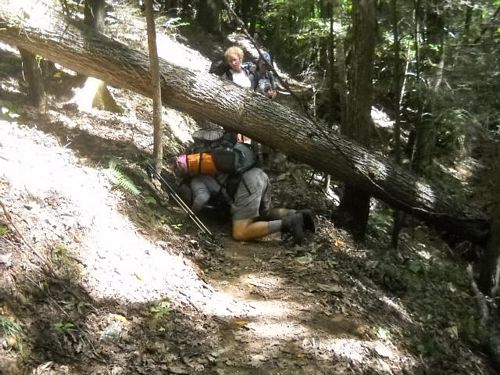 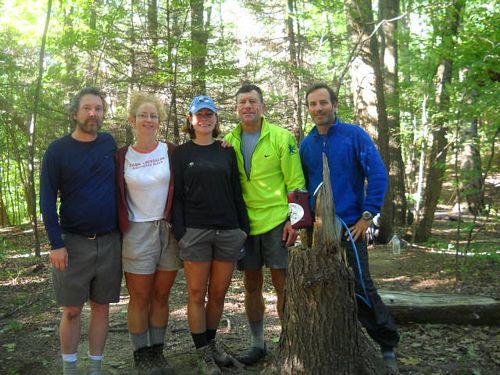 So this is the Hump Hike 2010 crew.  They did great!.  Kirby comes out of grad school with no hiking in a year to bust out 40 good Appalachian Trail miles with 15 yellow jacket stings, same with Kat.  Chuck, Grady and myself did well to keep up with them.  We had a great walk with some wonderful views.  The variation in topography along this section is remarkable.  From High balds to river bottom.  We bivouacked at the Elk River.   Mountaineers say that Bivouac is a French word for "mistake".  I wouldn't call what we did a mistake.  We made a great backcountry campsite, forgoing the other one because it sucked.  The Father and son team that we passed decided to stay there though.  In the morning, their fire was still smoldering because they were too lazy to go down and get a satchel of water to douse it.  Chuck took care of that confrontation with them.  He's like me with the dog and horse people.  I was impressed.  He also arranged our shuttle.   Driving to Hampton earlier in the day from Charleston, he arranged to have his car deposited at Dennis Cove then was driven up to Carver's Gap where we met up with him.  We found a shuttle service on the web from a man named Sutton Brown.  Sutton didn't disappoint.  I think it cost Chuck about 65 bucks and an earful of Southern preachin.

So, in summary, we had a 60 year old, two 44 year olds, a 23 and 35 year old.  Point being, there is no excuse whatsoever for not hiking.  Don't get time to exercise?  Get out and get into trail shape while you hike.  It can be done.   Highlights for me on this leg were the exposed Balds, river bottoms, undulating trails and Overmountain Meadow.  We had the most perfect four days of weather you could imagine.  It was in the forties at night once.  How refreshing to want to get all the way into your sleeping bag.  My pack weight was 36lbs without water.  I have been bringing too much food.  Oh well, I ate well.   Congrats to all the Hump Hikers and best wishes to our Friend Andrew as he completes his chemo.  We will have him back out with us soon.  Here is a link to his blog.   http://www.andrewmacdonald.com/