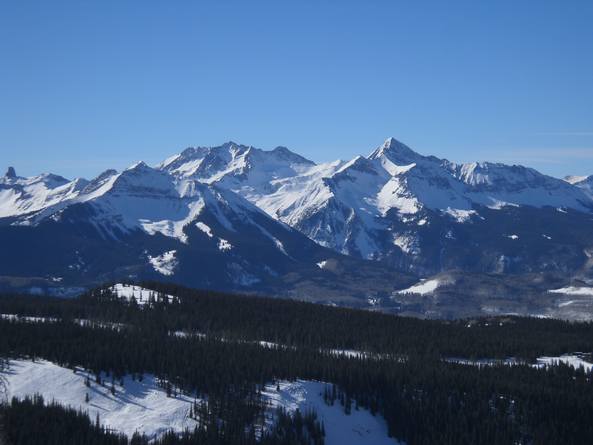 My old Friends from Denali, John Davis, Dan Walters and Neil Murphy had been inviting me to join them on their second annual pilgrimage to Ouray, Colorado for a week of ice climbing.  I saw their pics from last trip and it sure sounded like a good time so I booked a flight, packed my harness, screws and skis and away I went to the San Juans for a week of Southwest Colorado snow play. 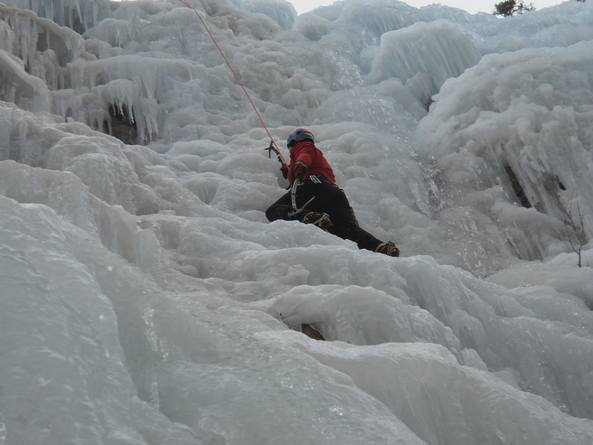 Here, John Davis makes things look easy as we play around on some WI4 or so.    Info on rating system here.

The Ouray Ice park is world famous and works like this.  A canyon from an Uncompaghre river tributary snakes its way from the base of Mount Sneffles.  The town pipes the 175 degree water into town to take advantage of the thermal properties and create a pool for the natural hot springs which are FANTASTIC, by the way.    Although there is natural ice down the drainage, some leaking of the pipes created freezing and alas, a great idea was born.  There are hundreds of routes on this area and best of all, It is free.  Right up my alley. 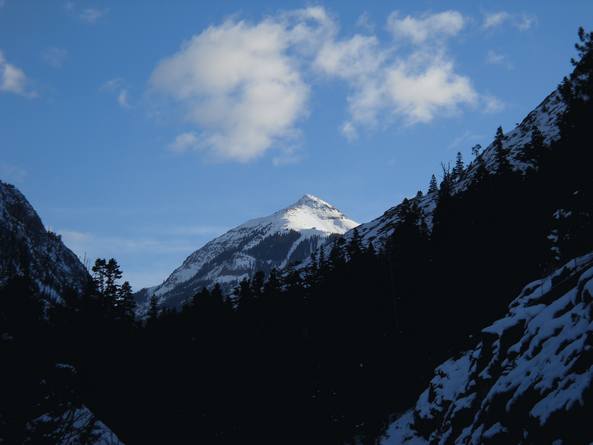 This is Mt. Sneffles looking out from the ice canyon.  It is a fourteener and I would like to return for a winter ascent. 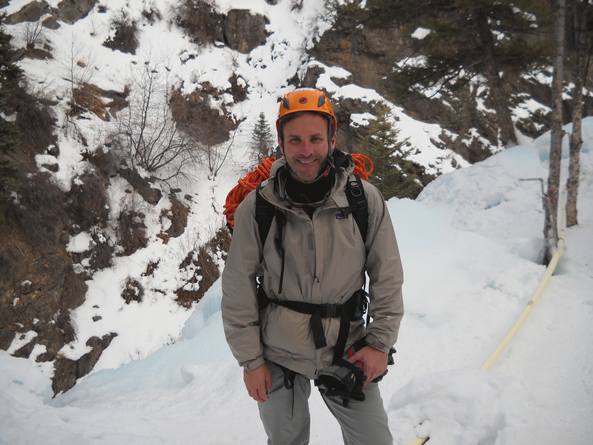 When you reach the ice park there are two rules.  Helmet up and crampon up.  It is slick from there on out.  Here I stand before a route.  We will establish anchors, rappel down and begin our respective climbs, belaying each other from the bottom or top, depending upon the situation. 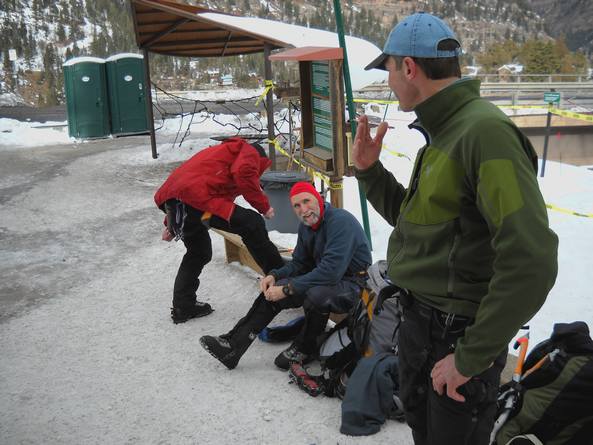 (Here is Neil and Lee)  I had not seen Neil since our Denali climb and it was a great reunion.  Lee (right) is another Alaska guy, tough as nails and a great climber.  I learned a great deal from them both. 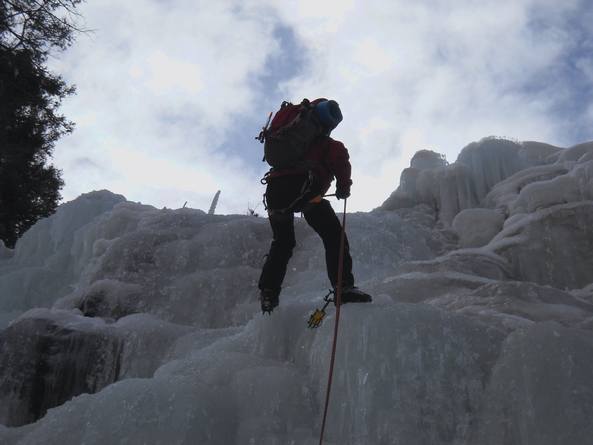 After establishing your anchor, you rappel about 90 feet down to the river floor.  It is preferred that you do this WITH your crampons but Dr. Dan wins the Alpinist of the Day award by trying to increase the severity of his descent by dangling "sans spike" 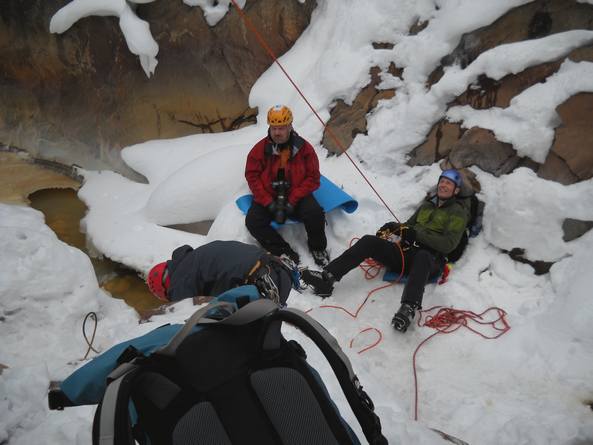 It is nice to get comfortable in your belay position because if I am on the other end of the rope, you may be there for a while.  Although I like for Lee to be comfortable, I had to draw the line when he began mixing a drink.  Dan sits with his camera which is not an extension of his manhood. 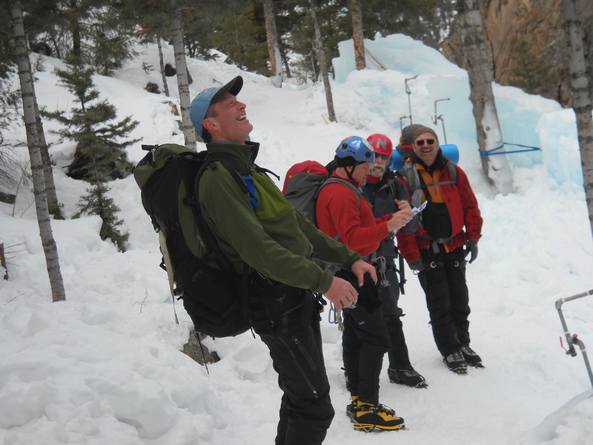 You wouldn't think that four mountain climbers would need a map,  the idea is ludicrous, right Lee?  Can you guys guess which one is Neil?  He is not a special needs climber.  As a matter of fact he may need a special dose of therapy after dealing with us for the week. 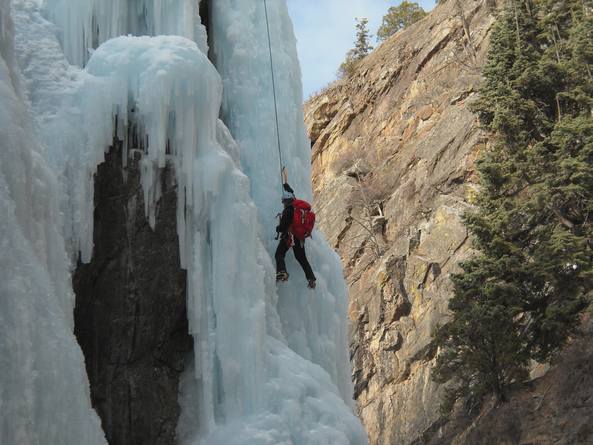 This is a chick with a pick, and she knows how to use it.  (No, it is not John Davis)

This is JD.  He is a good climber, all around.  Must be his jazz background that gives him a sense of timing on the wall.  He is a trumpeter and no, he doesn't blow it here. 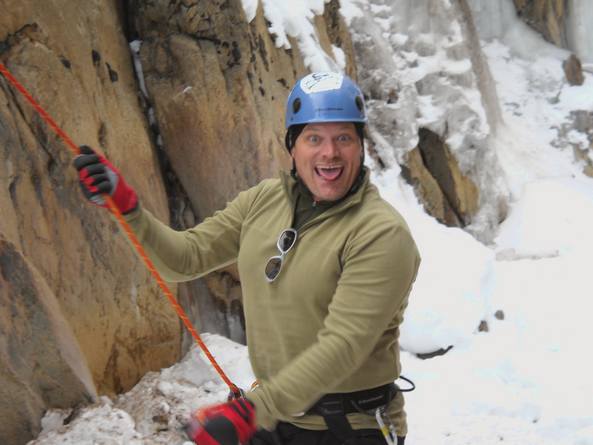 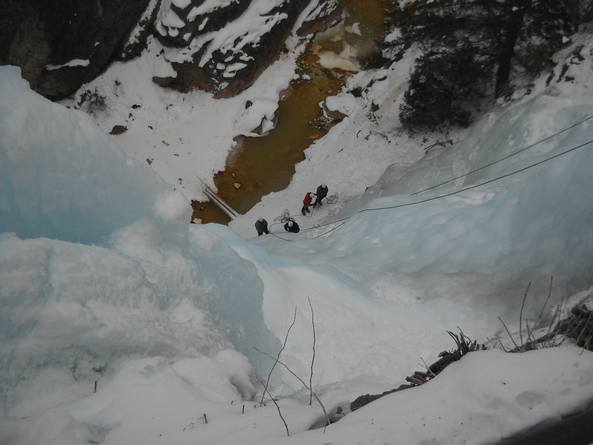 When I topped out on this WI3, it looked farther down than I remembered. 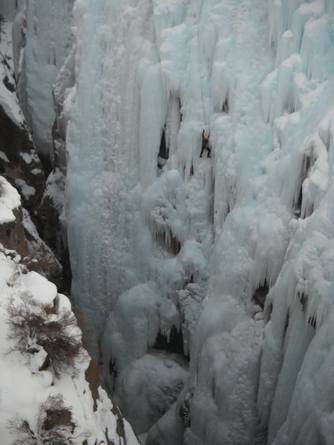 Can you see the climber in the middle.  He is the Ant scaling this big wall.  This route is very difficult and requires a 70 meter rope as you can see.  That would take me about 5 hours, providing I didn't collapse, which is likely.  None of our Team made that particular ascent.  Not this year, anyway. 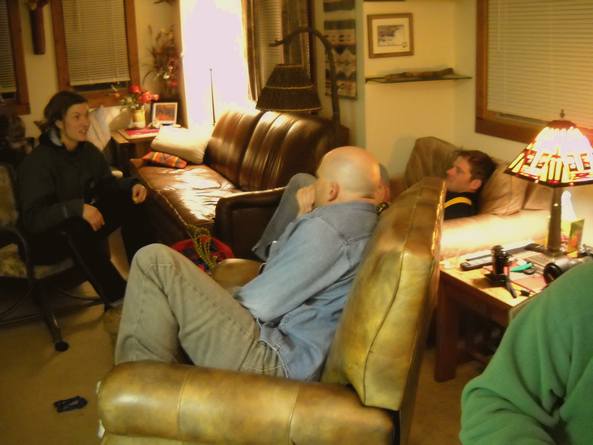 Back at the condo,  we were joined by Denise, (Lee's daughter) and her boyfriend Matt, an avalanche forecaster from Utah.  Denise is a former Olympic biathlete and is quite adept at most physical activities, cleaning up lead routes  at the park.  JD listens intently at the nightly debriefing. 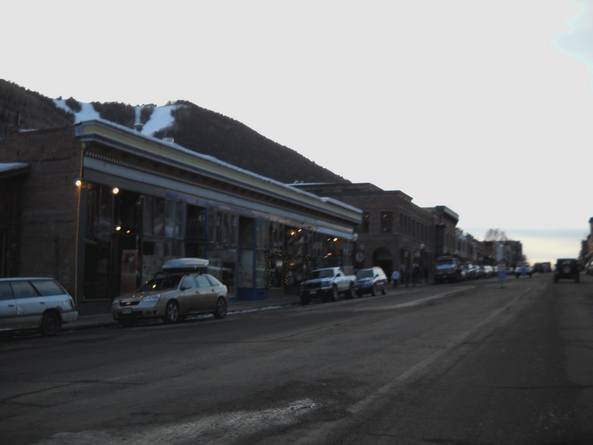 We took a break and headed over to Telluride for some skiing on Friday.  Dan and I cruise the streets looking for a parking venue.  I will have to admit that after two days of skiing there, they could use some snow.  In addition, I am not very impressed with Telluride whatsoever.  It feels like a place that got too cool for its britches and priced itself right out of the market.  The skiing is more family oriented with shorter runs and the resort doesn't seem very well planned.  They have difficulty utilizing the lay of the mountain and deciding what kind of mountain town they wish to evolve from.  Is it the Tom Cruise homestead or bluegrass festival place or a ski town.  I think after my second day over there, little changed of my perception of that ville.  It is expensive, difficult to navigate and pretentious.  Not to mention, it is far away in the middle of nowhere.  Some guy on the lift told me I would never return to Breckenridge or Keystone after skiing here.  He couldn't have been more wrong. 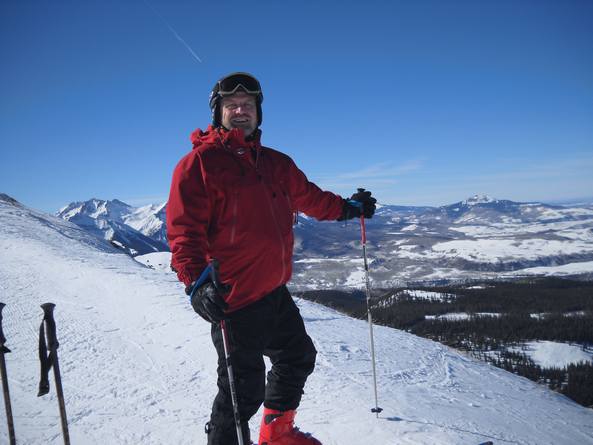 Dan stands on the summit of Telluride at 12555.  He is a fairly decent skier for an old man with hemophilia taking chemotherapy. 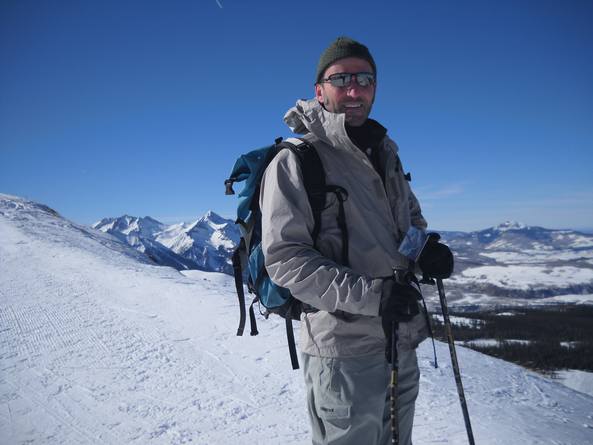 Yours truly with the San Juans in the background. 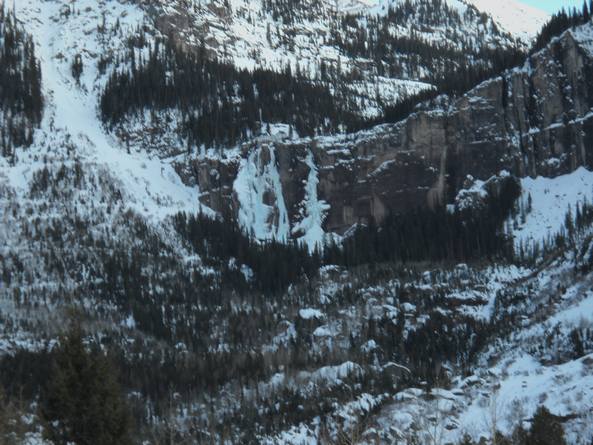 This is Bridal Veil Falls outside of Telluride.  It's a climber's destination but a little off our radar for this trip. 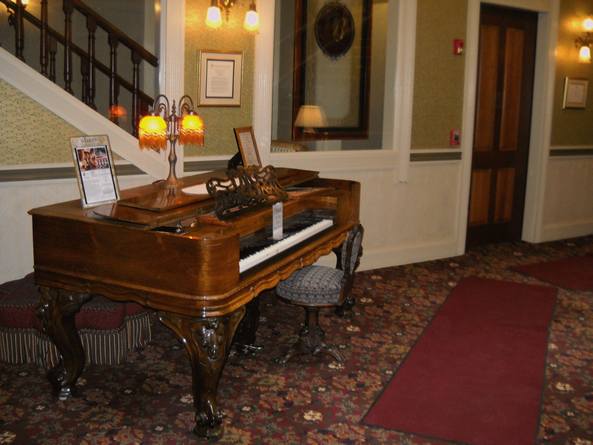 This hotel in downtown Ouray is quite old.  I appreciate the piano but can't convince JD or Dan to favor us with a tune. 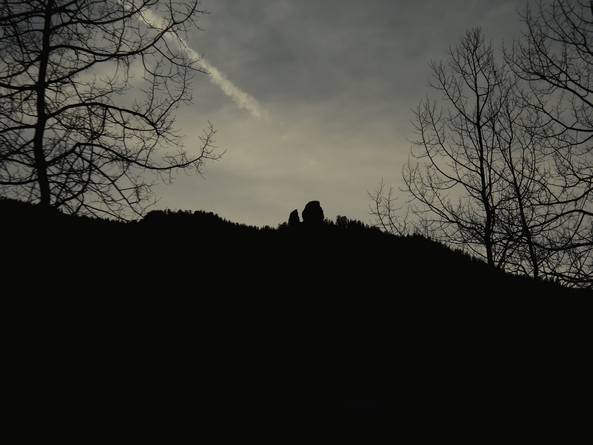 As the sun sets I present you with more pictures of Mount Sneffles. 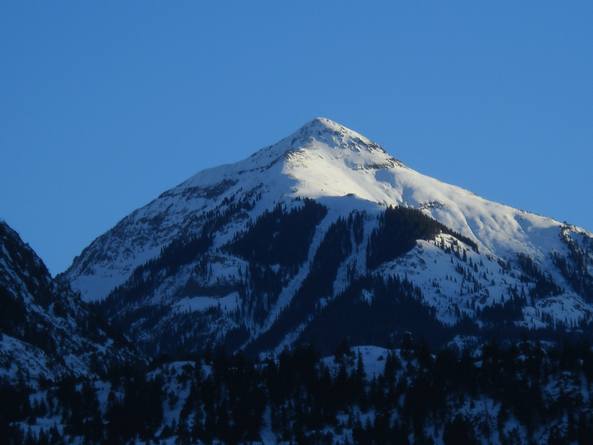 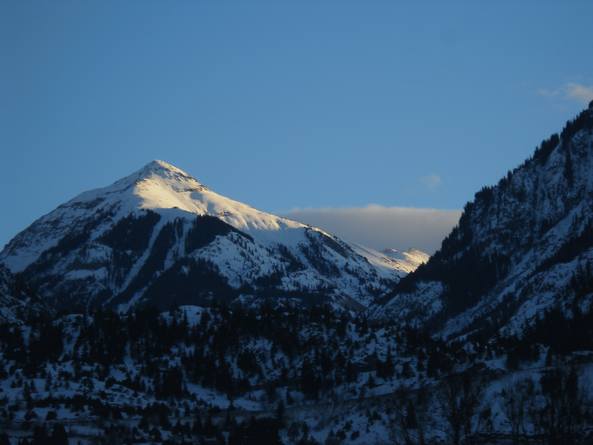 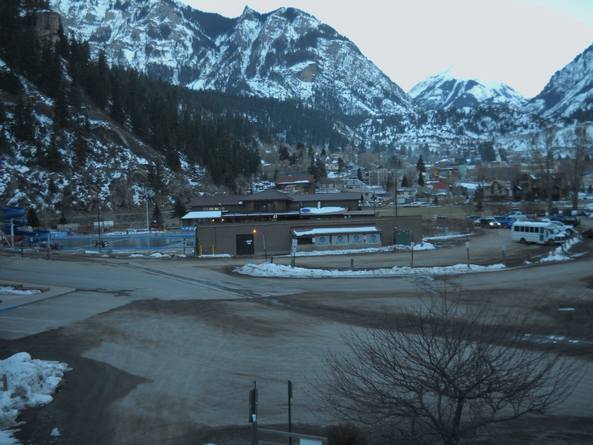 This is the Hot Springs in Ouray from our condo porch.  We spent many evenings unwinding in the warm, warmer and warmest pools.  The water contains Lithium which balances our mood.  Can you spot Mt. Sneffles in the shot?

Overall, I was tremendously impressed with Ouray and Southwest Colorado.  It is a vast expanse of open high desert with grand peaks of great altitude.  The ice climbing conditions were ideal, the skiing not so much.  Ouray is a true Western town while Telluride is a true Hollywood version of one.  It was good to reunite with the Denali boys and we schemed and dreamed of future climbs.  Lee and Neil left for a hut to hut ski trip for a couple of days and we eventually all departed for our respective states.  The ice is a great workout and you can make a cheap vacation out of this experience.