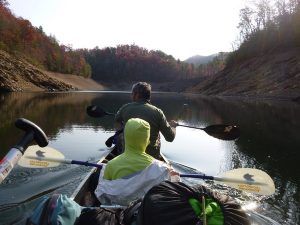 Laurel, Wayne and I steer the “Steenhatchie” through low waters of Eagle Creek on Sunday. But wait? Who is Wayne? And how did Laurel get here and why did I lose a passenger? Questions Questions. 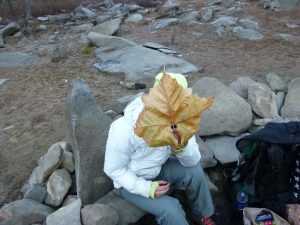 It all began on Wednesday. Laurel departed from Knoxtown on her quest to knock off Lakeshore Trail, solo. She had concerns about being alone on the trail for 30 plus miles but I assured her that the majority of guys I used to hike with had never spent a single night solo in the backcountry. So she put on her man drawers and embarked from the road to nowhere into nowhere. Because she is not a puss. 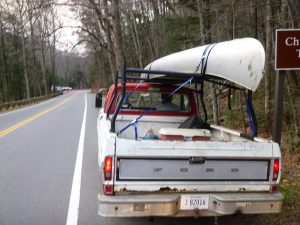 For the past year I have spent considerable time preparing my old truck for this very sojourn. New carb, brakes, alternator, fuel pump, tires, radiator, heater core and voltage regulator. At least that is what I can remember. Then I installed the canoe rack which had to be drilled into the rails. Following a perfect Thanksgiving with my family, Myers and I departed from Knoxville early into the smoke of Walland passing the detritus of a burned hillside. Soon we took on the dragon of 129 and made 10 miles per gallon as we steamed towards Fontana.

The SS Steenhatchie plowed through the placid lake of Fontana on a crisp post holiday morning with perfect temperatures on the traditional Southernhighlander Eagle Creek weekend. I first discovered good ole Eagle Creek in the 90s and started bringing folks over there annually for a post turkey extravaganza. I was hiking the Lakeshore myself along with a friend when we stopped here for a break. I could feel the good energy of this spot and vowed to return. Many are the nights we spent around what came to be known as Sithenge. 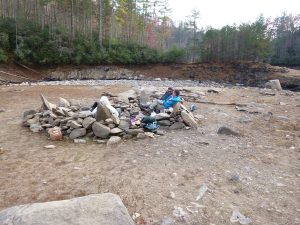 Dozens of groups have joined me there over the years.  Those are well documented epics readily found in the archives section of southernhighlanders main site.  Improvements at Sithenge were compliments of Highlander fold.  There was one year when I orchestrated a great rock movement.  I knew it would suit me and others for many decades to come. 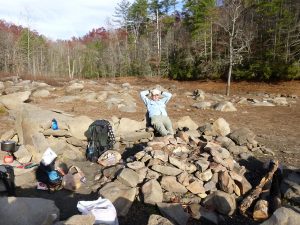 There is something about the inherent relaxing ambience of late Autumn sunbathing on the rock seats so perfectly positioned. It was during one of those moments, after we stowed the Steenhatchie that we were met by Mtn Laurel who timed her arrival in accordance with our docking. We were the first humans to cross her path in three days and she was ready for some company. I was happy to oblige.

And she didn’t stink. We set up a nice camp and began not to gather firewood. Because there is a fire ban. And we observed the ban, to the letter. But it was contrary to our nature. And you know what? Nothing happened other than a couple of good nights sleep.
Anyway, we are lounging about Sithenge when guess who comes walking in out of the blue? 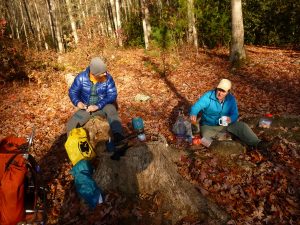 Yep, it’s Randy Redwood from Hangover last month and the year before. What a surprise. He had also been out for about five days up Hazel and about. The backcountry is a small place and getting smaller. He and Laurel had apparently passed each other along Lakeshore unbeknownst to either of them. 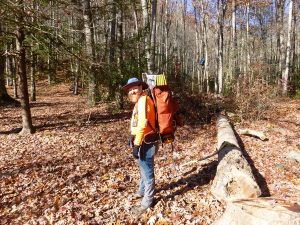 Randy was going to head up to Lost cove but decided to hang out with us for the evening and we thoroughly enjoyed his company. We populated Sithenge under a star filled canopy of grandeur along the shore of Eagle Creek and I channeled Hemingway for a night of fireless bliss. I’ve spent many a big hiking night along the AT sans pyro displays and even though the temps dropped, we found plenty of entertainment in the crystal clear starscape and stimulating conversations. It was magnificent. Especially as Myers is quite the Astronomer who could describe the phenomena passing above in great detail. 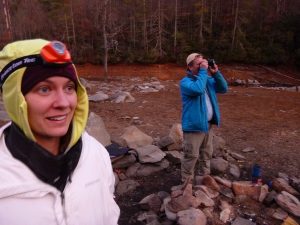 Now to the bloody hatchet man. Many fans of this page are familiar with the oft related tale of the bloody knife man. I’m surprised how many folks are familiar with the Southernhighlander antics until I get into the backcountry and have people relate these events from this site. Randy is one who has followed our outings and now he is a part of this story. Anyway, I had been teasing Laurel about the bloody knife man story from campsite 18 many years ago. It was in her head as she passed a campsite. And what does she come upon halfway through her journey? 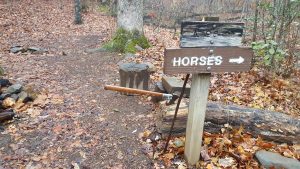 It wasn’t enough that she had encountered many of these critters already. 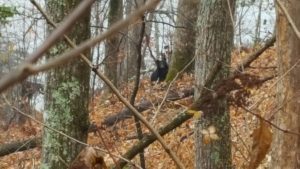 And we both saw a fair amount of hogs. 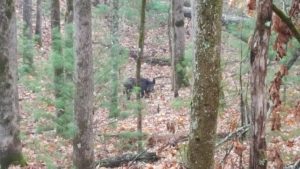 Laurel reckoned she spied near 20. I saw three. So she got a good solo dose of the bloody hatchet man in her campsite. And she powered right through. Intrepid backpacker she is. 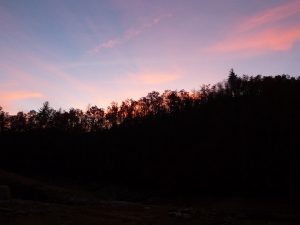 On Saturday we all headed up towards Shuckstack tower. It was a 7 mile roundtrip during which we would say goodbye to Randy Redwood who would finish up down the AT and head back to Nashville. Ironically, I met Randy’s former roomate, Suzette, at the Shuckstack firetower three or four years earlier while enjoying the view on another Thanksgiving outing. Our backcountry gets smaller and smaller. 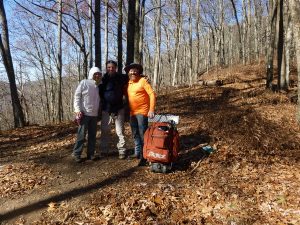 Climbing Lost cove is an exercize in cardiovascular fitness. It is a couple thousand feet in three miles to the summit, which was clear as a bell and completely devoid of smoke. 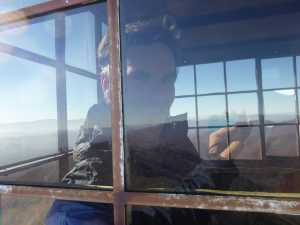 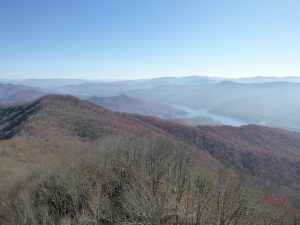 It wouldn’t be that way the next day when Myers re hiked the section to pick up some of his remaining Smokies miles. Myers is near completion of ink. And Laurel is approaching her 350th Smokies mile. She accrued about 37 new ones this past weekend. 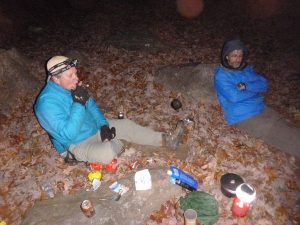 We were joined by Wayne Willis from Gainesville Fla. It was his first Smokies trip. We sat around our pseudo flame in a much chillier evening on Saturday. Temps had now reached the twenties but we are adaptive creatures who thrive on these sorts of challenge. After all, we drove a truck through the dragon, paddled a canoe older than the truck and toted gear more than a quarter mile into a camp. This is the stuff of Highlander lore, the gristle upon which character is milled. No captains are made on calm seas and all earned their wilderness badges in these days. Only the intrepid remain. The fire ban all but ran everyone away from the Smokies but fire will be eternal for some and we were in no hurry to meet such fate on this weekend of perfection. 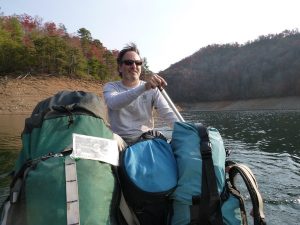 Wayne had injured his foot in his miles out toward Hazel so we put him in the canoe and he helped us paddle back across a choppy channel. Myers went back up and over the hump and we were able to intercept him at the dam. Everyone was happy and we made a new friend.
On the return, we picked up Laurel’s car at the Lakeshore terminus unmolested. The 1971 Ford Ranger truck fired back up to haul Myers and I back around through the park in time to witness a now resurgent Chimneys fire that is presently causing the evacuation of Gatlinburg. It is as if the Smokies are retaking the land that has surrounded it and I am sorry for any loss of property. One can’t help but note the metaphorical implications of nature versus commerce here.
I hope no one is hurt. My personal feelings about fire in the forest is that fire is a natural cleanser. There are certain pine cones that don’t release seeds without the heat of a fire. I can remember no wildfires in the Smokies in my lifetime.
Myers caught this photo Sunday afternoon. 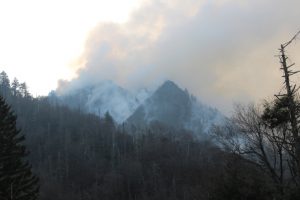