Hemingway coined this phrase in the 1920s as he, along with other malcontents now regarded as the “lost generation” found their voices in the heart of the “city of lights”.

I took this photograph riding the RER train across the Seine.  It is a dirty window on a cloudy day that gives this view of the “tour Eiffel” it’s dour appearance.  I believe the impressionists would approve. 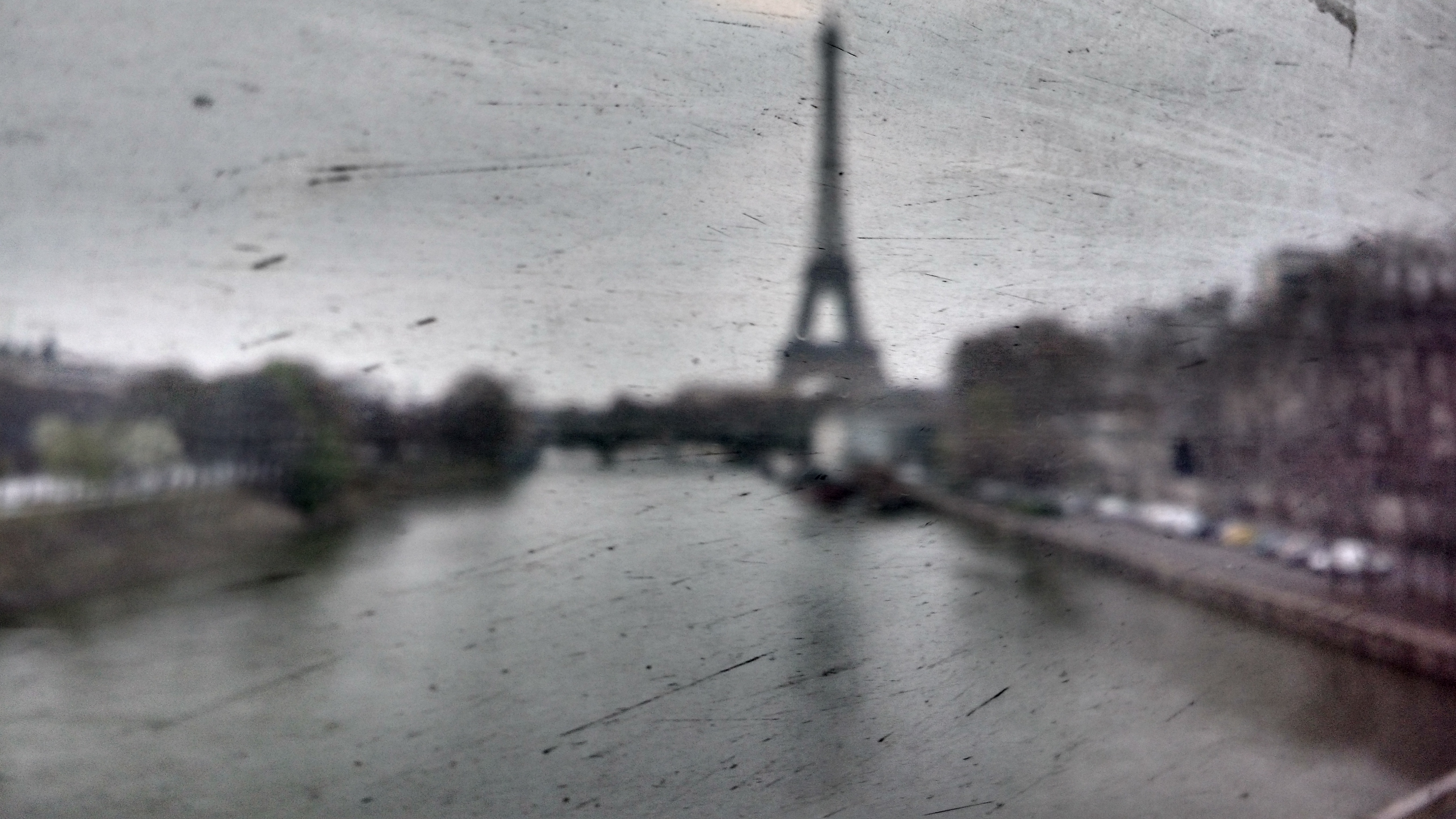 I’ve lost count of my visits to this place but each return just solidifies my love for what Paris represents.  I get so tired of Americans who have never left the country denigrating the French because Fox news told them some BS.  Yes, the French didn’t agree with the Iraq war and refused to follow Bush down that quaqmire.  If anything, that gives them cred it my book. But even it todays toxic political climate at home, some of that misanthropy still exists.  If the only place you get your information is Fox News, then you have more problems than can be addressed in a single therapy session.  Every day, more and more, it is crystal clear that our President has colluded with an enemy of the US to subvert the political process and all Fox news can say is that the whole thing is just fabricated.

When the Iraq war hype was being fed to us via real “Fake News” I was lambasted for questioning Bush and the neocons.  How dare you question our president in a time of war.  Well, funny what a few years will bring, huh?  It is now universally accepted that Bush and his whole team lied and now there is mounting evidence that they were more than a little involved in the events of 911 that got their oil hungry pals into the Middle East.

I am saying all this for one reason and some of you may not want to hear it, but I am going on record.  Trump is an ignorant moron just like Bush.  And ignorant morons are the most dangerous sort.  Both Trump and Bush are owned by the millionaires who obviously pull their strings.  So be very cognizant that Trump will likely follow the Bush playbook and start a false flag act of terrorism to deflect from his Russia scandal.

What does this mean?  It means that Russia or some similar oligarghy will start something in a place like Syria, or pull a 911 type event that Bush so masterfully allowed to consolidate American support.  It worked like a charm for the neocons on 911 and I am saying this to those who have sons and daughters that go die for these criminals.  When the false flag event occurs, you better start questioning, reading other news sources outside of Fox and getting your affairs in order.  Americans forget to wipe when they perceive some terrorist threat.  We willingly abandoned all our freedoms for the Patriot Act and now, last week, the House signed a bill giving away all your internet privacy to the highest bidder.

I will end this lecture but take note, we are more vulnerable now in the US than at any point in my lifetime because we didn’t use our thinkers and fell for fascism.  Americans falsely believed that a millionaire gave a flying crap about them.  I can assure you he doesn’t care about anyone but himself and his other millionaire buddies.  I know this because I deal with liars on a daily basis.

Now back to Paris, 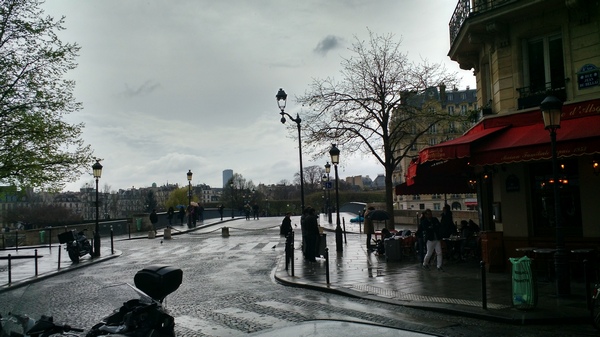 Our first day, after settling into our apartment, we walked the streets from the Bastille to the Eiffel Tower.  It was five miles.  Laurel and I cruised along the Seine, passing familiar sights such as the Louvre and Notre Dame. 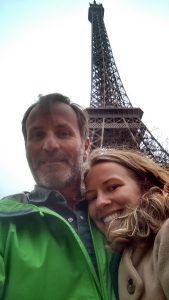 Then she made me climb that sucker for the millionth time. 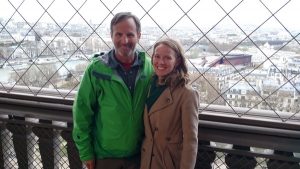 Now that we had checked the box on tourist attractions, it was time to check off some other Paris sights.  We secured reservations at some fancy dining establishements, one was in St. Germain de Pres and the fare did not disappoint.   Our time on the Metro was extensive and Laurel can navigate that transit like a pro.  I really enjoy the Paris metro, it is nothing more than an underground train and is very efficient.   We rented an Airbnb and stayed in a traditional Parisian apartment in the 12 arrondisment in the old part of town.  The metro was nearby as well as Gare Lyon, the train station.  Benmoine was our host and her hospitality was appreciated.  It was an old building with our flat being on etage 5, en Francais.  My main objectives on this excursion were to make it to Versailles and go to Harry’s bar. 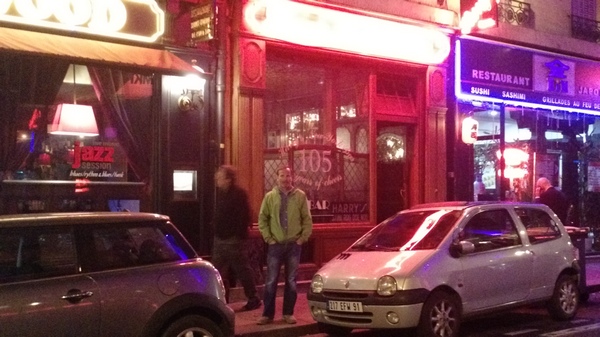 Harry’s New York bar was and remains a Paris institution from the time of Hemingway who hung out there.  The bar invented the Bloody Mary drink, apparently.  It is still quite popular with tourists.  We metro rode to the Opera House in a rainy evening to enjoy that part of town.  The metro pops us right up here.  Are you starting to get a feel for the excitement of the city of lights?

Our time in Paris was three nights on the back end and the weather had been, well, French.  Paris is always sort of windy and rainy so I delayed our pilgrimmage to Versailles until Saturday, which was a mistake.  Although that was the perfect weather day, about 10 thousand others had the same idea.  We boarded the RER train to Versailles and stood in a queu 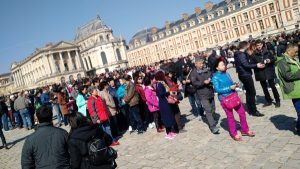 of no less than 4 thousand people.

It was a mistake, because our line was almost three hours long.  Versailles had eluded me for approximately 12 trips to Paris.  I can now allow it to elude me for 12 more.

This is just a thumbnail of our time in Paris.  The nightmare returning and getting there is a story for another time.  American Airlines has to be the most irresponsible carrier in the industry.  I got what I paid for.  A $510 ticket from Knox to Paris via Philly turned into an epic travel headache.  But it still justified what turns out to be a 500$ minimum savings.  This is how we felt after getting up at 4 am to get to the airport.  Understand that while we were there, a terrorist opened fire at Orly airport and another similar act occurred in London.  We had to return via both. 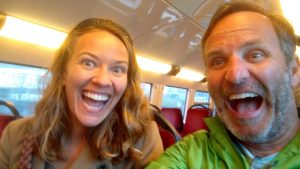 It’s enough to make you scream!

But overall a fantastic French experience, as usual.