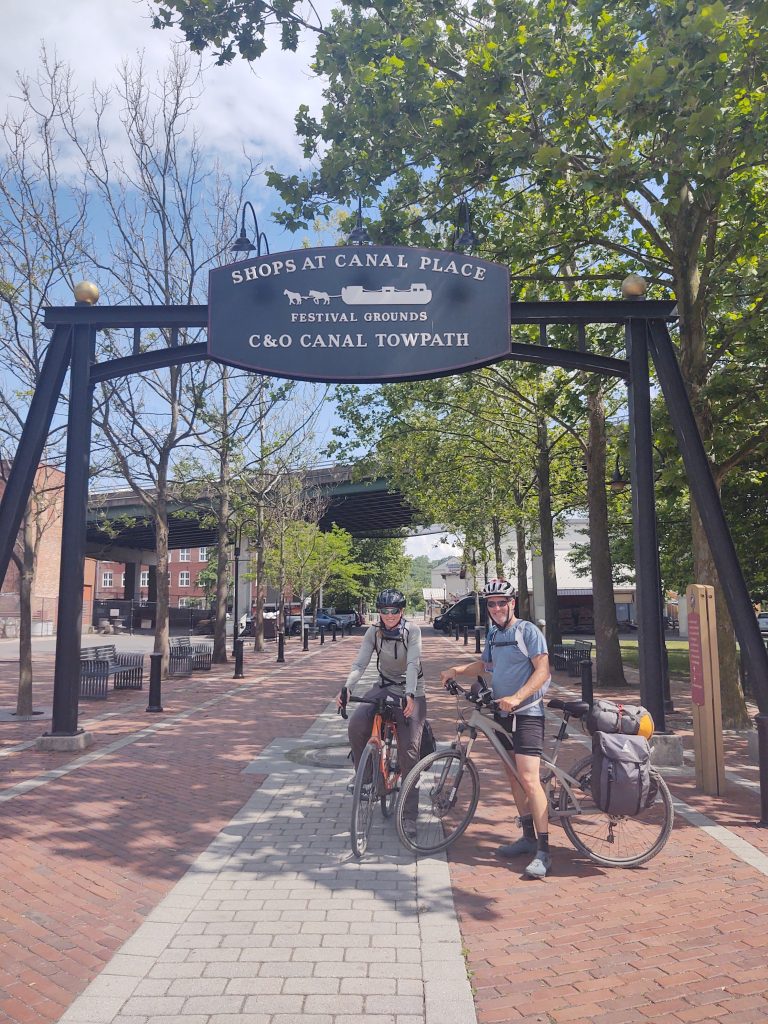 Yes, that’s me with the sexy legs at the end of the C&O Towpath again. You may be wondering why I went back. Well, Kelsie was itching to do her first bikepacking journey and I wanted to spend a little more time on this trail. So, off we headed to our nation’s capital and departed from Georgetown, heading north this time.  Right off the bat we came across a deer, so close to the city. It was a good omen, we would encounter many. 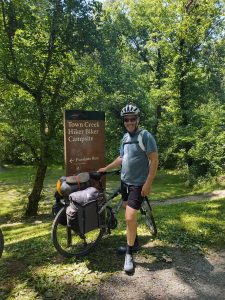 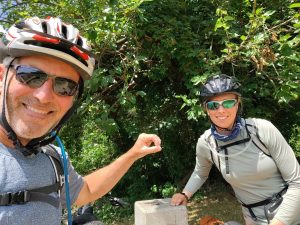 Mile Zero, We found it with no problem. 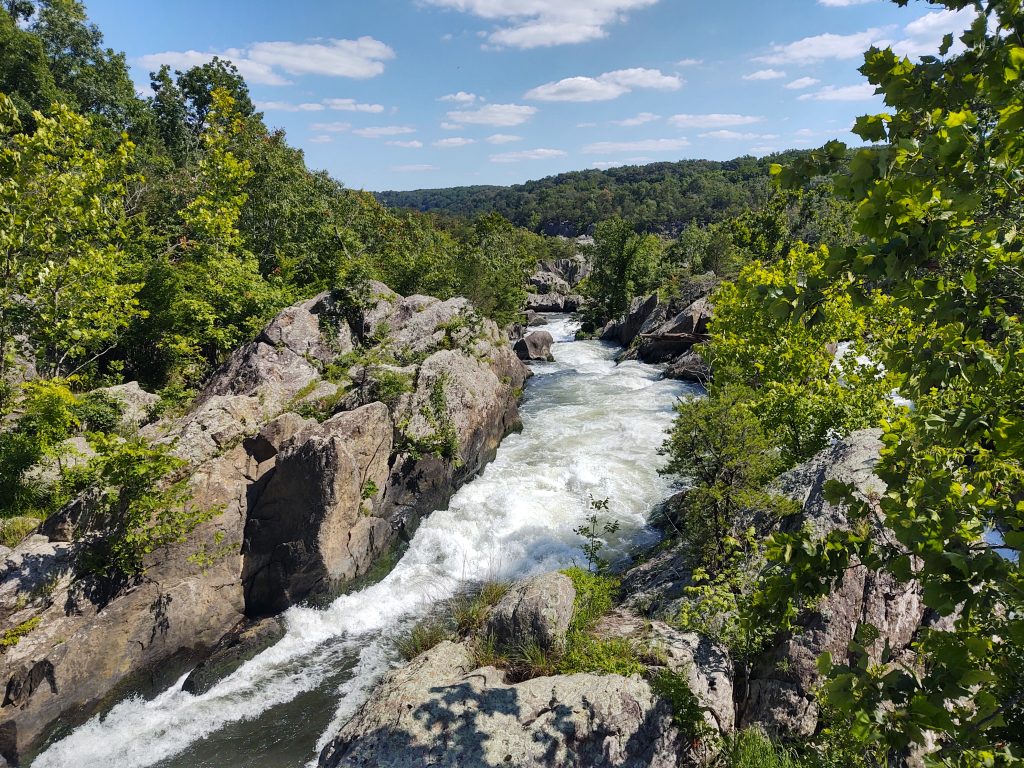 Sights like this were missed  first time around. Really spectacular set of waterfalls here. 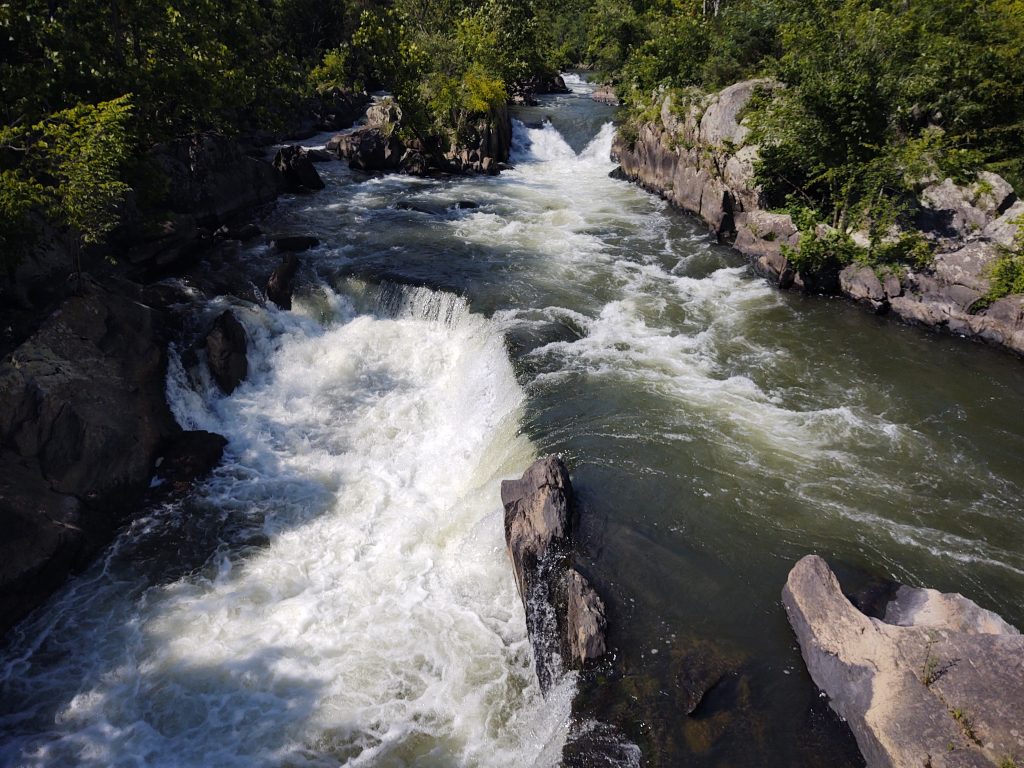 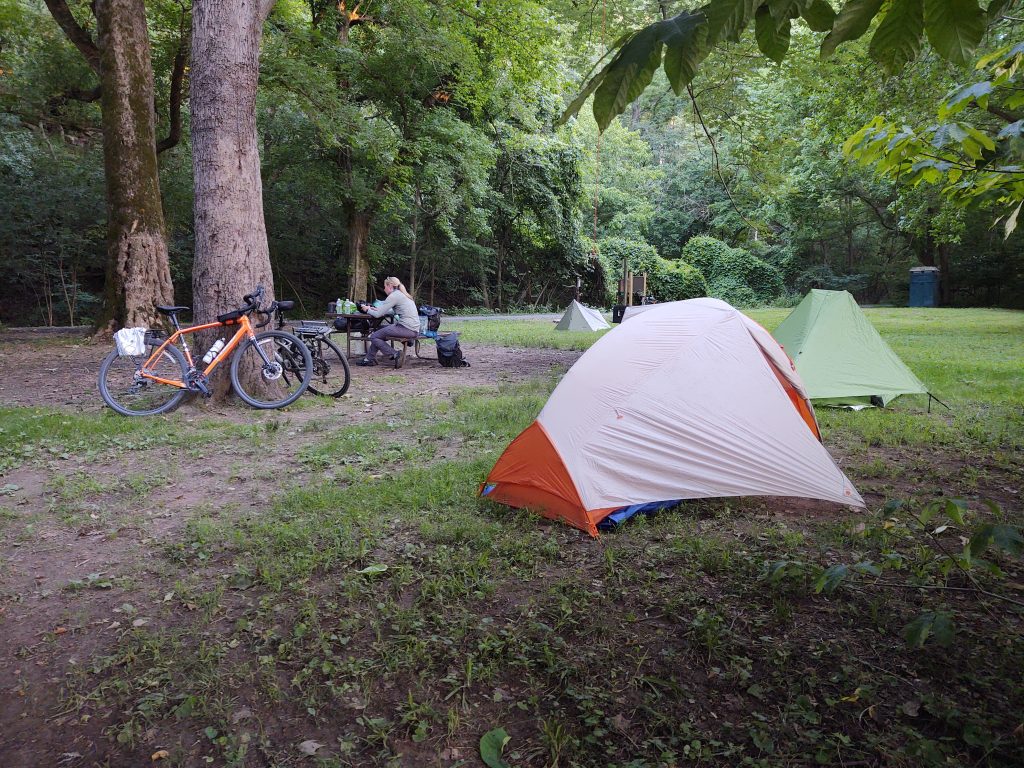 Our goal was to do about 50 miles per day. Our first night of camping was peaceful and we were joined by two fellows  finishing their journey. They had an interesting story about a bear encounter along the GAP portion. Apparently one of them awoke during the night to see a bear dragging their bike off as it had food in the pannier.  We took necessary backcountry precautions and hung food nightly. 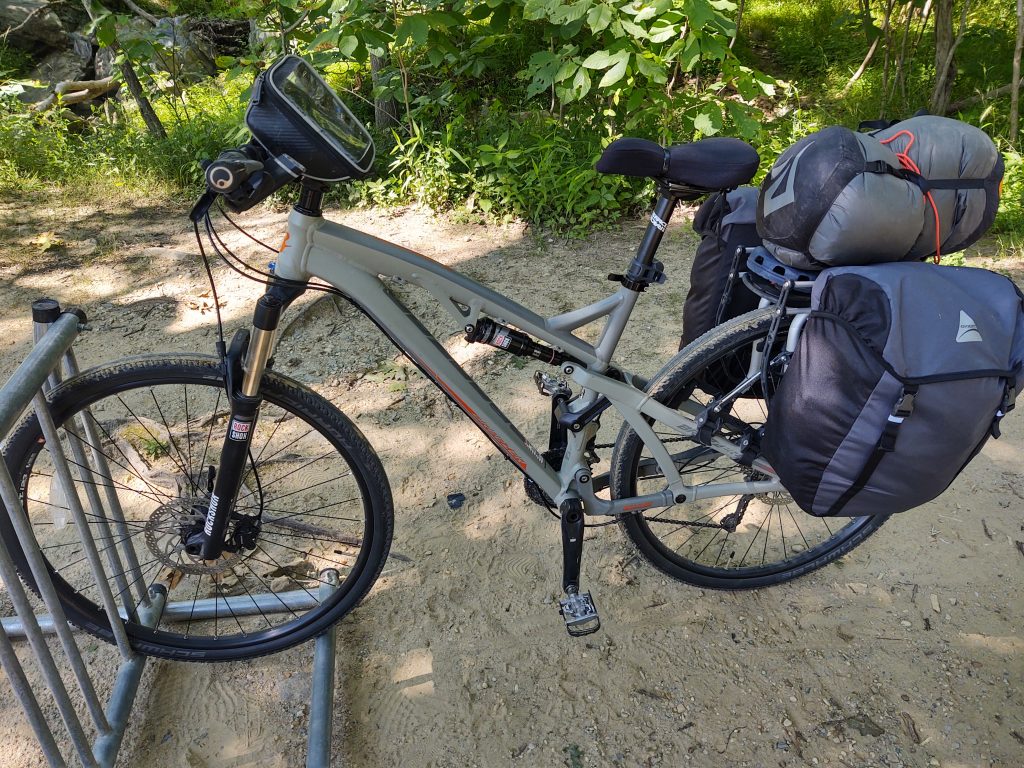 This is my rig. It is a full suspension mountain bike with adapted panniers. In order to complete 187 miles with three nights of camping, it needed to haul 30 pounds of gear. You may notice that I replaced wide mountain tires with skinny Shwalbe Hurricanes. They performed flawlessly on both journeys with zero flats.  Zero. I don’t necessarily recommend a full suspension bike, hardtails are better. It’s less weight and energy required. But I can’t afford a gravel bike presently. It would have to do. The C&O is essentially flat. Weight is not really an issue in those circumstances. 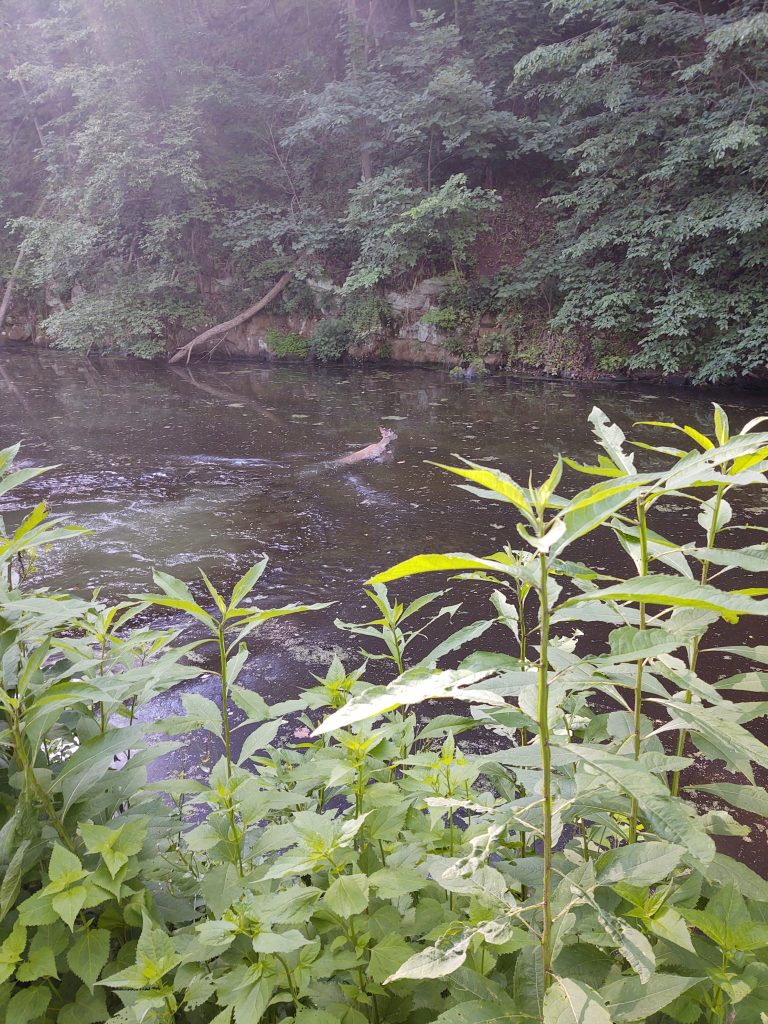 One of our more interesting deer encounters involved this young buck who got between us and a woman walking in our direction. We both stopped but the deer had no escape route. He opted for the canal. With no problems he swam across and climbed the vertical bank. Kelsie lost count at 14 deer, I believe. But the most unusual episode came on our final day. I was behind Kelsie, (aka the Kingston Hauler, since that is what she hold a local legend status on with Strava) and was attempting to pass when a fawn emerges, or should i say, attempts to emerge from the thicket between her and the canal. The deer starts her jump and nearly brushes Kelsie’s arm before thinking better of the attempt. 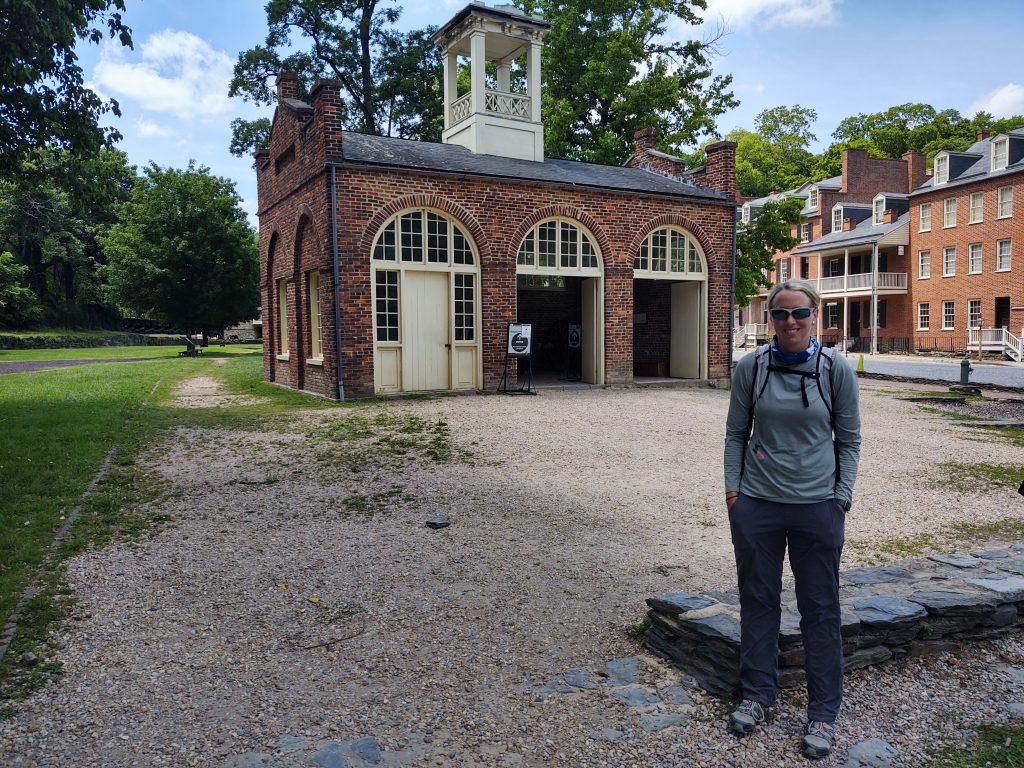 Harper’s Ferry. We locked our bikes and carried all our pannier bags up and over the bridge into W. Va. It was time for lunch. 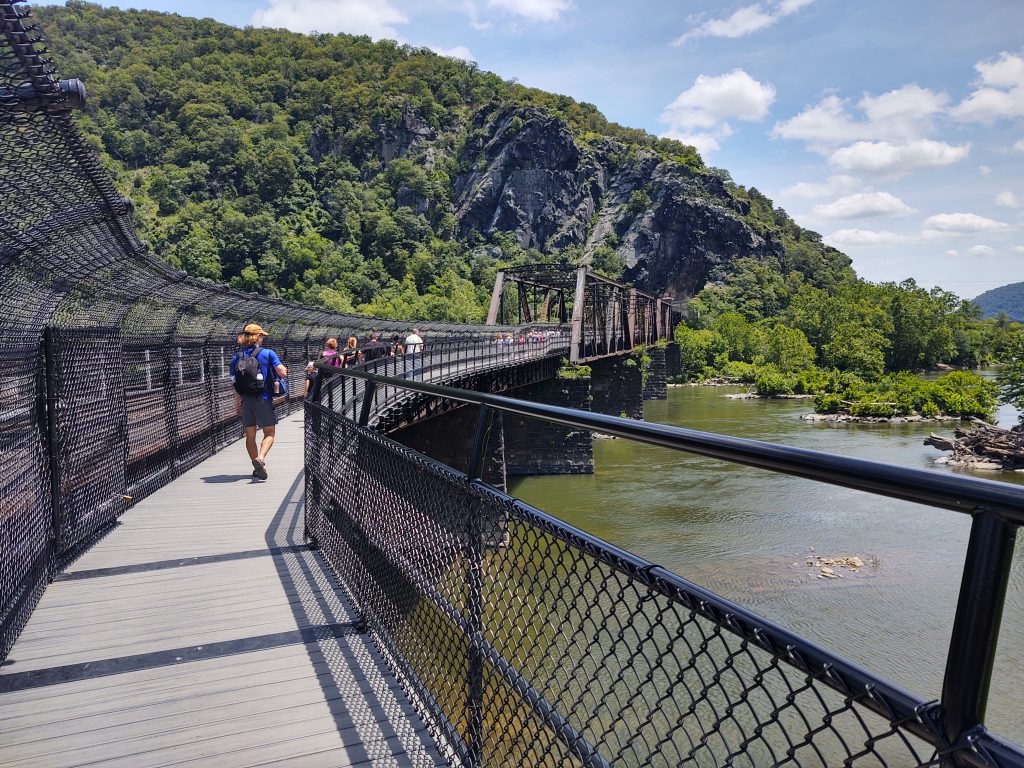 We had miles to go and dared not tarry as Antietam Battlefied awaited. 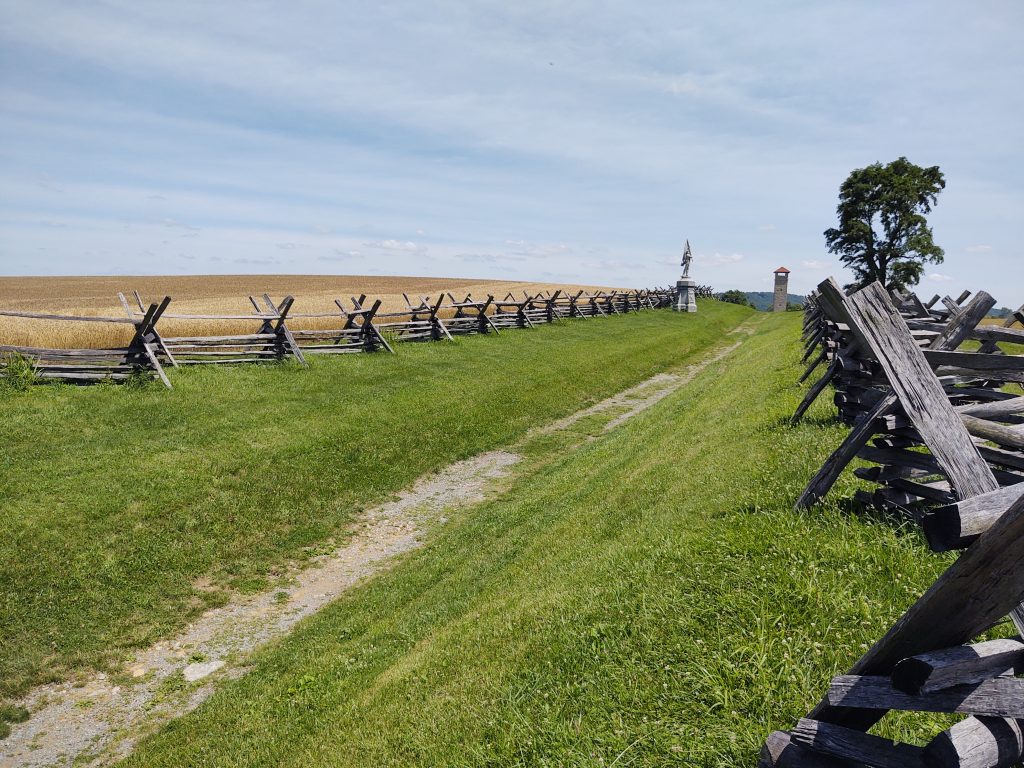 Quite a bit off trail we rode through Sharpsburg and reached the infamous Sunken Road shown here. 5000 soldiers died in a hail of gunfire and constant artillery. Being a bit of a history buff, this Sunken Road and it’s imagery have haunted me through the years. 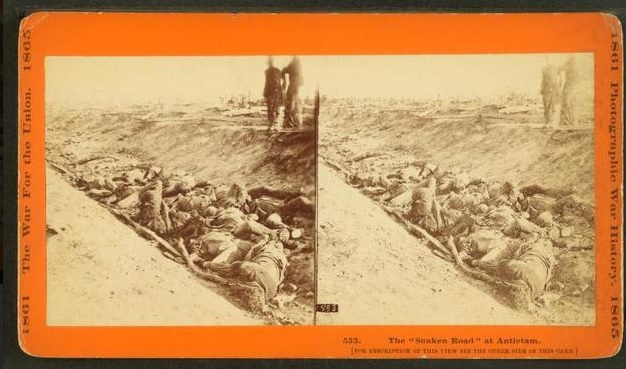 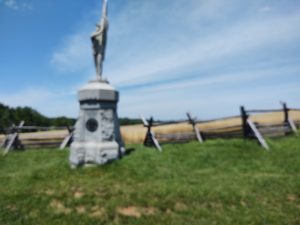 It was a solemn experience and worth the uphill detour. We overnighted at a place called Big Woods camp which found me swimming in the Potomac and the arrival of our new friend, Luther, from Cookeville. 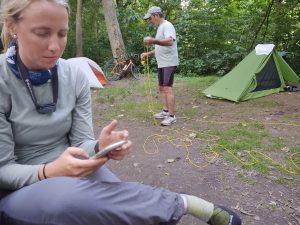 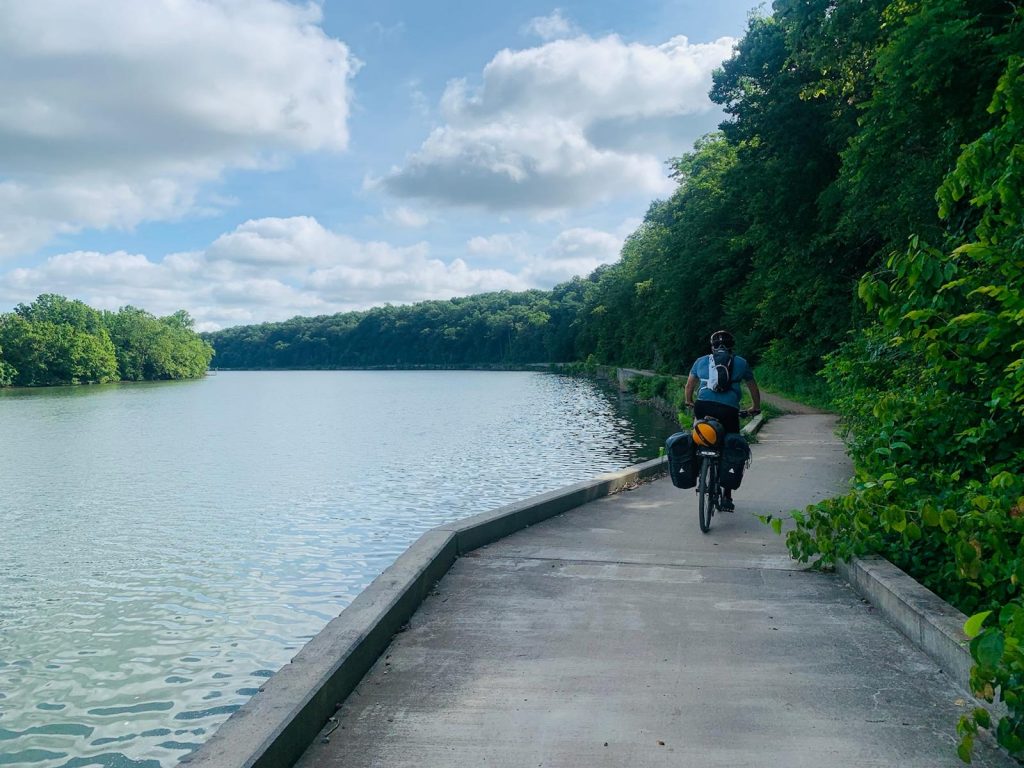 Her favorite part.  (Not looking at my backside) 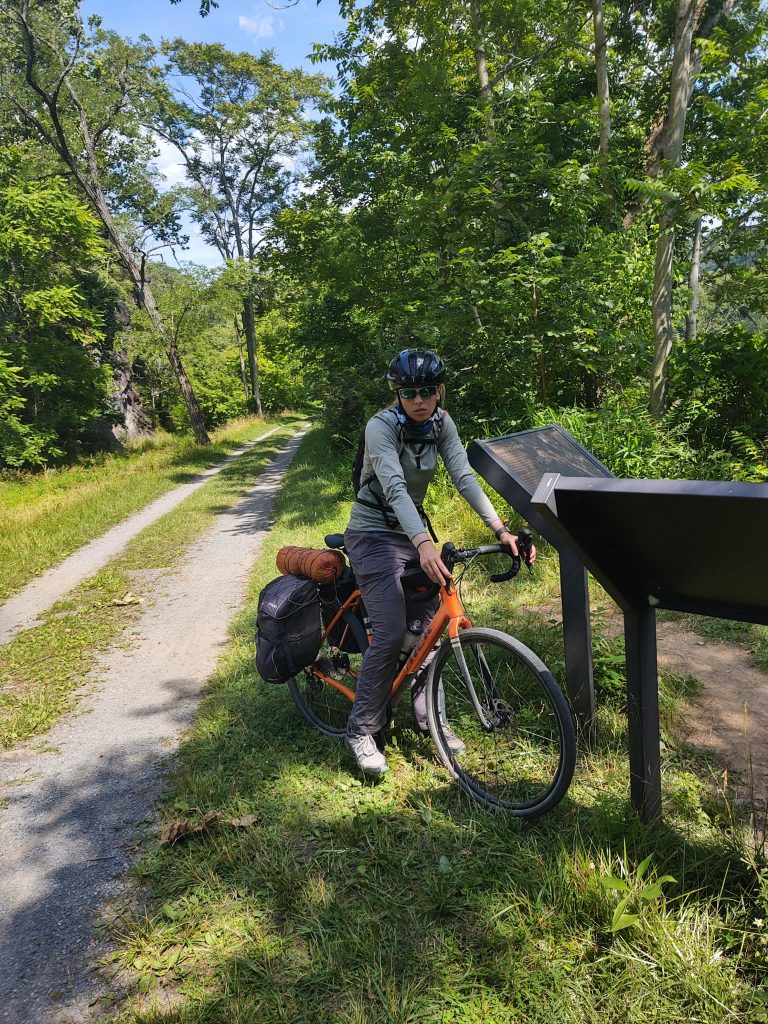 Kelsie is a pro on her first ride. We had the Paw Paw tunnel to negotiate this day. 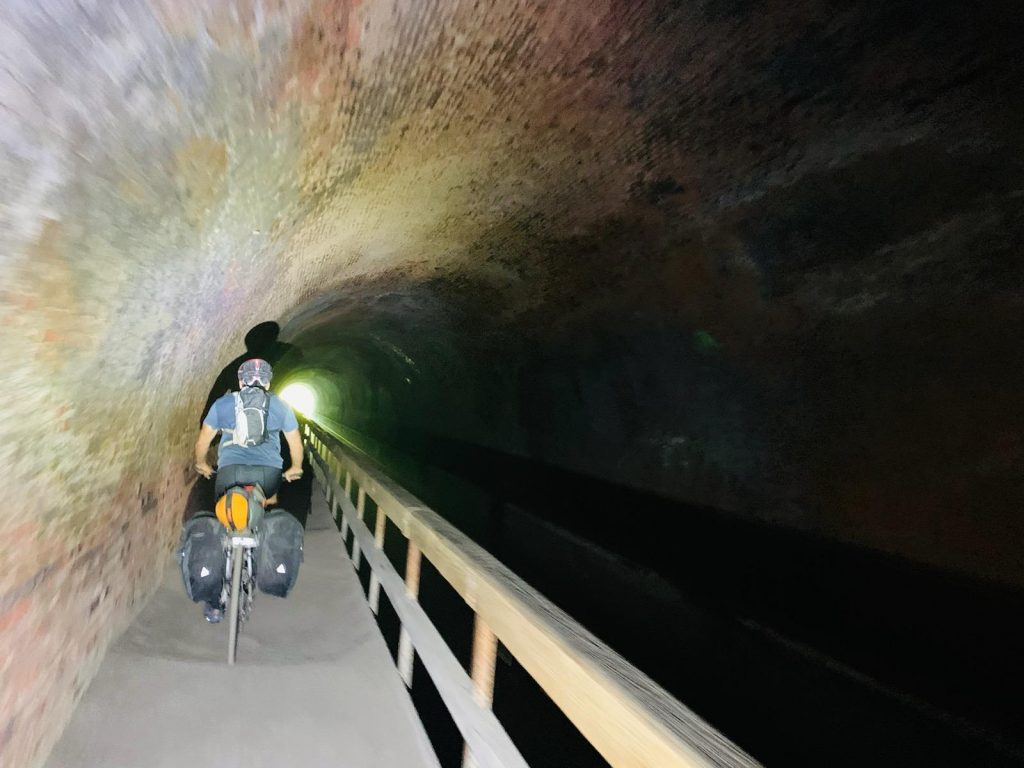 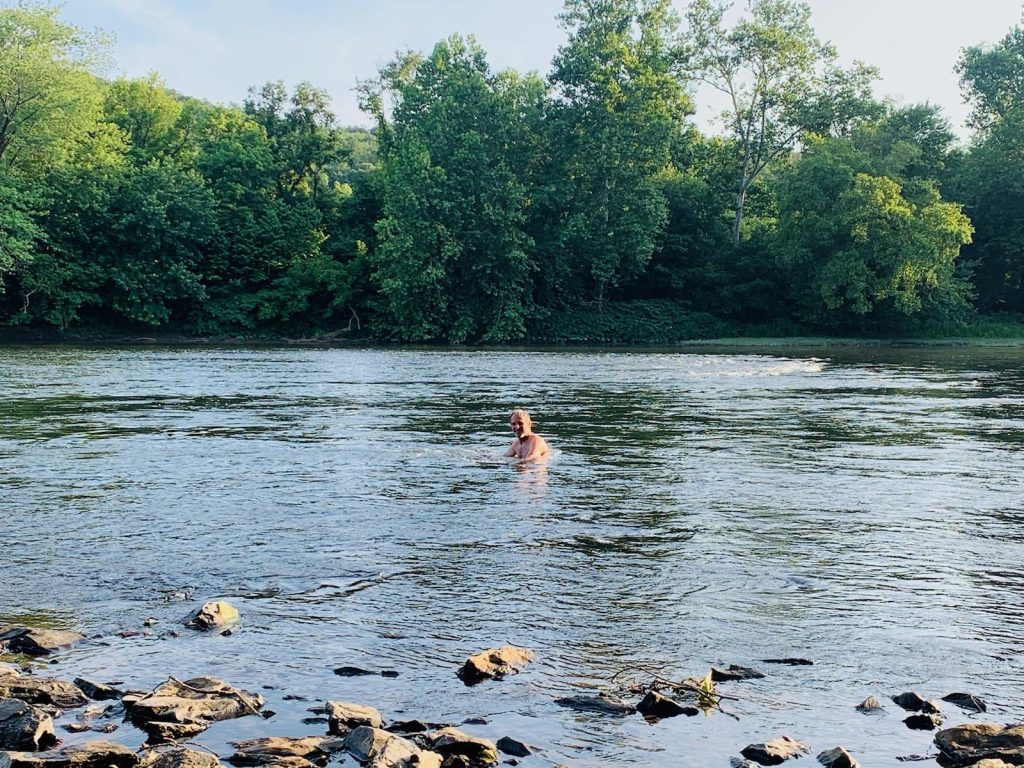 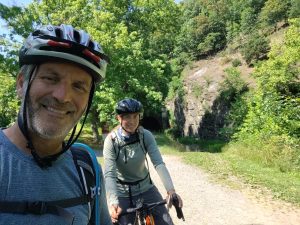 Our last day was planned to be a campout in the final site outside of Cumberland, Maryland. However, whenn we arrrived, the temperature had spiked to 97 degrees. The campsite was utterly unappealing and no access to the river was gained. So we pushed on towards town and shower. The next morning we caught a one and a half hour late Amtrak train back to D.C. Upon arrival in D.C. we had more riding to do back toward Georgetown and mile zero. We passed the nation’s Capital, White House, Lincoln Memorial and Smithsonian. It was now only 94 degrees. Glad we were to finally reach the vehicle and start heading back to TN. We overnighted in Stanton, VA where I celebrated my birthday in this magnificent little town. The C&O was a grand excursion, I highly recommend.

I needed to do a couple of days worth of work in my office before taking off for some climbing at the Red River Gorge in Ky. Everyone knows that I am a big fan of this classic sandstone here. Kelsie and Scotty had never been so I was happy to accompany them, along with Jordan Harris, to my favorite rock in the world. We had Fall weather in the midst of summer and spent the fourth at Muir Valley and PMRP pulling that beautiful sandstone. It is something to behold. 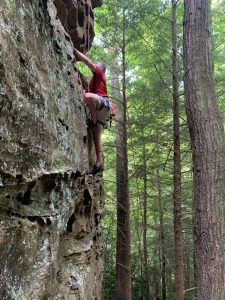 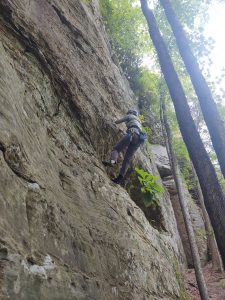 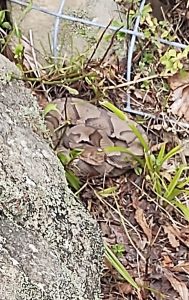 There were more than one of these! 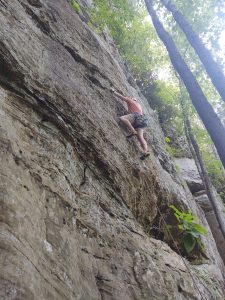 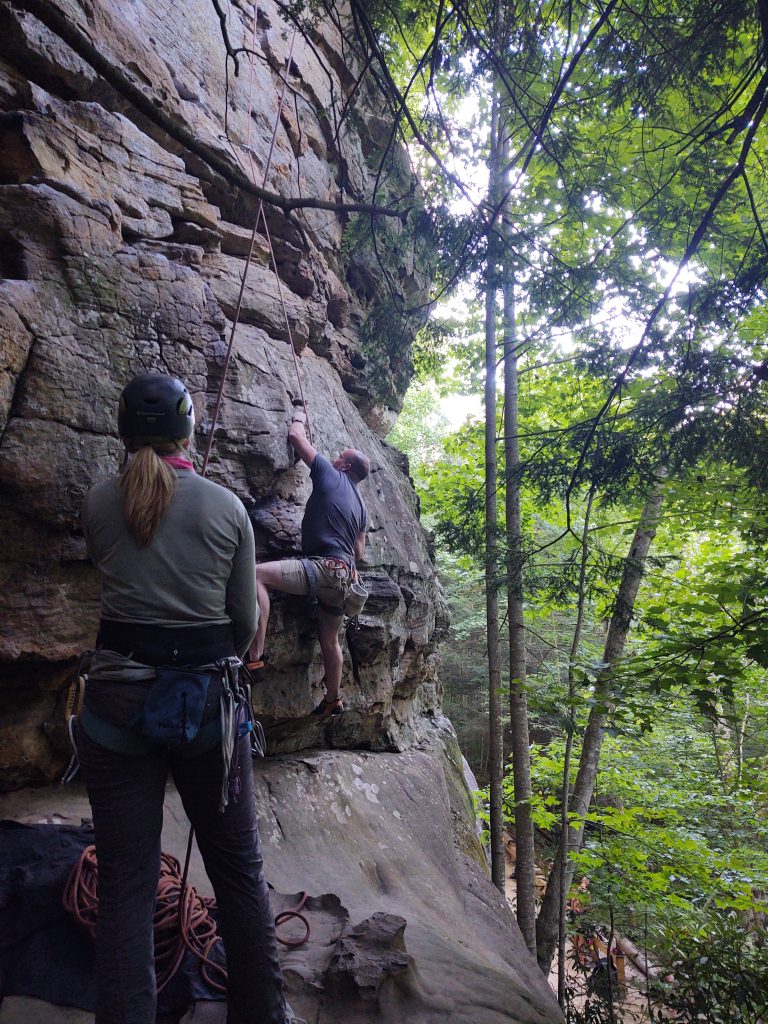 Jordan starts off on a weird little traverse.

Now, let’s start this week off with some tunage.