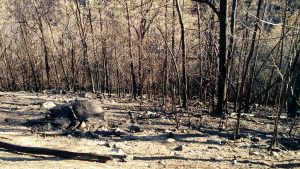 Portions of scarred land along the spur on 12/10. 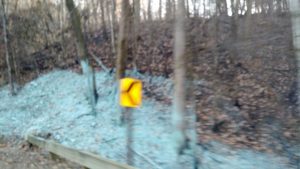 Some sort of fire retardant spray, I imagine.

It’s hard to believe that the relatively small fire we witnessed and videoed after Eagle Creek grew to the tragic event in Gatlinburg. Frank and I were there to witness the damage following an afternoon volunteering to assist victims in a warehouse distribution. We sorted clothing, hauled pallets, assembled boxes and unloaded automobile donations. The outpouring of support was as impressive as the detritus of the fire itself. 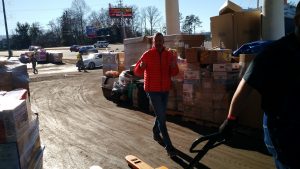 We ran into several old friends from the fee fight and had time to sight-see afterwords. I’m glad we went. Frank drove all the way from Nashville because he is committed to helping Smokies folks. Frank is a proud founding board member of Southern Forest Watch. Much has been made about the juveniles who allegedly started the fire. I think the place was a tinder box ready to blow and 60 mph winds will carry it quite a ways. I know adults who are equally irresponsible with their campfires and have quit camping with certain ones as a result. They did say that the Cosby fire was started by a downed power line. I suppose we should all reserve judgement until the facts are complete.

You may also be aware that our president elect has proposed an interior secretary that makes no bones about her desire to sell off public lands. She thinks that boundary areas near public lands are impoverished and allowing folks to log, mine and exploit those resources are the ticket out of poverty. As critical as I have become of the NPS and DOI in general, I feel as if this is a most dangerous direction and we all know it is a veil to allow the same robber barons who originally raped the Smokies to do so again unfettered with fracking and all sorts of corporate negligence. What is needed is an overhaul of the NPS management. Our President elect has an opportunity to “drain the swamp” of entitlement at the DOI and eliminate fees entirely. Unfortunately, this new potential appointee has proven that she loves user fees for public lands.

If you didn’t see the post below this one, please accept my gift of a free download of my last book. I wish everyone a Merry Christmas.