When the KNS published a story about my friend Alan Arnette’s fall descending Twin Sisters peak several weeks ago (be sure to click the link, it actually shows him getting blown sideways) , it brought back memories not so fond.  Alan took a serious screamer in a 100 mph gust that blew him almost clean off a Colorado spire. For perspective, I have been friends with Alan for several years via the web.  Well before his fame as a tireless Alzheimer’s Champion and summiter of infamous K2.   In fact, prior to my own, well documented K3 debacle in which my climbing partner, Brian Moran suffered similar injury, Alan advised me to use another ground logistics outfit.  He had dealt with Field Touring Alpine in the past and I ignored his advice with predictable results.  Brian’s injury and evacuation consumed but one week of some of the darkest days ever seen in Pakistan’s Karakoram Range.

When the account of Alan’s mishap crossed the Knoxville media, I was already reading an article in Rock and Ice Magazine about another friend from the mountains, Kyle Dempster.  For those of you who may think he sounds familiar, I wrote about him in my last book, Father of Ice Mountains.  Kyle and I happened to be seat mates on a flight from Seattle to Beijing in 2011 as Brian and I headed to the Tien Shan mountains for a summit of Muztagh Ata.  Kyle was already famous by the time we had met and we killed a great deal of time swapping mountain tales in our flight to the Orient.  Kyle’s frostbite injury figured prominently in the narrative about my own frostbitten digits.  At one point, when I was able to get stateside, my physician prepared me for the eventual loss of a finger.  I could only think of Kyle, who had lost the same end of his finger in nearly the same spot. That was my big personal brush with mountaineering injury.

Kyle was embarking upon an unassisted bike tour through the Karakoram and we said goodbye as he pedaled off into a dusty Beijing smog-scape.  Kyle had already been granted a Piolet d’Or, climbing’s highest honor for his ascent of the North Face of Xuelin in China    in 2010.  Kyle’s climbing partner was Bruce Normand.  In 2013, while sitting in a remote part of Pakistan called Skardu, I shared several afternoons in the beautiful riverside town being regaled by Bruce’s 209 ascent of K2 documented in the film, Shared Summits.  I asked about Kyle and Bruce told me that he was planning to come join him on this trip.  One week later, while Brian and I were hiking into Broad Peak basecamp, Taliban, disguised as police, stormed base camp of nearby Nanga Parbat and killed 11 aspirant mountaineers.  Kyle assessed the situation and said “F%$# it!” via a well -documented open letter to the Pakistani government.  Brian, Bruce and I had no such option.  We were halfway into an 80 mile walk to one of the most remote places on earth.  Taliban or not, we were heading to the highest peaks on our planet.

Fast forward to 2015.  I’m in Talkeetna, Alaska with John Davis, Neil Murphy and Lee Whitten.  We are making final preparations for a flight onto the Kahiltna glacier for an attempt on Kahiltna Dome.  The weather was bad and we couldn’t fly into basecamp, even had an aborted attempt on the Otter wherein we had to circle around and return for another day.  Two ladies were shadowing us,  Chantal  Astorga  and Jewell Lund.  We made jokes with them about our bad luck and when we finally landed together, had apparently stolen their crampons which set about another line of jokes.  Our team was developing a reputation on the Kahiltna even before arrival.  Apparently the weather had cleared late one afternoon and everyone was looking for us to re-board the ski planes.  Problem was, we were sitting in a movie theater one hour away watching something on a big screen.  By the time we landed on the glacier, Base Camp Annie greeted us on skis, saying, “How was the movie?”  Now these two gals were convinced we were thieves.  (Our gear had become intertwined, I promise!) Those Uber fit women would continue to make the first all- female ascent of the Denali Diamond while we flailed about unsuccessfully on Kahiltna Dome.  I was proud to say we had been alongside history in the making.  What I didn’t know about Jewell was uncovered in the Rock and Ice Magazine mentioned at the beginning of this missive.

News outlets generally don’t write about climbing unless something bad has happened.  And although most of the time this isn’t the case, the article about Kyle is a posthumous dedication to a life lived on the edge.  You see, last year Kyle and Scott Adamson   repeated their attempt on the Ogre 2 in Pakistan with disastrous results.  They were overdue for a week and a gofund me raised almost a quarter million dollars to no avail.  They were likely avalanched off that mountain never to be seen again until a big melt.  It was how Kyle would have wished it.  It wasn’t until this week and the Rock and Ice piece was published that I discovered Lund was Kyle’s girlfriend.  He got her into climbing in 2007 and she obviously took to it with felicity.  She was slated to join him/us in Pakistan in 2013.

Strange are the paths that bring climbers into the big mountains.  Sadly too are the ways in which they take people out.   My partner, Brian Moran, still suffers from his 100 foot fall at 18000 feet on Broad Peak in 2013. There were three members of our team who did not return from Broad Peak.  As an airline pilot, Brian was was forced to miss one year of work.  There were times when it wasn’t certain whether or not he would keep the leg with infection an ever present nemesis. To this day, he still cannot run and climbing has been relegated to a thing of the past. Here is a clip that summarizes our experience there. https://www.youtube.com/watch?v=42um-dpYDyk&t=2s

It sounds like Alan Arnette will make a predictably strong recovery, he is a strong and seasoned climber, veteran of dozens of Himalayan expeditions.  At one point, in 2007, while descending from the summit of Denali’s West Buttress route, my team almost suffered a similarly great tragedy as my rope mate, Dan Walters fell 30 feet into a bottomless crevasse. 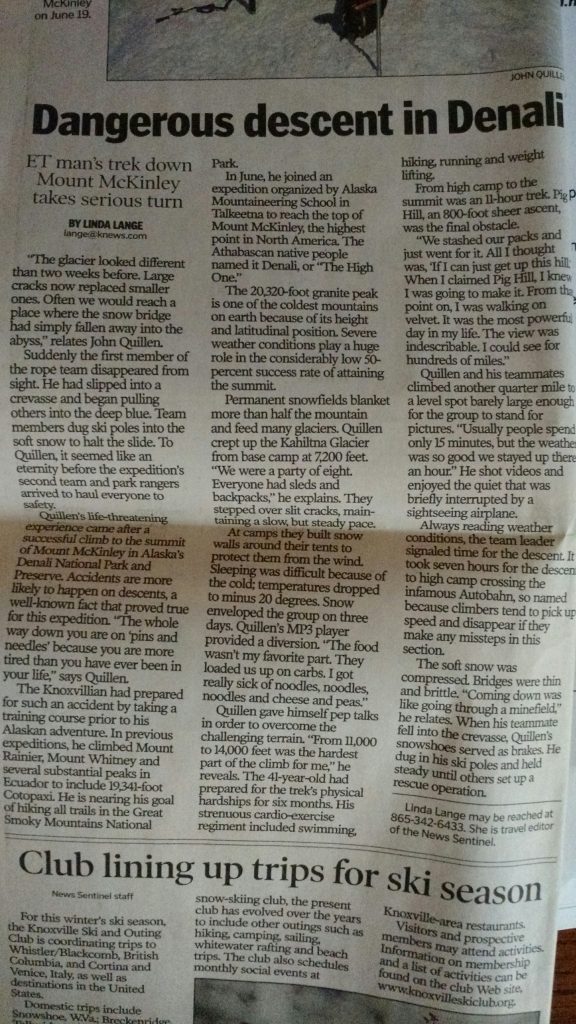 After this four hour rescue, all 11 of us bedded down without tents in a growing storm at 9500 feet.  Unbeknownst to me, we were beside a tent that housed Alan Arnette who was making his second attempt of the “High One”.  Alan’s luck on Denali mirrors that of mine on all 8 thousand meter peaks.

It was on this Alaskan expedition that I first made the acquaintance of Brian with whom I would go on to share many similar trips throughout the world.  As we skied and snowshoed back to Kahiltna basecamp in the ever present midight sun in 2007, snowflakes covered our wearied bodies as my team limped into the landing strip for what would prove to be the last flight out for days.  Brian was stuck at high camp, having made his summit bid just one day later than us.  His team suffered greatly and they almost lost a guide to exposure in winds that created -20 temperatures.  His summit shots look like true Alaskan epics while mine could have included an umbrella drink.  Such is the variance within one day.

The Rock and Ice piece on Kyle emphasized the impact this young man had upon a burgeoning sport. He pushed himself to limits and affirmed the mountaineering adage, there are old climbers and there are bold climbers.  But there are no old bold climbers.  Jim Whittaker said, “If you’re not living on the edge, you are taking up too much room.”  That’s easy for Whittaker since he is pushing towards 90.  All of us have had close calls in the mountains, the key is to take those lessons and make sure they aren’t repeated.  I wish Alan a speedy recovery. It is events like these that remind us who is really boss on high peaks and no matter what your preparation, experience or skill, there is still a great deal of luck that brings us back intact.  For those preparing for Denali or the Himalaya this spring like my friend Andrea, I wish Godspeed and good luck.