We were indecisive about our July 4th weekend plan.  The weather was sub optimal so we determined that waiting until Sunday would obviate some of the crowds and rain.  We settled on a plan to car camp at Deep Creek so Laurel could get her miles over there. ( I have abandoned any semblance of finishing my second map even though I probably have less than 20 miles remaining. )  We fought a monster bear jam on the Newfound Gap road and arrived in Deep Creek car campground after noon on Sunday.  As expected, it was a zoo full of idiots.   Dogs competed with children to see who could outbark each other. Tubers floated lazily, cigarettes in hand along with their lap dogs and children. Laurel and I strolled about to find a tent pad.  There are many reasons to despise car camping.  It is akin to shelter stays in my book.  It attracts those who need creature comforts.  Personally I find it more of a headache than not.

It did afford me the opportunity to fulfill one of the Southernhighlander covenants.  And that is the special skill of appearing in the flames of campfires unexpected. As we walked around in search of suitable digs for the evening, I spied what can best be characterized as the main reason I modified my backcountry associations some years ago.  Alone, likely stoned and sorrounded by dogs and a daytime smoker, the drug dealing geriatric pretended not to see us as he made a beeline for his car knocking his noontime beer over in the process of escape.  Laurel noted that perhaps he was going for a gun.  I said he was more likely going for another zanax and depends undergarment. We ended up planting ourselves not far from that area, there was little from which to choose on this extended holiday weekend.

I now knew that there would likely be other familiar faces from the old group about.  As we erected the tent, I prepared for a trail run.  Deep Creek is a great place to click a few miles so I headed up toward the Indian Creek Motor Loop.  Before long, I had passed the infinite line of inner tubers and cyclists and was enjoying some moderate climbing up past the split for Stone Pile Gap.  After an hour or so, I turned around to descend back to the “mayhem”.  There were fishermen, hikers, backpackers and photogs.  It was a jam packed Deep Creek experience.

Rounding the corner where Deep Creek trail passes over the water is a bridge.  On it were two more familiar faces that I had not seen in about two years. It was clear they had not expected to encounter me emerging shirtless and covered in sweat from the backcountry. 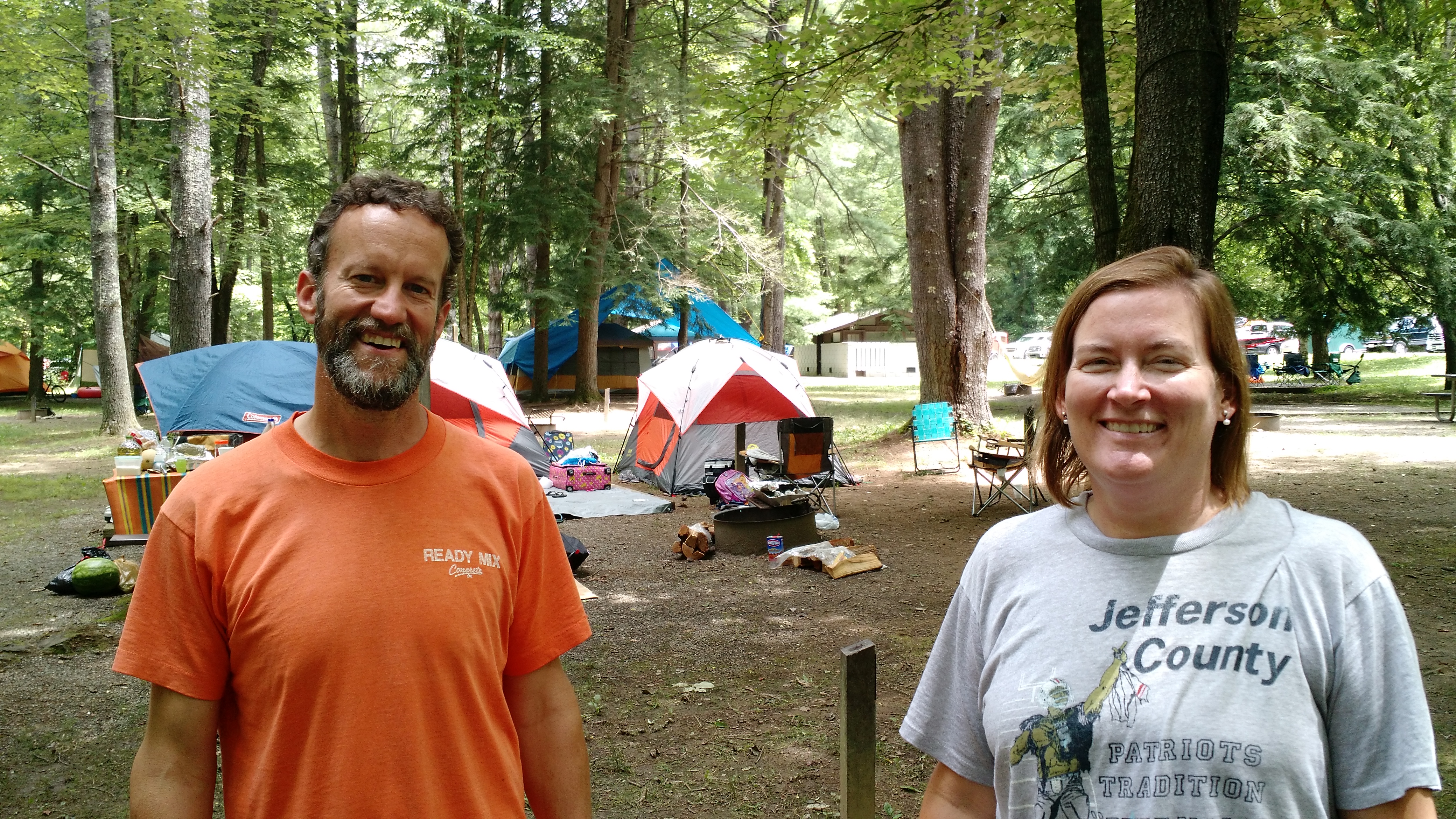 It was the Trail Bailer and Jenny.  I returned to camp and they came over to visit and catch up.  There was a lot of catching up to do.

Laurel and I decided to go into town and chase some pizza in Bryson City so we bid farewell to the Howe’s and missed the pizza place by 3 minutes. We were on the verge of missing food altogether until the owner of the sports bar agreed to feed us.  I was ravenous after a 6 mile trail run.  We retired early in hopes of Laurel embarking upon her quest in the morning. The night-time arrivals next door saw fit that sleep would not occur as they banged on tent poles and yammered in Spanish from midnight until two am.

Morning saw neither of us moving far from camp as I pressed coffee and lounged about.  Jenny and Will returned, having suffered the same fate in their site with two German Shepherd dogs competing with the children in that area. Laurel packed up for a 10 mile trek around the notoriously unremarkable motor loop.  I love hiking and she later remarked, ” I should have known when you declined to join me on this one, it would suck.”  And the motor loop really does suck.  I did little that entire day but lounge around camp, visit with Will and Jenny and drive up to Stone Pile terminus.  It rained while I was there but I decided to amble up to the cemetery and lay in wait for Laurel who was scheduled for a 5 pm appearance.  On schedule and fighting sprinkles, she was subsequently sprinkled with a bigfoot laying in wait.

It was collectively decided that another night in that maelstrom of humanity was more than either of us could bear.  Laurel had already done Leconte and Brushy mountain trails day-hiking last week.  It was solid mileage for the mileage queen. Given that we both had trips upcoming it was agreed that we would head back over the mountain.

If you didn’t get a chance to see the monster bear video click on last weeks blog post.  Laurel has also posted another bear video from Brushy Mtn.  She saw three more on that trip.  They are active.

I will be in Colorado next week, so expect some pics of Western Slope mountain fun soon. 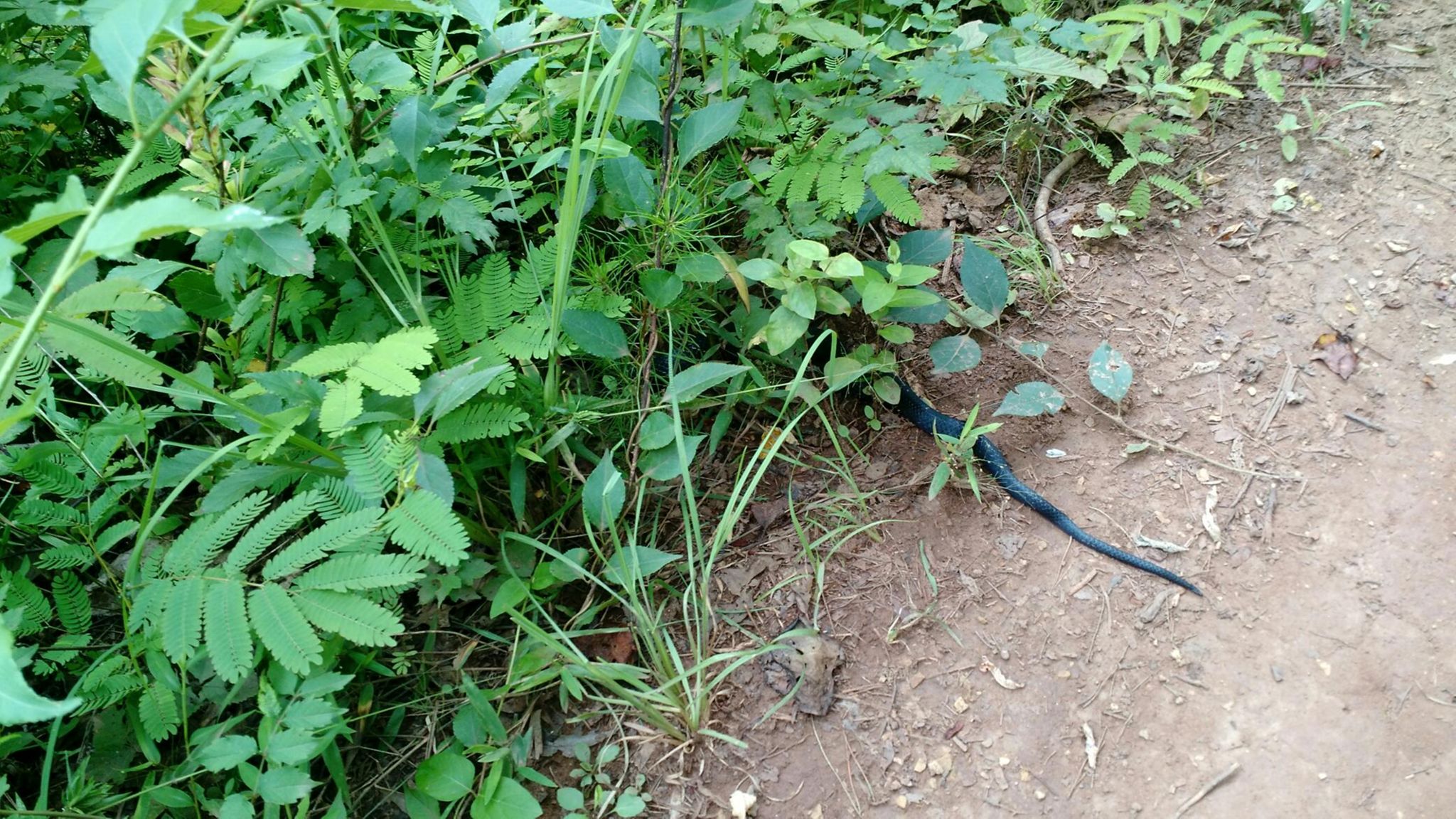 One can’t help but absorb the potential symbolism. For me, the king of snake enounterers it was time to quit ignoring the messages. The universe speaks to us in many ways.  I have a gift/curse for snake encounters so well documented through the Southernhighlander pages that a certain notoriety has developed as a result.  This guy crossed my path on Tuesday as I rode the mountain bike through Baker creek preserve.  My three riding partners had just called it a day.  We had been launching off the table tops of Cruze Valley and Barn Burner downhill runs. Before the July 4 rains enveloped, I was alone on the acreage when I rolled up to this fellow. You only see his tail, and this is a frequent position for black snakes in my world.  The tail was the tip of a longer serpent, beautifully marked with white marbling rolling across his scales.

A snake crossing your path could, at first blush, have many negative connotations. However, ancient wisdom holds quite the opposite. Across the board, it is generally considered a sign of metamorphisis and shedding of old skin. Contrary to popular belief, snakes aren’t necessarily bad. Numbers 21:8  The LORD said to Moses, “Make a snake and put it up on a pole; anyone who is bitten can look at it and live.” This was of course in response to a plague of snakes and snake bites. I’ve heard preachers struggle more with that particular symbolism than just about any in the Bible.  Snakes have long been regarded in Eden terms.

But for me, the consistent crossing of my path by snakes means much more and particularly in context of that weekend. Snakes symbolize healing, a connection with the earth, awareness of surroundings and shrewdness.  When Jesus dispatched his disciples, he conveyed the following dispensation,  16 “I am sending you out like sheep among wolves. Therefore be as shrewd as snakes and as innocent as doves. 17 Be on your guard; you will be handed over to the local councils and be flogged in the synagogues.  Matt 10.

Earlier in the day I was rounding another corner and startled a hawk that had a freshly killed rabbit. He picked up that animal with a talon but was unable to fly with this meal that probably approximated his own weight. Because I was on the mountain bike, he had little time to escape with his bounty. Whether he was feeding or just killed the animal is undetermined.  But to the treetops he retreated as my biking buddies rounded the corner and I related the tale.  They spied the fresh kill and reveled in the grandeur of nature that is often cruel and powerful but equally awe inspiring as the hawk patiently awaited our departure.

In nature is strong symbolism embraced by all religions of man.  Losing our connection with nature is the genesis of many psychiatric disorders.  ADD/ADHD did not exist a few decades ago.  I struggle to compete with video games when we take alternative school kids to the Smokies. The ones who make any sort of connection with the natural world are, to me, fixable.  Not that the others are not. But like the black snake, we need to feel the rhythm of nature, move shrewdly and with little impact upon our environment and share our healing powers with fellow man.

These are gifts sorely needed today when our faith is placed in leaders and political figures who have never experienced any connection whatsoever with the natural world. Of course someone proposes cutting the Environmental Protection Agency who has never been into the natural environment.  Of course political leaders support re activating coal mines and dropping out of the Paris accords when they have never left an ivory tower and are bowing to corporate interests to the detriment of all other humanity.

It is not a revolution until there is blood running in the streets.  When 20 million people lose their health care so a bunch of millionaires can receive a tax cut, that time may be nigh.  And if it happens, then we will be shedding skin collectively.  As someone who has experienced the shedding of skin, I can attest it is painful and at some points blinding when that last bit covers your eyes for a spell.

But what is left is a new skin and fresh eyes.  It is our job to see what we are supposed to see instead of what we are told to see by false prophets and corporate charlatans with agendas to match their egos.  For someone with children to support the aforementioned policies is blindness of an unfixable sort.  But the sins of the Fathers will be visited upon their brood.  Be wise and shrewd and good stewards of our environment.  We are judged according to our treatment of this sacred trust.