We weren’t a tenth of a mile up Rough Fork when we encountered this fine specimen. He was docile but gave us a nice rattle show that didn’t translate as well to the video.

Laurel and I had some miles to finish.  Have you been up Rough Fork?  It is about 1300 feet in a mile and a half or so.  That is fairly steep. 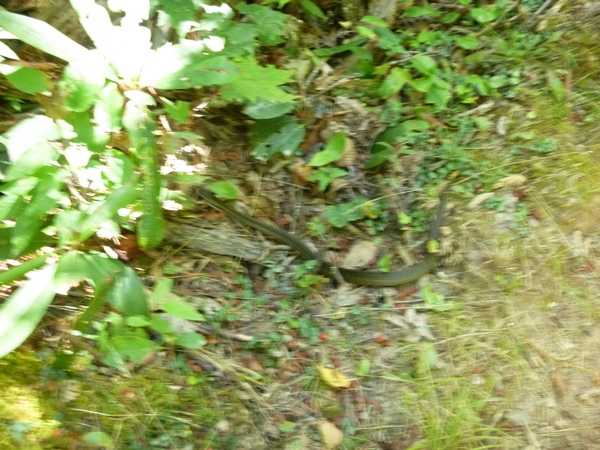 It was a two snake trip, about par for me.  This was an ordinary Garter snake just minutes from the Rattler. 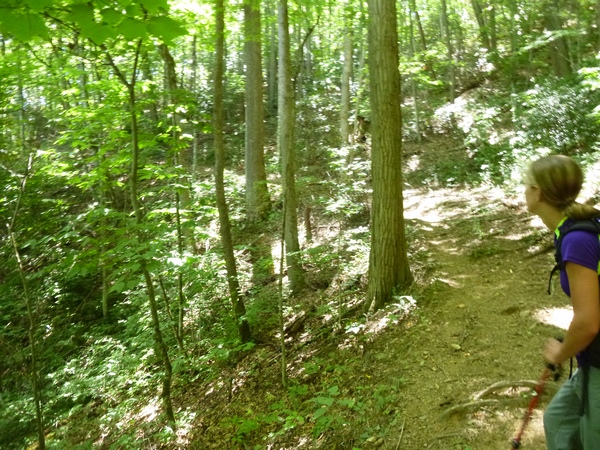 She wonders if it ever ends. 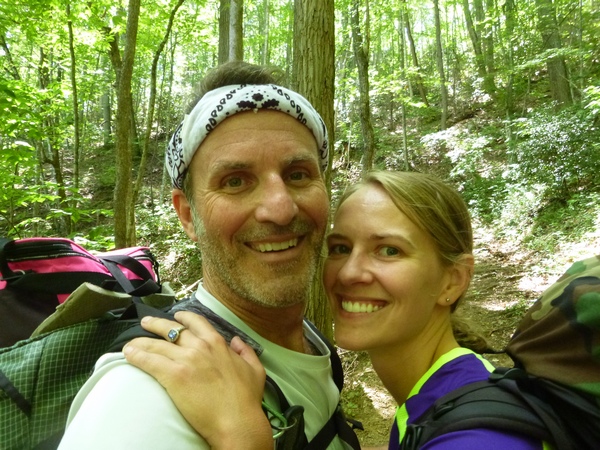 I lied and told her it would. 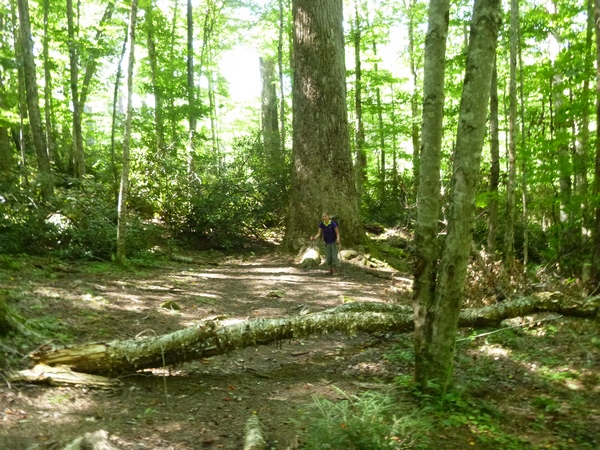 There used to be two Grand Poplars, now there is one.  It is the largest in the park, we are told. 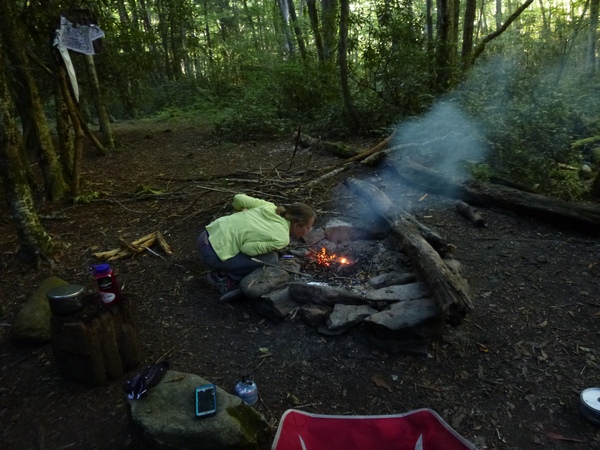 Caldwell Fork was virtually empty.  So we grabbed the nice creek spot.  I will have to say that it is probably equivalent to Rabbit Creek on the TN side.  Laurel quickly proclaimed it one of her favs and definitely best on the NC side. 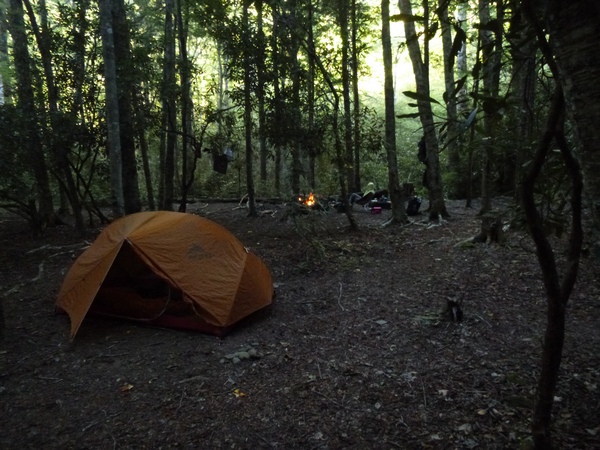 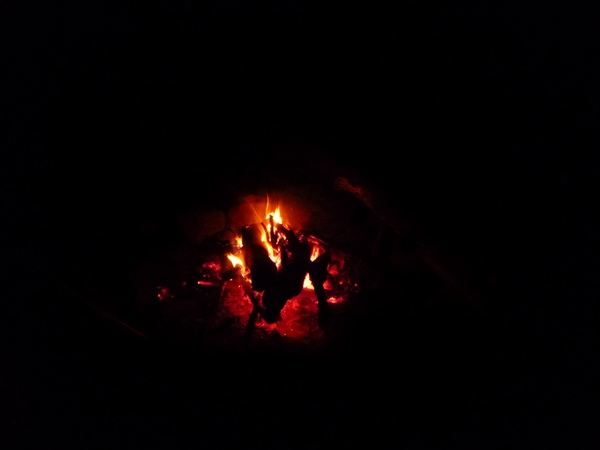 Two weekends in a row of perfect weekend weather is unparalleled.  Last weekend found us in the Red River gorge and this one placed us by a cool creek on a crisp August evening that required a fire.  When is it that cool in August two weekends in a row? 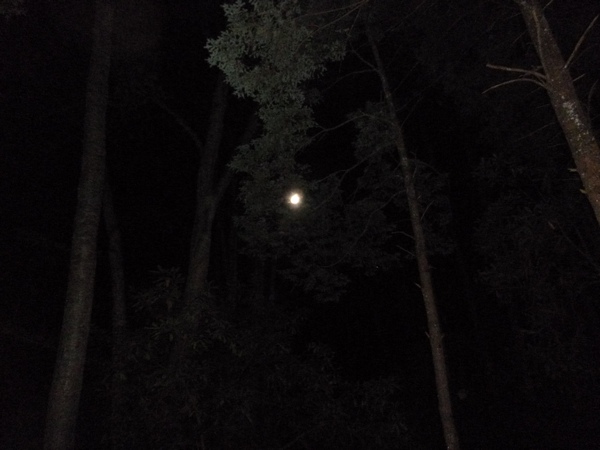 And a near full moon to bark at the coon?  Huh?  What?  How about it.  Great outdoor Karma. 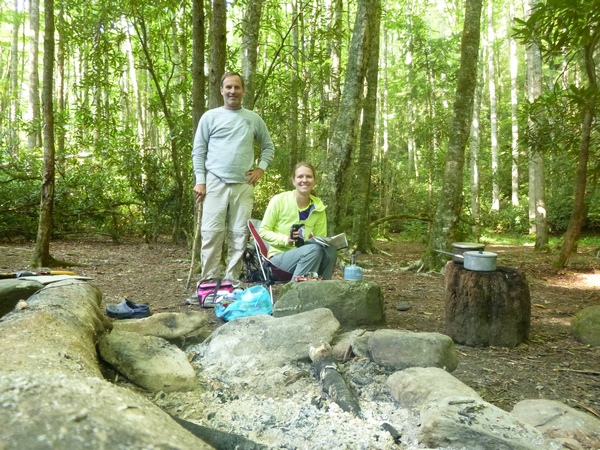 Life is good in the “uncrowded” backcountry of the Smokies.  On a beautiful weekend, we had a campsite almost to ourselves.  (One other group from G-burg came in after struggling over Rough Fork)

One thing I will note is that Caldwell Fork is absolutely ruined from horse traffic.  So ask yourself this question, if the NPS in their infinite wisdom, can close a campsite because it is overused, why would they not close a trail for the same reason to horses?  If you have been to Cataloochee then you see that horses have rutted, mudded and eroded every inch of the place and still bridges are out all over Caldwell Fork.

You can walk on a path and step from manure pile to manure pile with little ground in between.  Why wouldn’t the NPS close it to horse traffic?  Money, clear and simple.  The Catalochee and Cades Cove horse consessions but thousands back into the NPS in form of concession fees.  So they dictate policy there.  Just like national policy in Washington.  The reason we don’t have a healthcare bill is because folks like Lamar Alexander are breaking their necks to find a way to avoid single payer or Medicaid for all.  He wants to protect the Blue Cross Blue Shields of the world from losing relevance and billions of tax dollars.  That is who he is protecting.  It sure as hell isn’t you and me.

And we all know that Lamar was the main reason we have a backcountry fee.  Remember, we offered to give them a software reservation system for free.  But the NPS had no interest in that because it wouldn’t allow them to get kickbacks from Recreation.gov and all the other vested concessionaires.  Follow the money folks.  That is where all evil lay.  Just as it was said in Watergate, the money trail will lead to the sin.

And there is plenty of sin to be uncovered in Washington, I assure you.

I will leave you with a quote that is extremely relevant today.

When we first met with Dale Ditmanson prior to our lawsuit, he assured everyone he was going to do so many things.  What he did was bought time to prepare themselves for implementation of this backcountry tax.  A bureaucrat is good at doing that.  Lying has now become institutionalized in the past six months.  I implore you to get your news from outside sources because your local media and others have agendas of which most are unaware.  There is a reason WBIR never covered any controversy in the Smokies during the fee fight.  We now know it has to do with Blackberry Farm advertising revenue.

Stay sharp folks, its going to get worse.  The Secretary of the Interior threatened an Alaska Senator if she didn’t vote for the White House healthcare bill by saying he would lock up public lands in Alaska.   These mafioso tactics are now accepted.

Quit accepting this. The world needs some strong men and women today.  Do something folks, take your freedoms back. Other countries have great healthcare, a self employed guy like me shouldn’t have to pay almost $500 a month for lousy health insurance. Yet the White House answer is to rollback protections for nursing home residents.  Aka, your parents, grandparents and consumers of healthcare.  He doesn’t want you to be able to sue healthcare providers if they sexually assault your parents in a nursing home. http://thehill.com/regulation/healthcare/345411-fight-over-right-to-sue-nursing-homes-heats-up  If we can spend a billion every six months in Iraq and Afghanistan, we can insure and protect our own folks. But Trump and Lamar want to protect the theiving corporations.  And selling their lie is a news network that really pushes Fake News, on a daily basis.

Now lets enjoy some music.  I like this new Killers Song.  Very relevant.