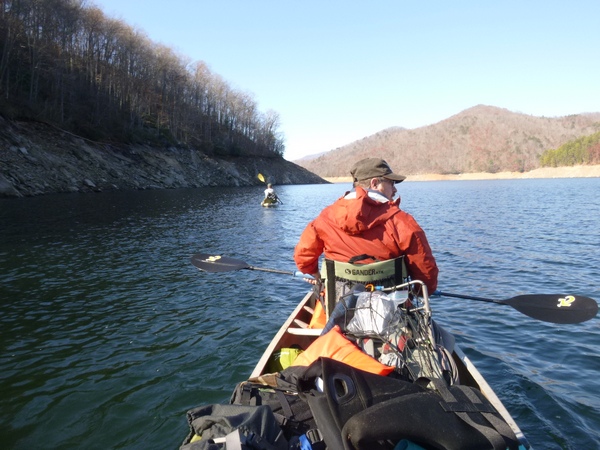 It was a brisk morning that turned into a glorious day as the Highlander Navy set sail from Cable Cove across lake Fontana on Friday morning. Martin navigates the brisk waters expertly in a heavily laden old 17 foot canoe that was towed across the dragon by an even elder 1971 Ford truck. 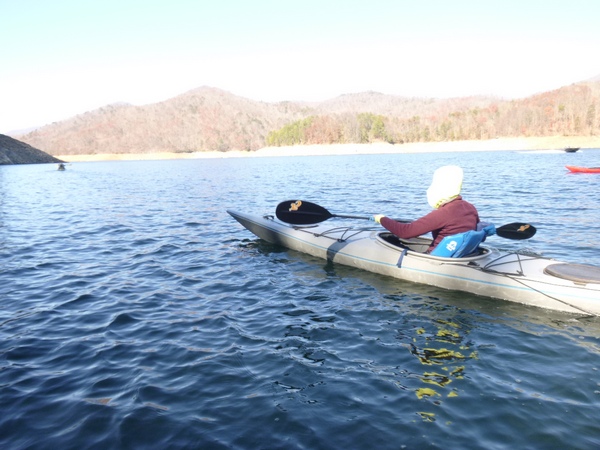 Mtn. Laurel, who is now fully acclimated from out last week’s outing to Spence, steers her own vessel towards yonder shore. 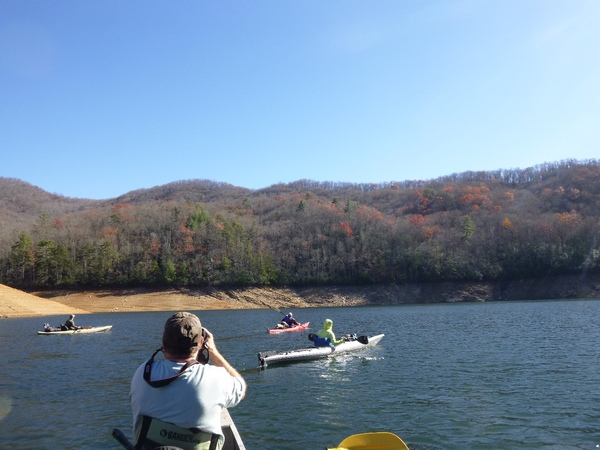 Kurt and AJ complete the armada. Here we are witnessing an Eagle soaring high above at Ollie Cove. 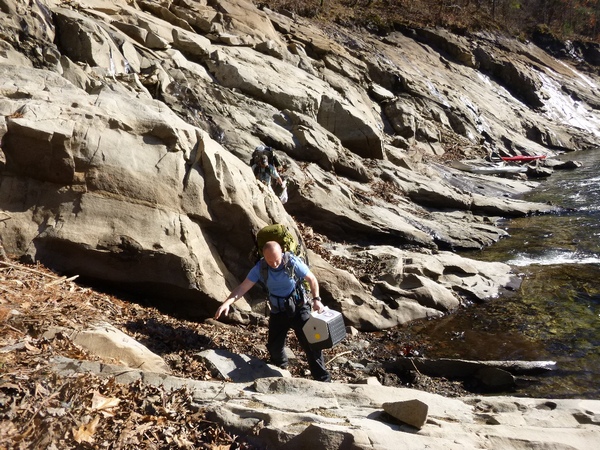 Low water levels made our docking and portage somewhat tricky. Then there was a half mile walk into an almost empty Proctor campsite. 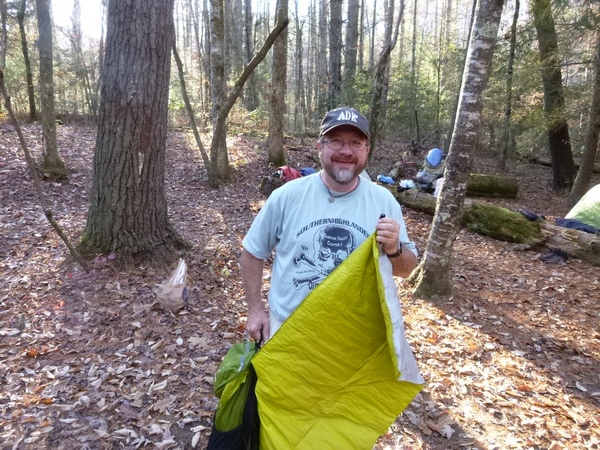 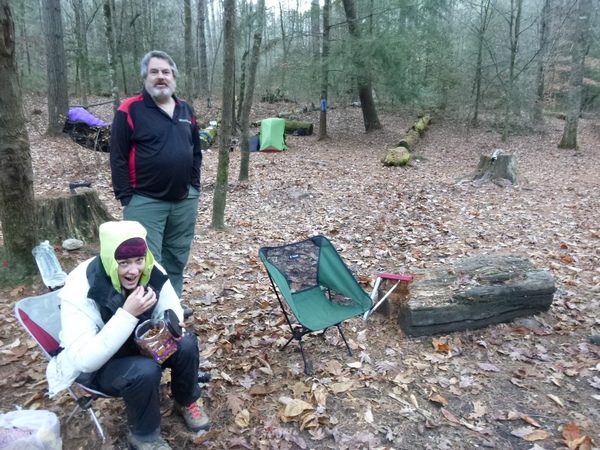 And Laurel does what she does best as AJ oversees! 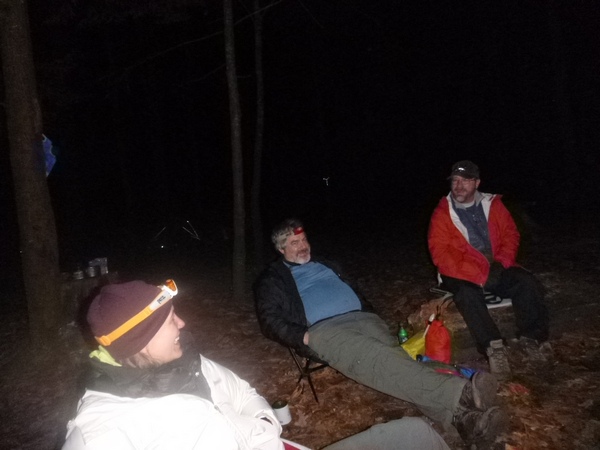 Much merriment ensued around a crackling fire and chilly night. 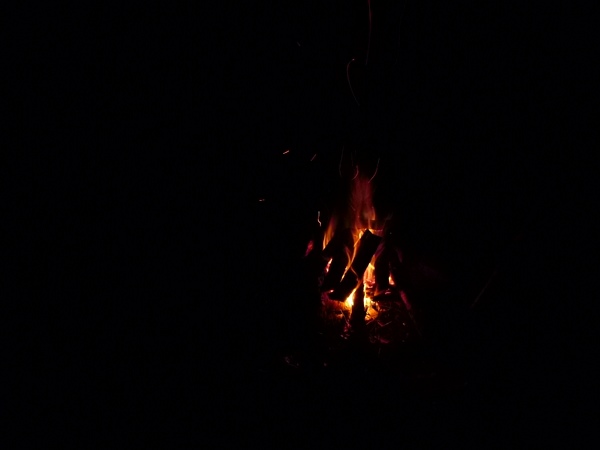 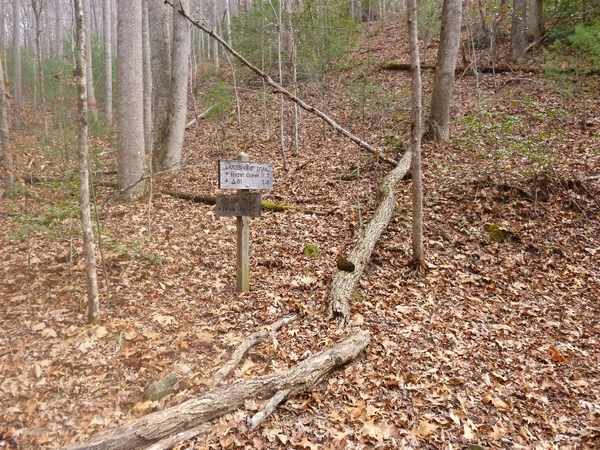 The next morning we went in a few separate directions.  Curt set about to trout fish with his fly rod.  AJ and Laurel and I walked over to Ollie Cove.  We are at Hazel Creek because Eagle Creek is closed for bear activity.  It has been closed for a while. I soon prevailed upon our group to undertake a bit of bushwhacking.  AJ and Laurel were game.  What we did was take off into the woods between Ollie Cove and Hazel Creek.  For a couple of hours we played in the woods, up and down hills and hollers. 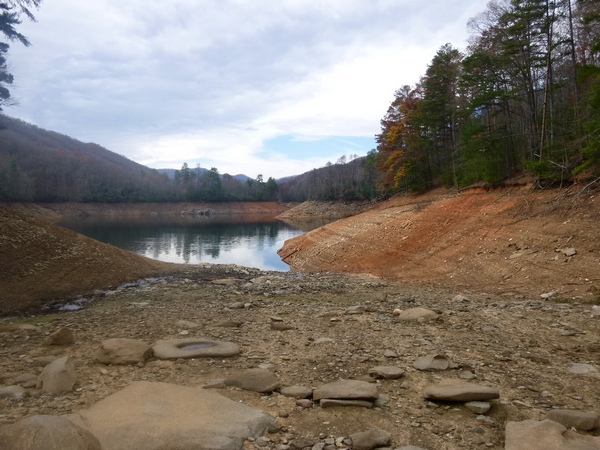 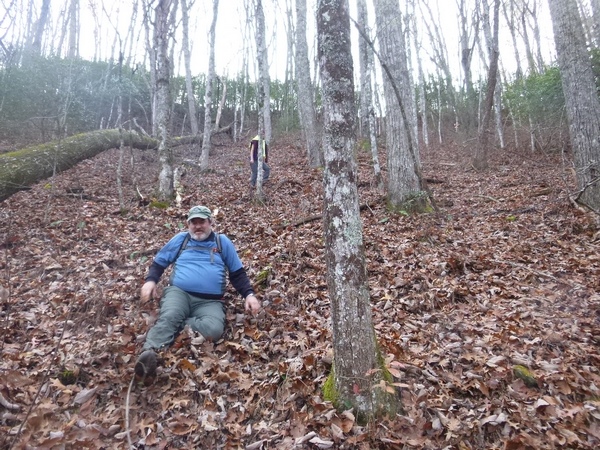 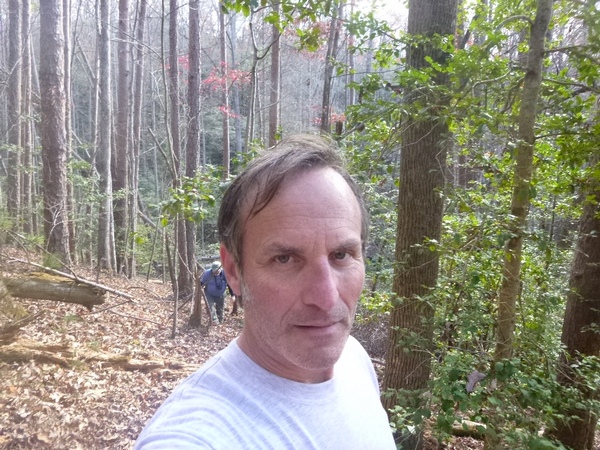 Up these hills and down.  I had honestly expected to find traces of the old Proctor civilization but none were to be had. It was a good workout, though. 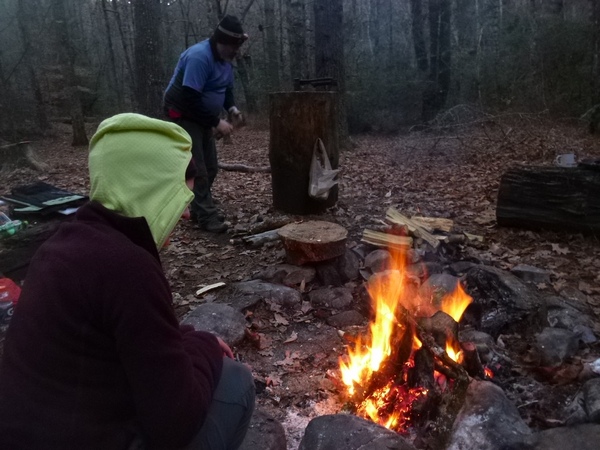 As the sun dropped, so did the temps, so we raised them. 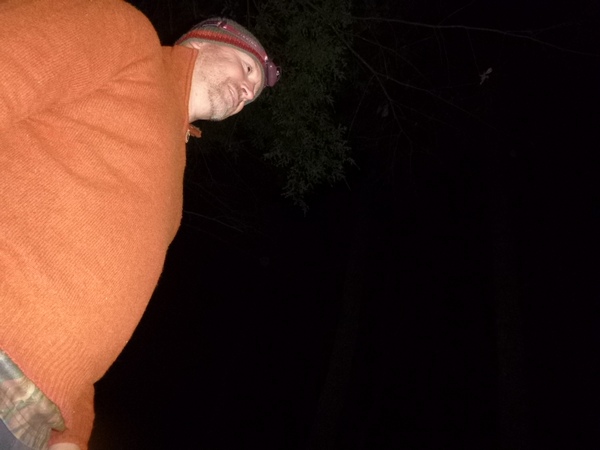 Curt was also warming from his day in the chest waders.  His luck was a bit better than ours, having hooked a small one but nothing else.  It didn’t matter. We were soaking in the Autumnal goodness of Hazel Creek and Proctor. 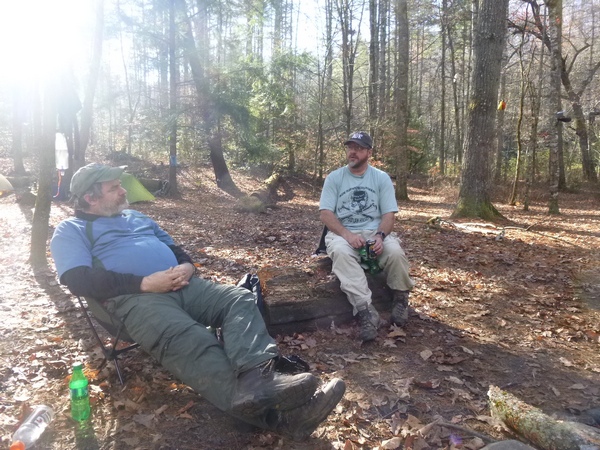 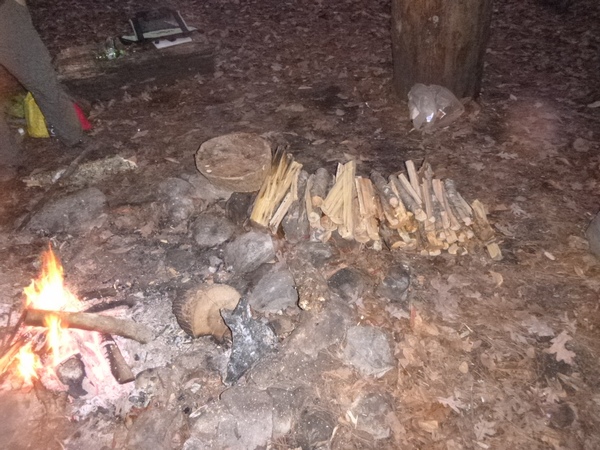 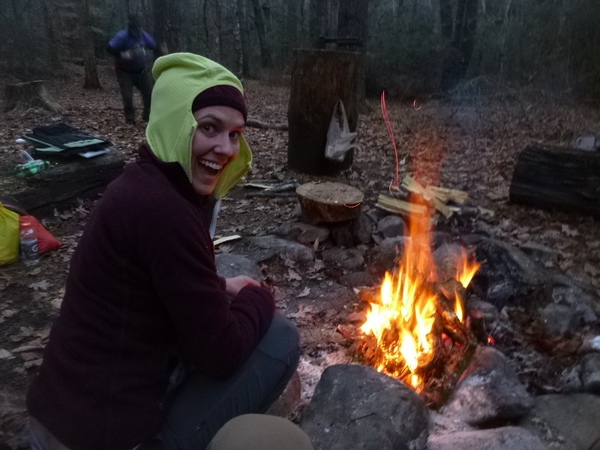 From Florida to the mountains, Laurel has had a busy week. And glad we were to share her company. 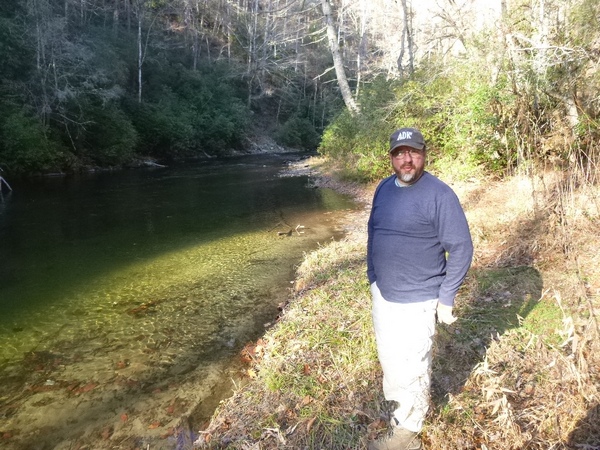 Clear as a bell was the water flowing from old Proctor. 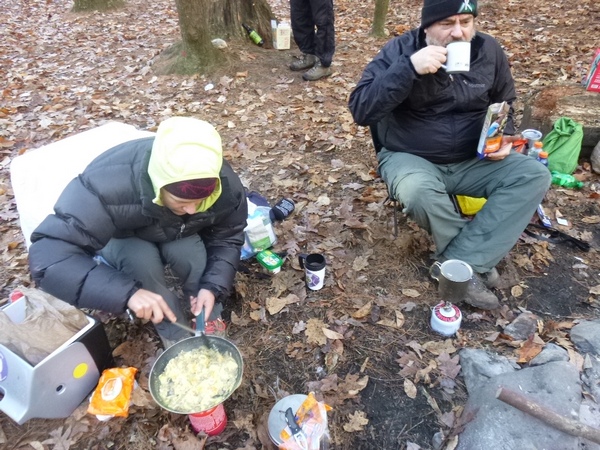 We toted some show food and no one went hungry on this trip. Eggs, sausage, you name it. Water vessels are quite nice at times. 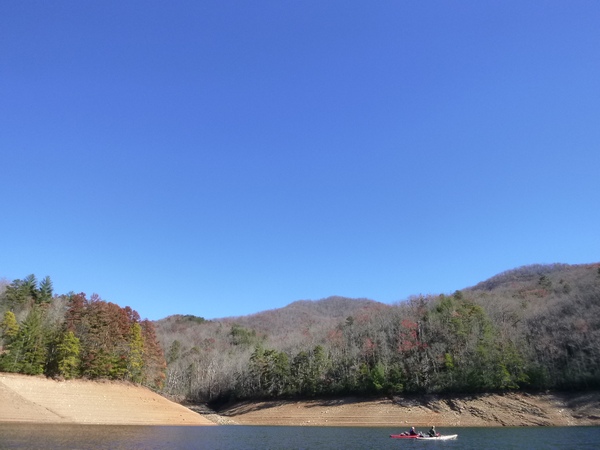 Sadly, we departed Sunday to even more bluebird weather.  It was a three day blessing of perfect company and weather in Proctor. The seas were somewhat sporty as a bit of chop kicked up around 1 pm when we hit the main channel of Fontana.  But the vessels held up along with their pilots.  Awesome outing.