I’m still sorting through photos, so enjoy this montage of the cloudscape we encountered. It was as if we were breathing with the mountain.  The Hangover was well attended and it was one for the books. Myers did the heavy lifting on the photography so I am sorting through that in addition to mine. 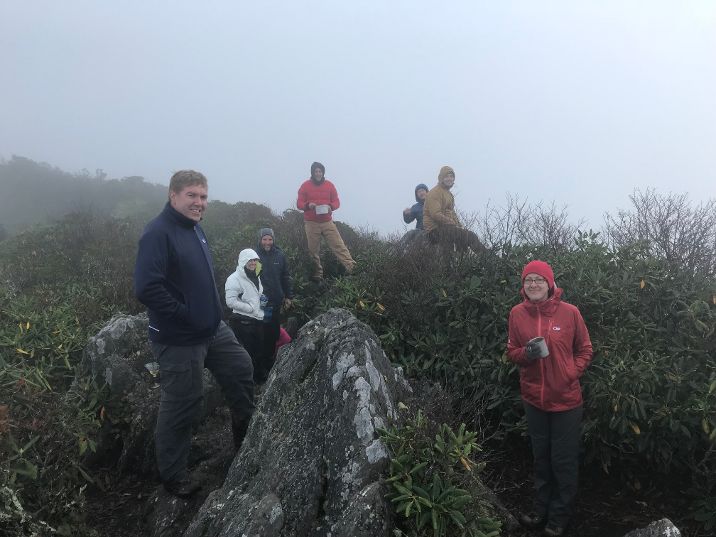 Pictured are from left to right: Mark, Laurel, JQ, Jon Chambers, Kurt, Nick and Stephanie. Not pictured is Myers and the mystery guest hiking cameo person to be named later.

We braved the elements on this one but that was expected as I changed the week due to knowledge that the leaves hadn’t even started changing on the traditional weekend. Fortunately, we had some color. 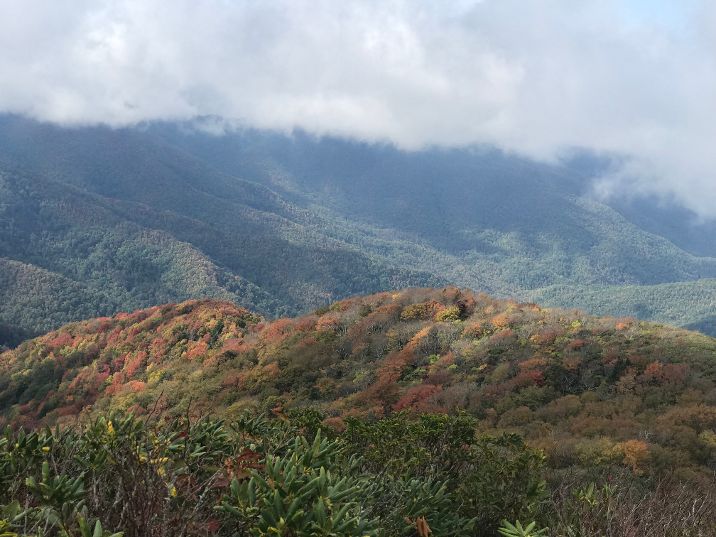 That color was absent from the week before as I ran into Randy Redwood who was there the previous week. He came to the Everest presentation at Little River on Thursday. It was a great event and I really enjoyed meeting the overflow crowd of 120 outdoor folks, old and new. They even set up my climbing gear as you can see on the left which the kids seemed to enjoy. I really appreciated seeing my friends there and meeting some new ones. Great potential collaborations have arisen as a result. I will expound upon that later. Many thanks to Bert Emerson and Erika Gilbert at LRTC for promoting the event. 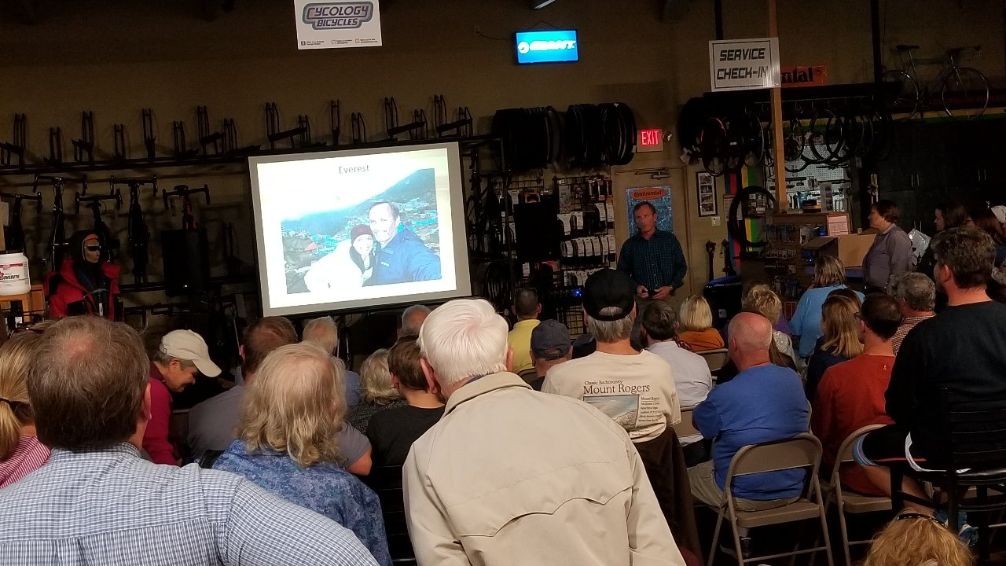 So Chambers and I departed from Maryville at 3.30 pm the following afternoon, hit the traditional Lead South trail at 5.15 and I made it in time for what remained of the sunset. Chambers, however, missed the turn at the gap and headed up the Haoe. He was setting up a tent when I found him but his pack had to weigh about 75 lbs. He is a cross fitter so I just allowed him a little extra workout for his money.  Soon we joined Myers and Nick for an incredible, and record setting Highlander fire that first night. We braved the shifting winds and prepared for the impending rain. 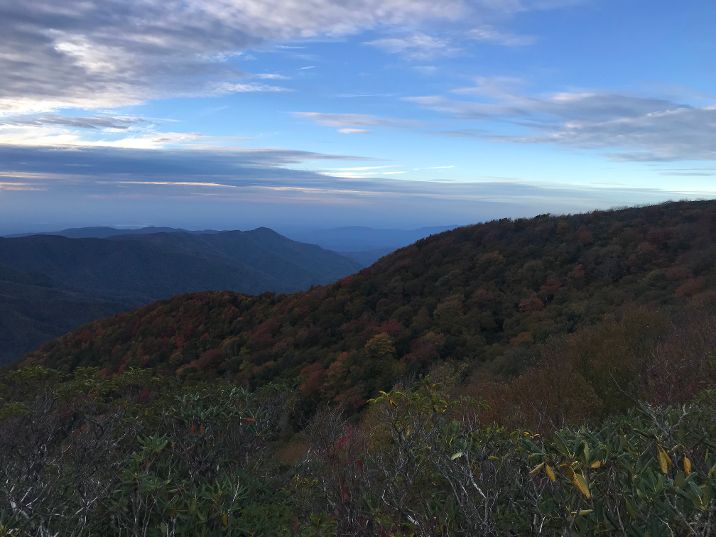 The rain was well timed as we hit the bed at midnight, about the time it started. I would say it made for great sleeping weather. 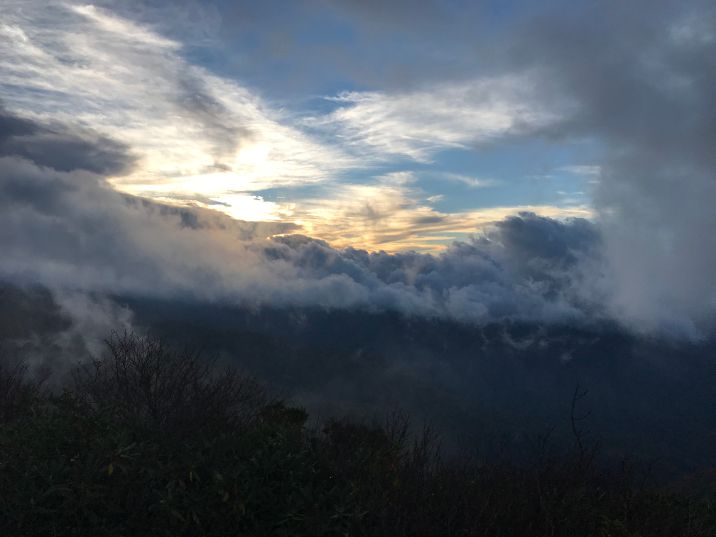 BTW, all these pics are Myers unless otherwise noted.

Coming up, Day 2 and the new arrivals plus an unexpected old friend. (If you can’t tell, I’m doing this between clients at my office)  ……………….Stay tuned! 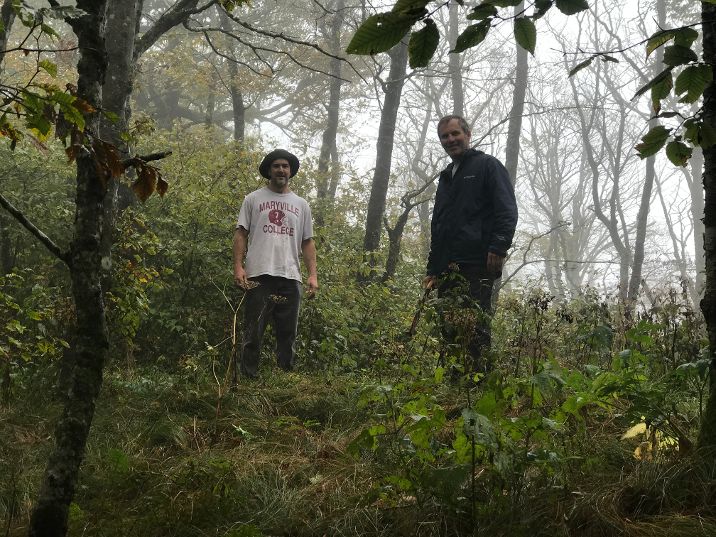 Chambers and I set out to fetch wood and water, that was after the night of rain. 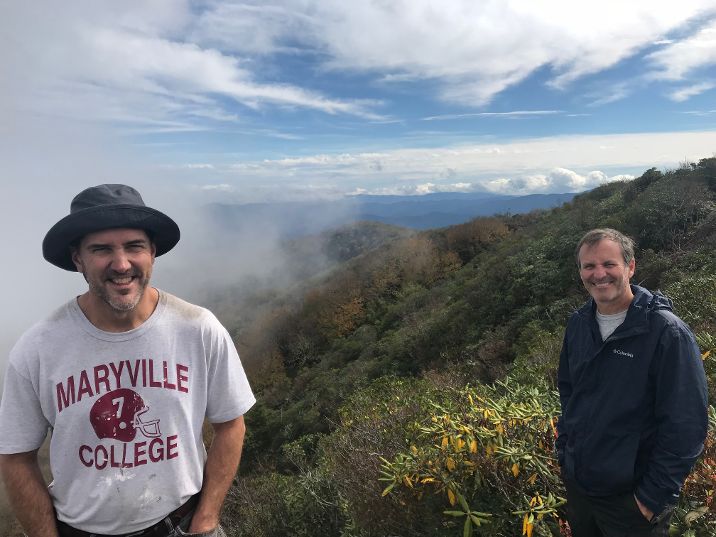 We ran out to the rock in between clouds and it was amazing with the mountain breath engulfing us. 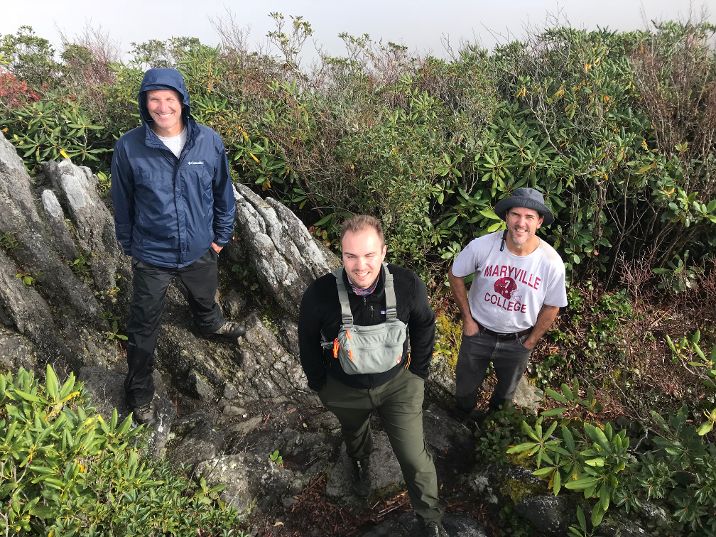 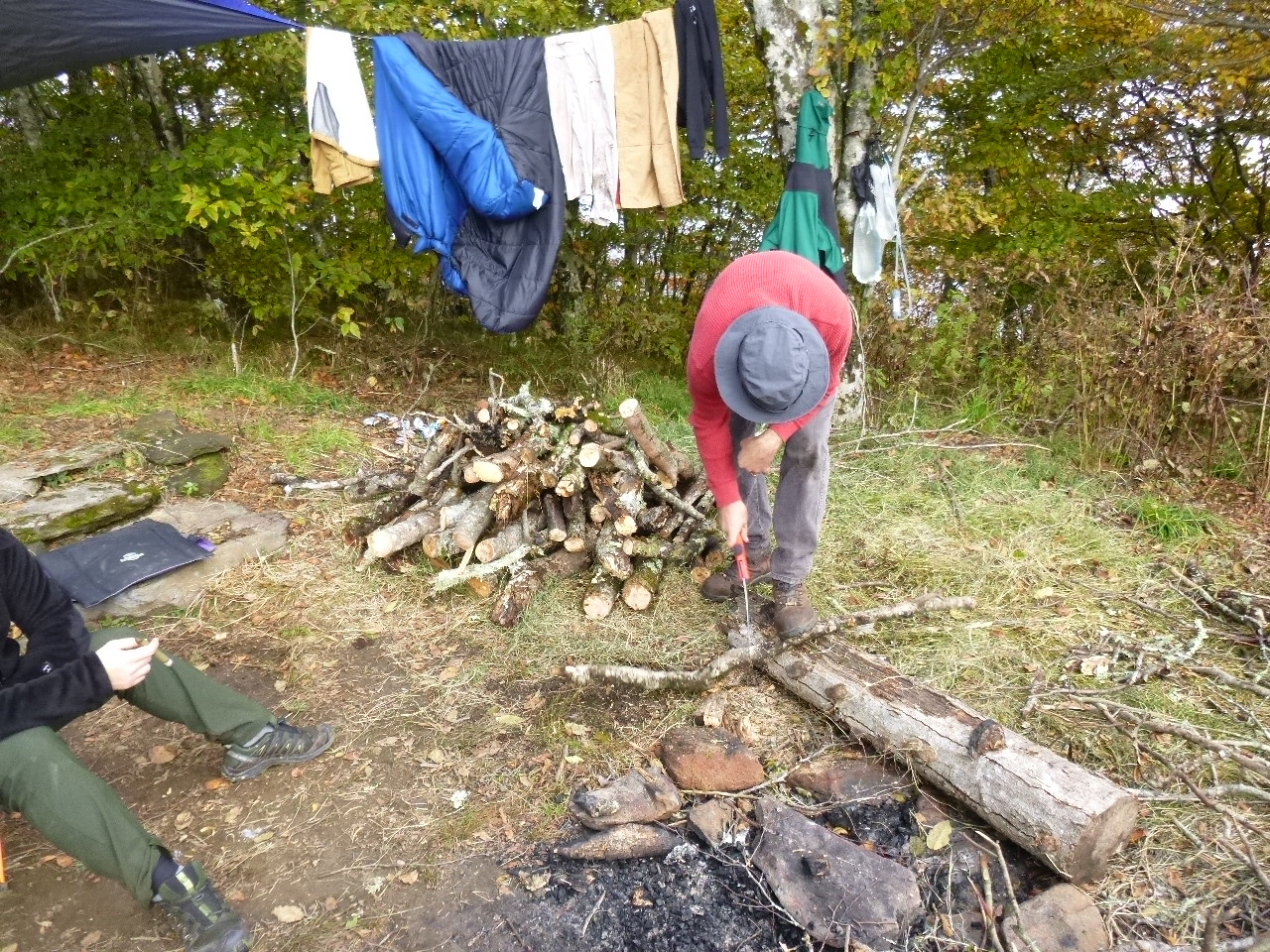 Newbies get wood duty in the Highlander fold. Can’t remember having a fire this huge up on the hill. We needed it with 20 degree temps. 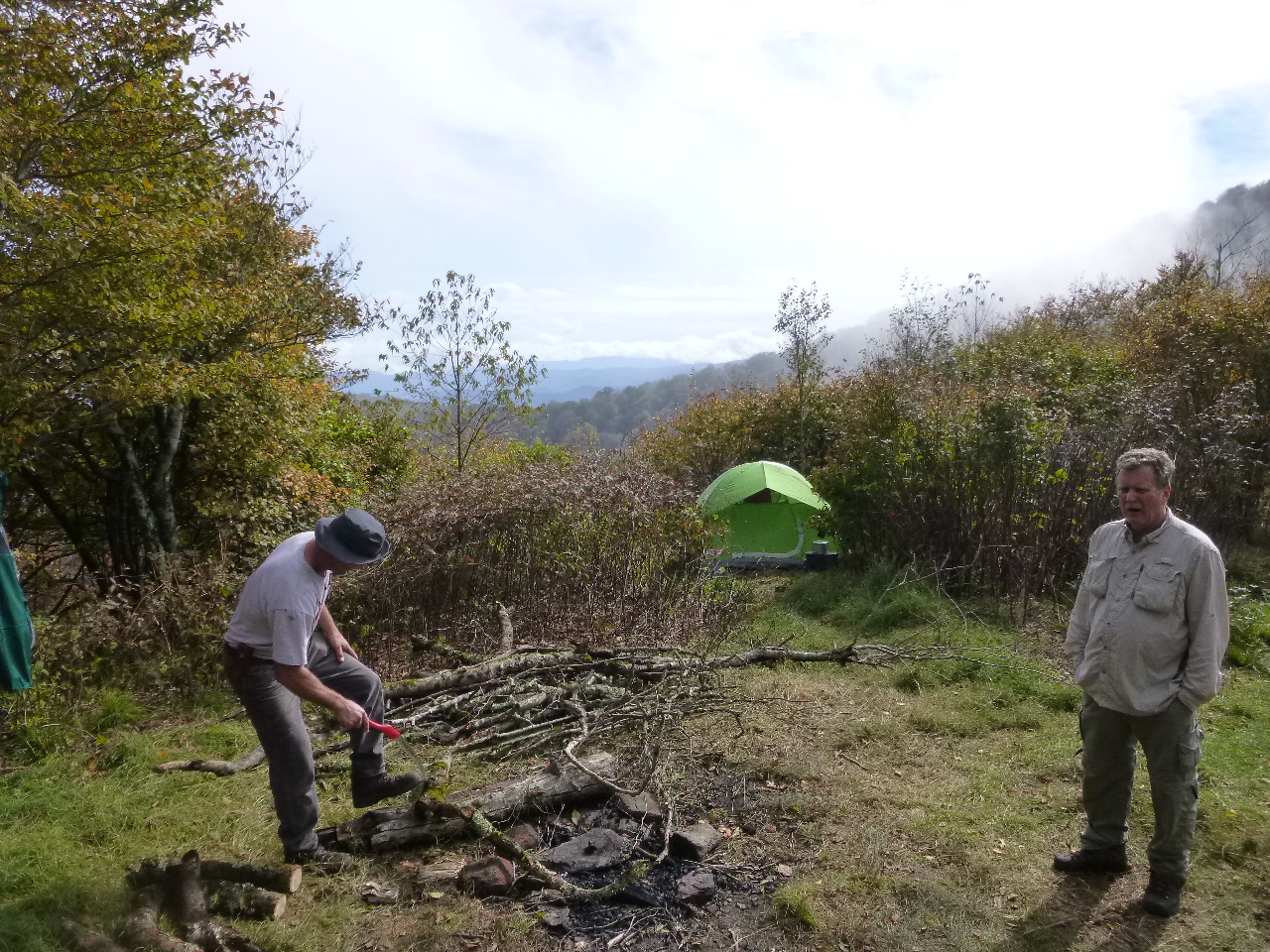 Myers doesn’t mind that the sun is making a cameo and Jon is sawing. 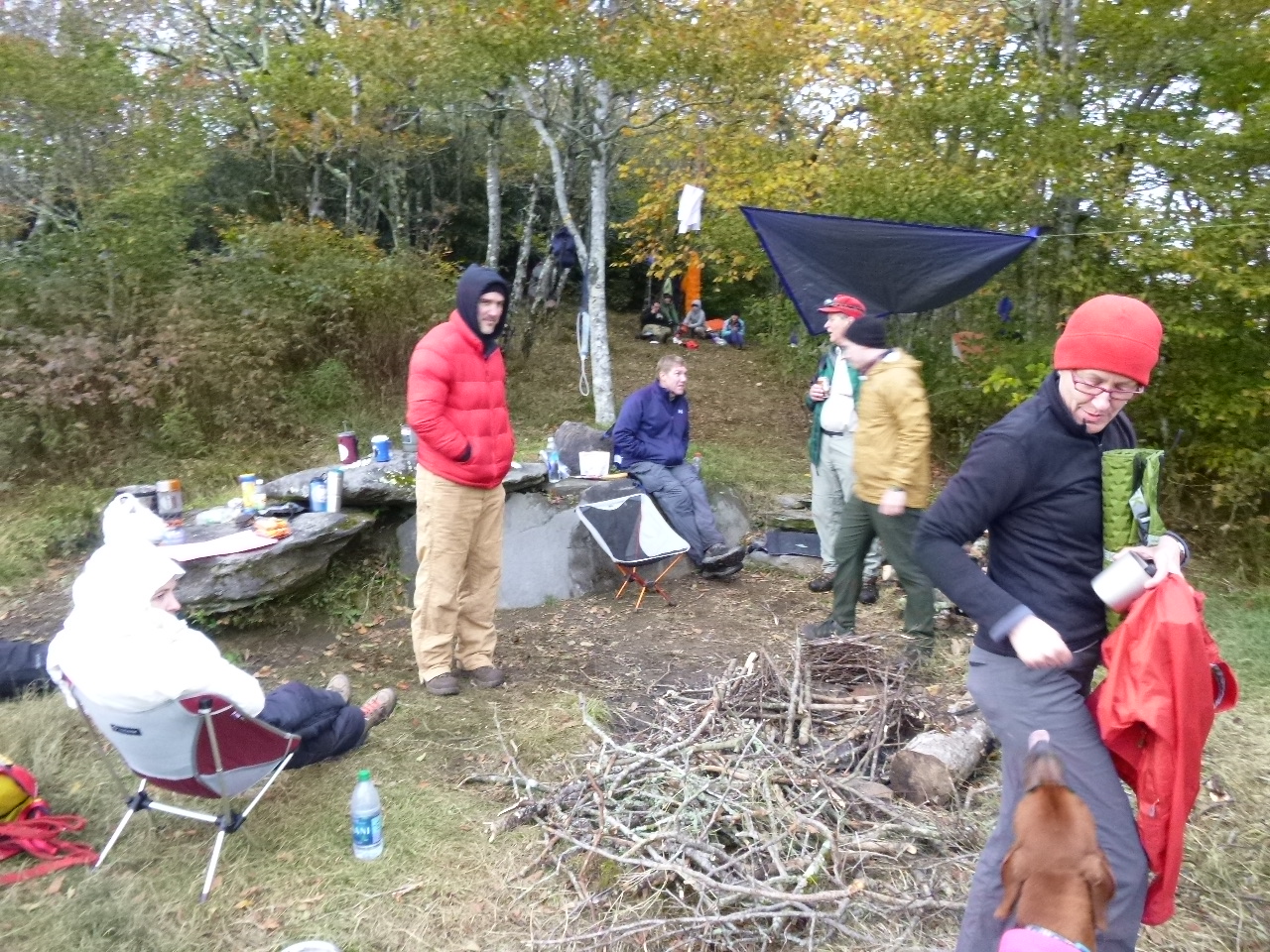 Before long, Mark and Stephanie and Laurel and Longstreet arrive Saturday afternoon. Right off the bat, Longstreet makes a scene and rolls in excrement, thus rendering himself untouchable for the weekend. Curt showed up to give us a total of, I’m not sure because Patman was also there. You will remember him from prior outings in the olden days. 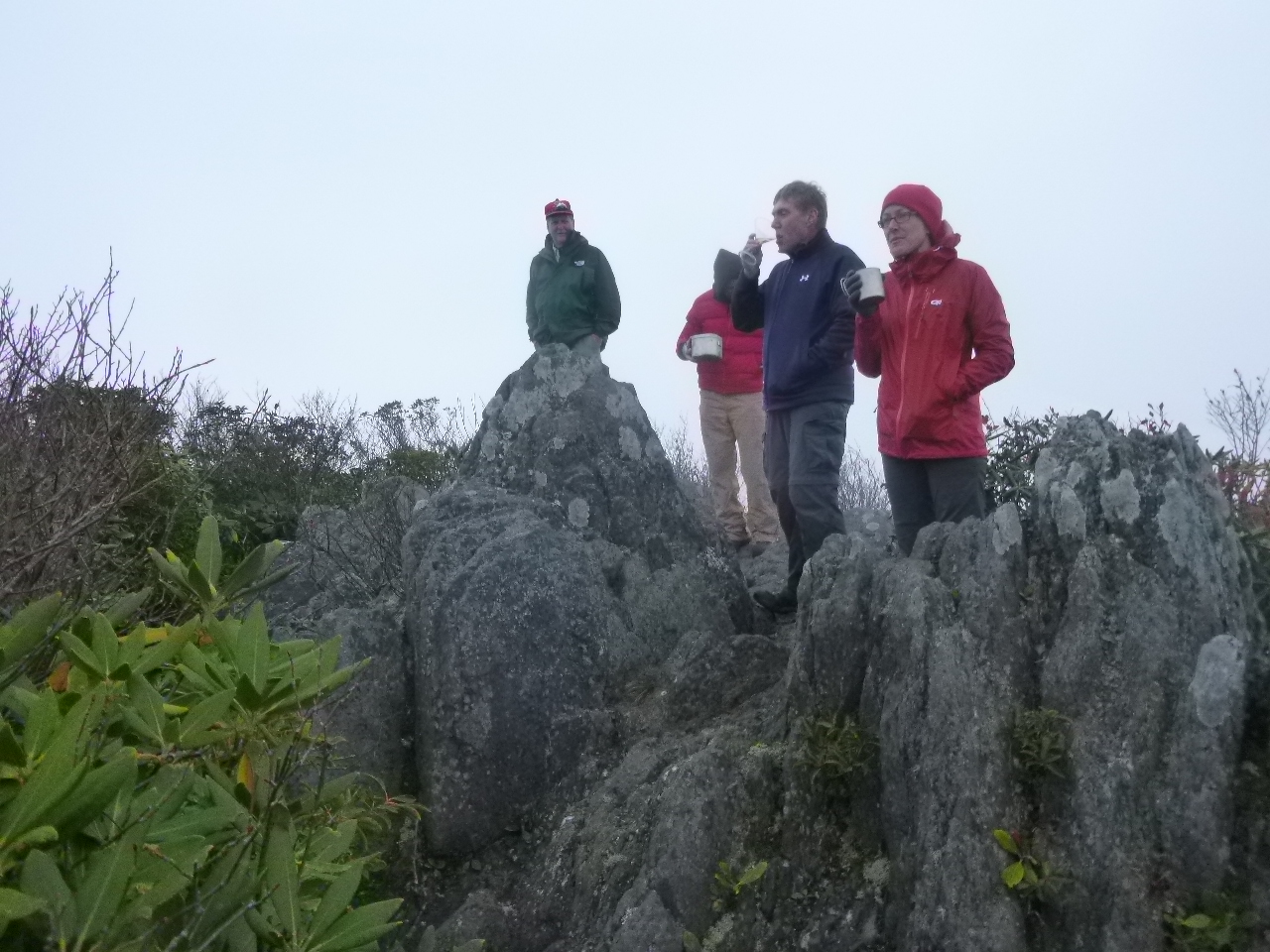 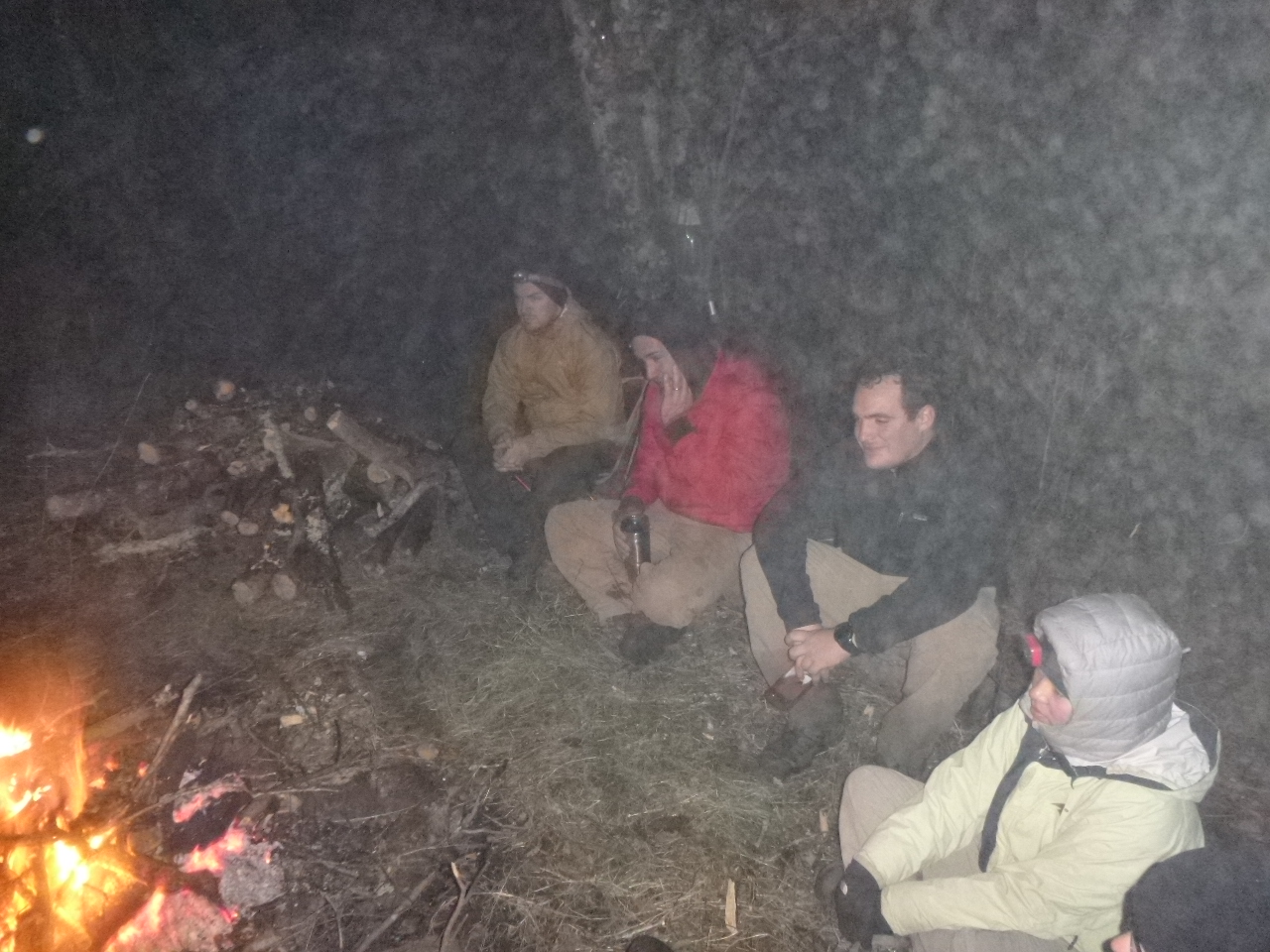 Then we were joined by a group of coeds from Clemson who marvelled at our tales of outdoor activities including the infamous Hook Man and Jonathan Swift analogies. 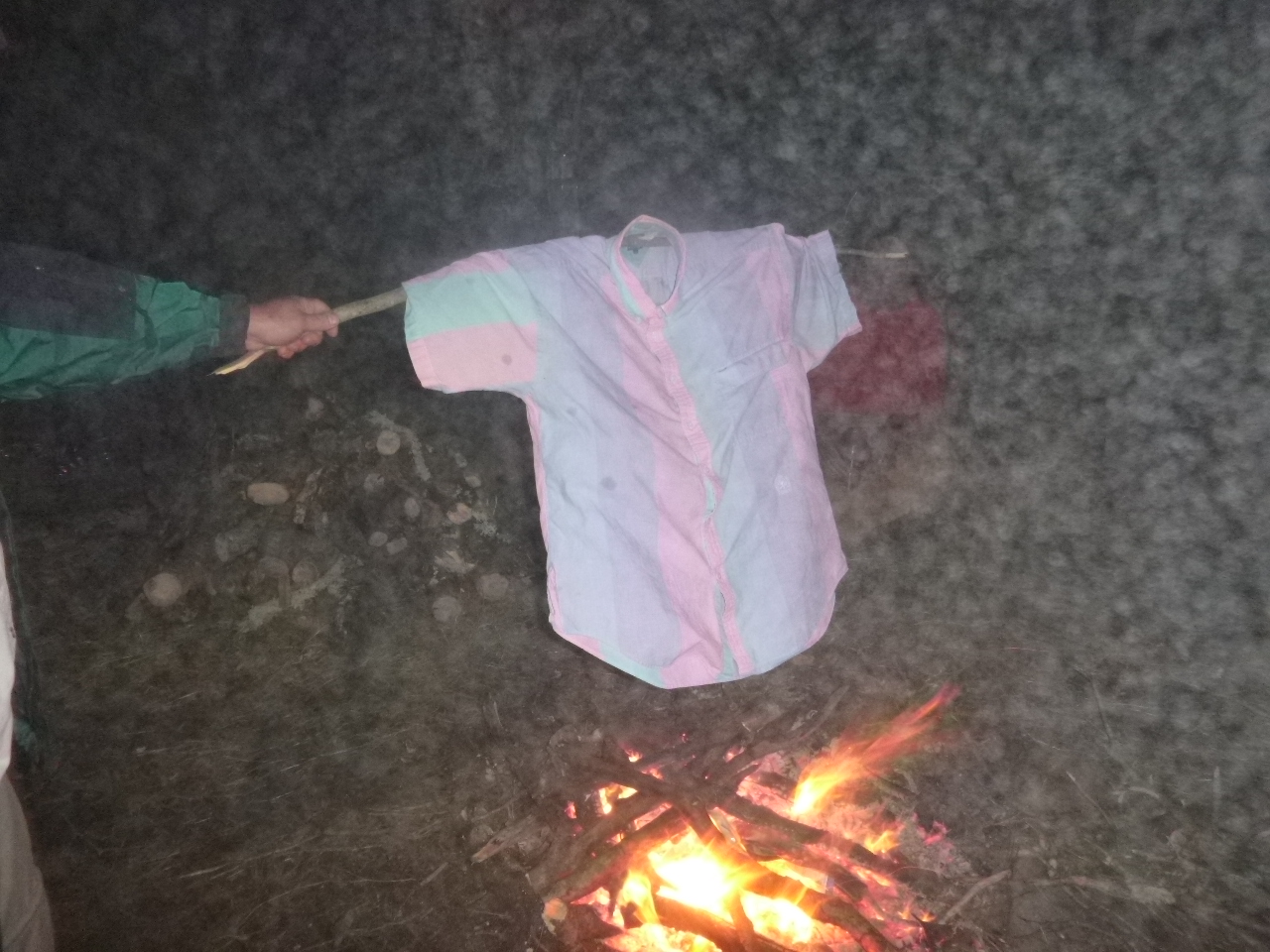 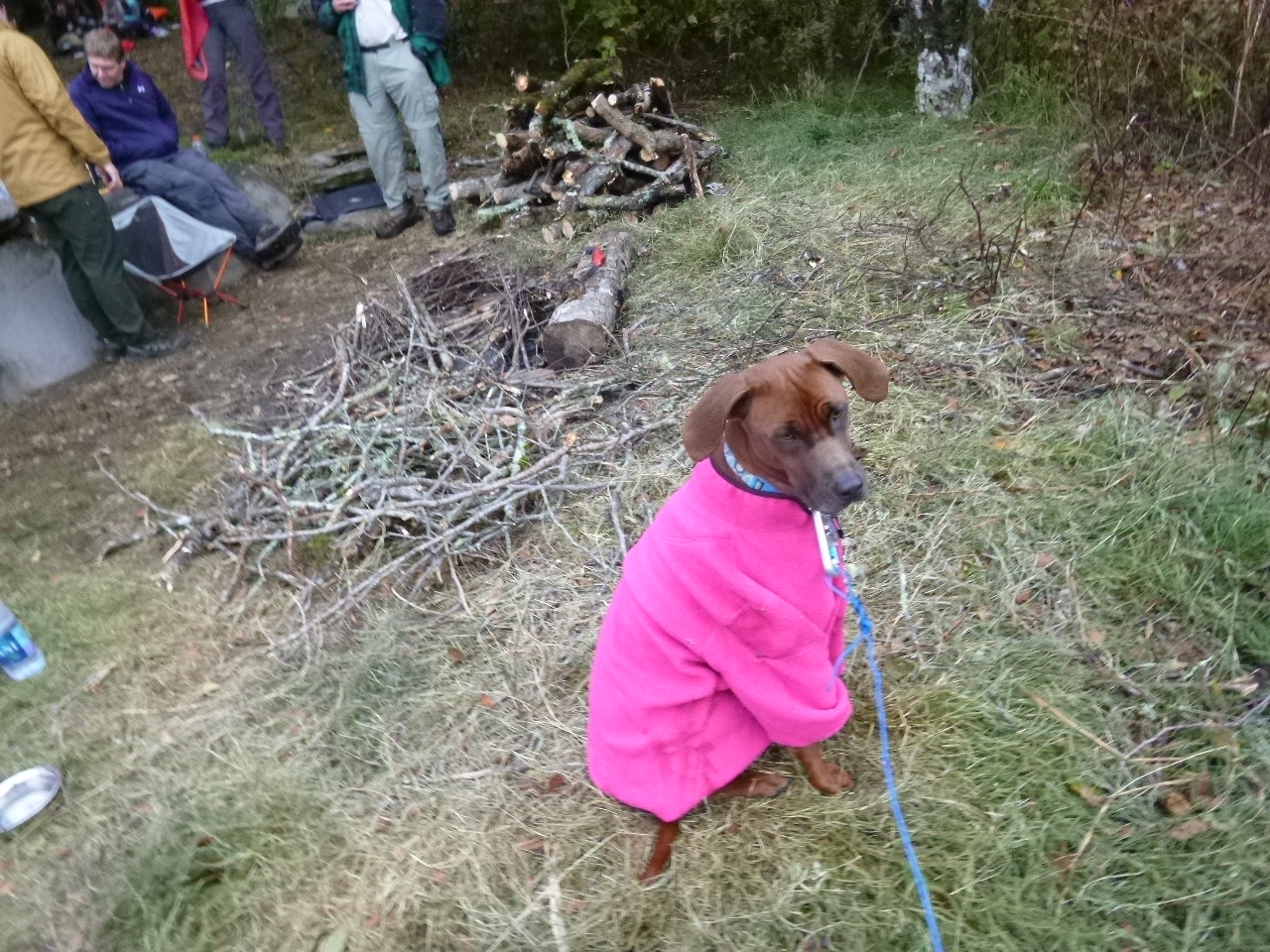 Doing stupid things gets you the pink fleece in the Southernhighlander fold. 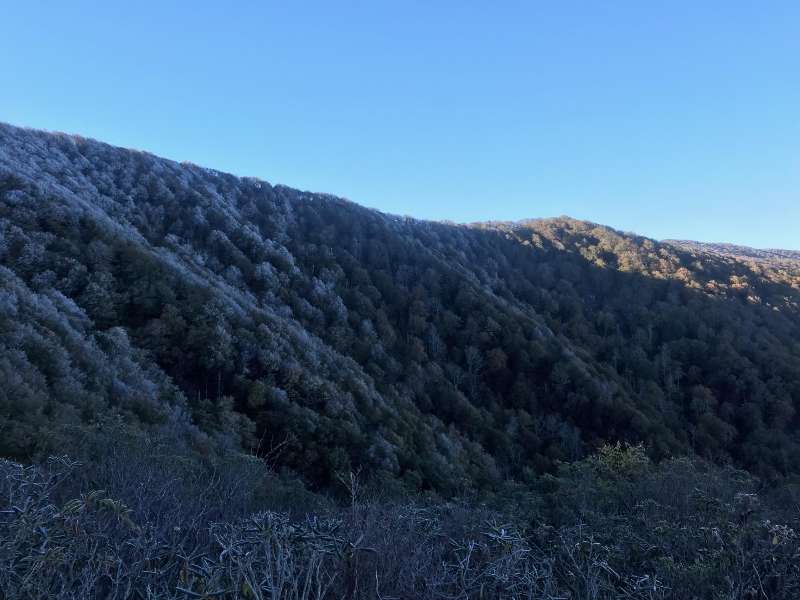 A good coating of hoar frost along the Hangover spine was the breakfast view on Sunday. 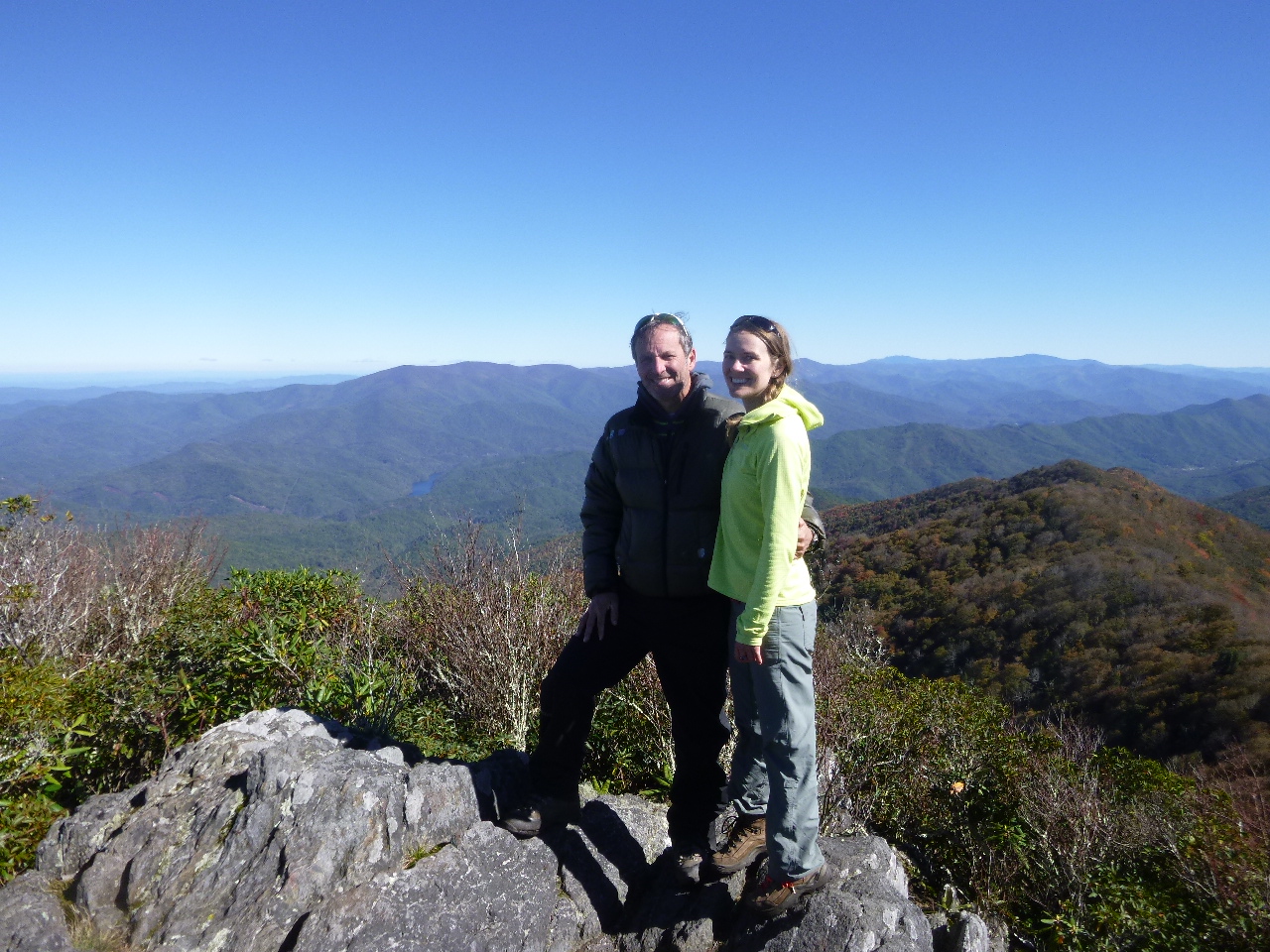 It was 20 degrees, thereabouts on Saturday night. Cold enough to remind me that my toes are still partially frostbitten. It was water bottle freezing cold. But the morning gave us a clear view and some nice leaf action.

It was a great weekend. Total count was, Me, Laurel, Myers, Nick, Stephanie, Curt, Chambers and Patman plus the Clemson crew.  Great fellowship, no pot luck, which is good luck.