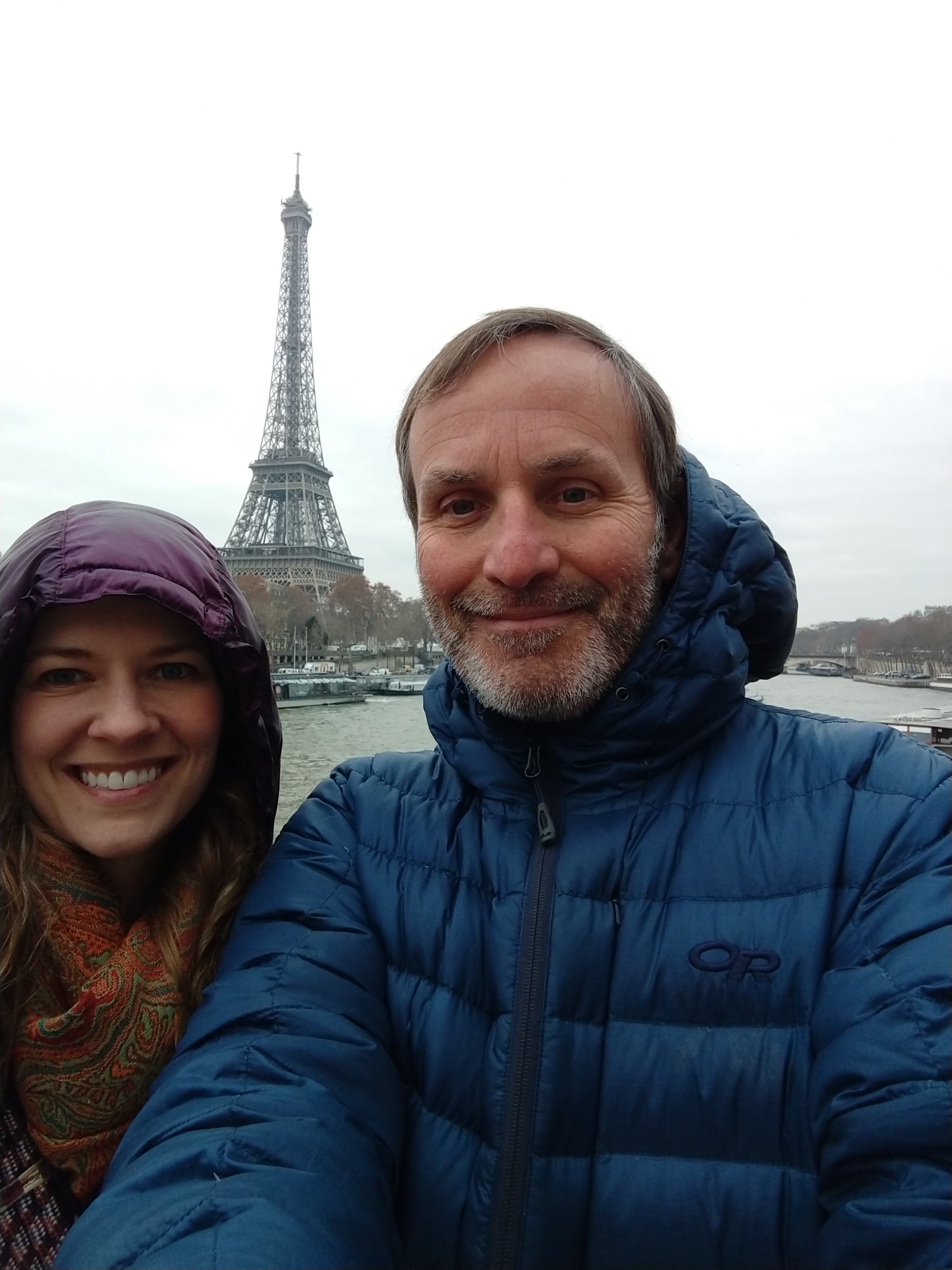 So I started getting that chest crud my last few days in Val Thorens. It was so bad I didn’t even ski that last day and waited on Laurel while she did. (Yesterday three chest x-rays confirmed my first official diagnosis of pneumonia, apparently skiing with a chest cold was bad practice)I will say that Laurel has taken to skiing pretty well. It was bluebird weather and I sat inside watching people rush down these beautifully groomed slopes.

We departed that afternoon on  a bus down to a little town called Moutiers, where we overnighted in a hotel there and caught the tgv back to Paris early the next morning. 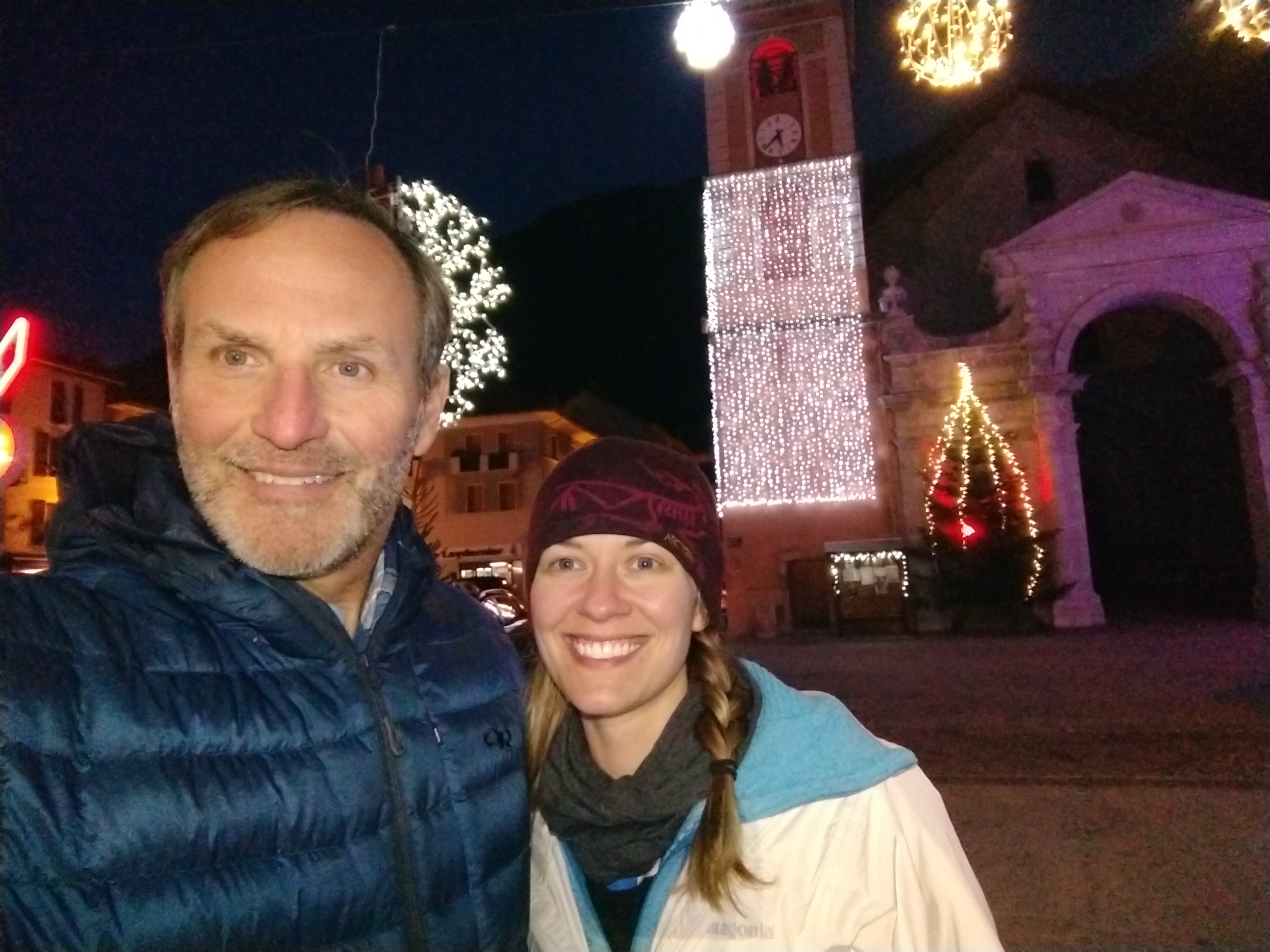 Moutiers is your typical French mountain village. One of the many things I love about France in French culture is just the accessibility and congeniality of the French people. In the small villages folks are very receptive. We make it a point to eat local food and search out traditional fare.  In this particular  region it is called Savoyade.  French take great pride in their cuisine and source local vegetables fruits and meats. There was an unforgettable experience in a restaurant which involved some pate mistaken for meatloaf. The owner of this restaurant had to remove the pan from us before we killed it off in a sandwich.

Early the next morning we embarked upon another High-Speed Rail excursion back into Paris gare du Nord.  I was coughing and wheezing the whole way, as a matter of fact, my bronchial illness seemed to increase by the minute. My malady was offset by our first class accomodation on the tgv since Laurel purchased our tickets and the price difference was only $10. There’s something about going at 200 miles an hour along railway track.  It’s quite thrilling. 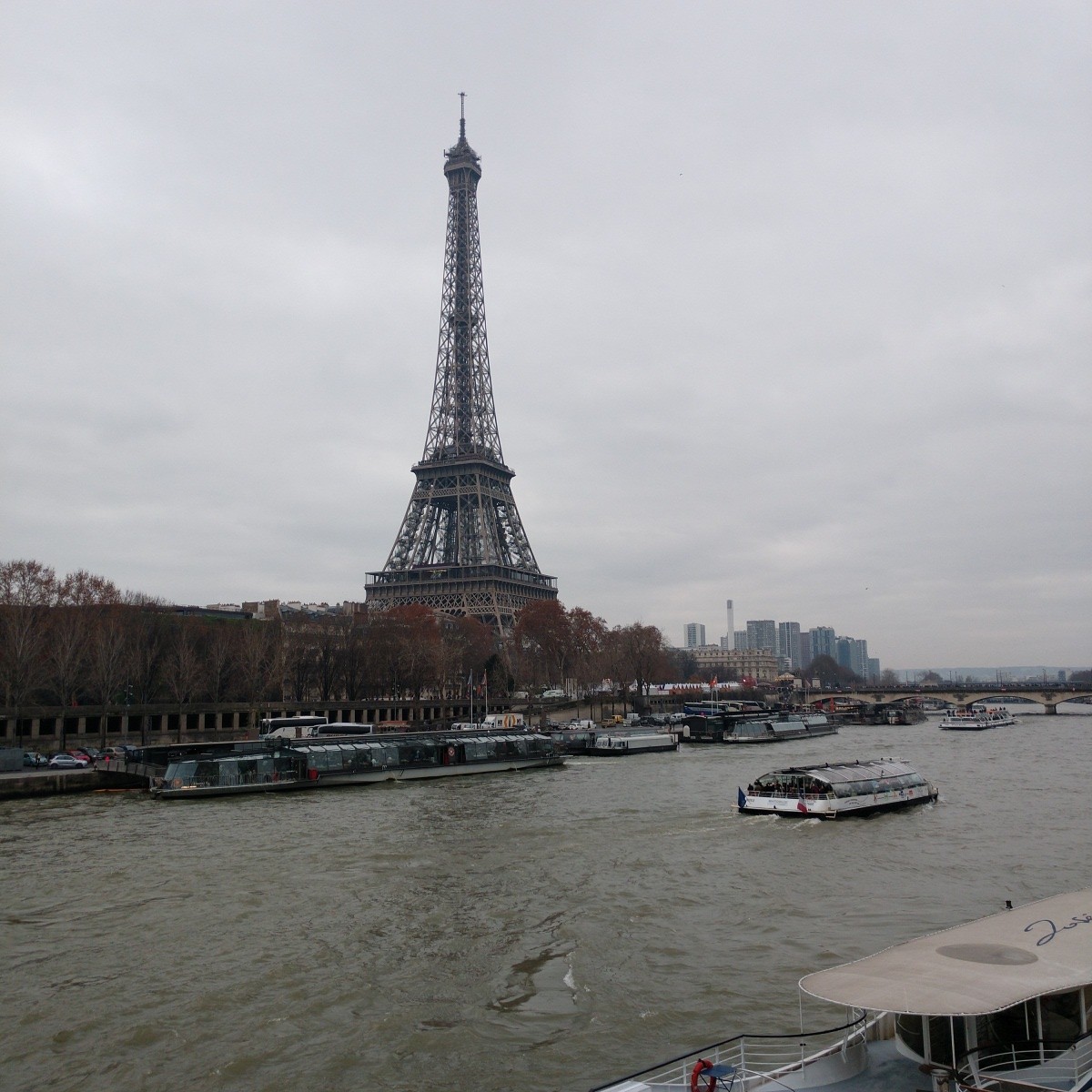 Ah, to stroll the Seine again, although bronchially challenged in typical Paris weather. I believe this was our fourth trip together to Paris. I’ve long since lost count of how many times I’ve been to this remarkable City of lights. Like Sithenge and Hangover and our southern Appalachians, something about France draws me continuously. 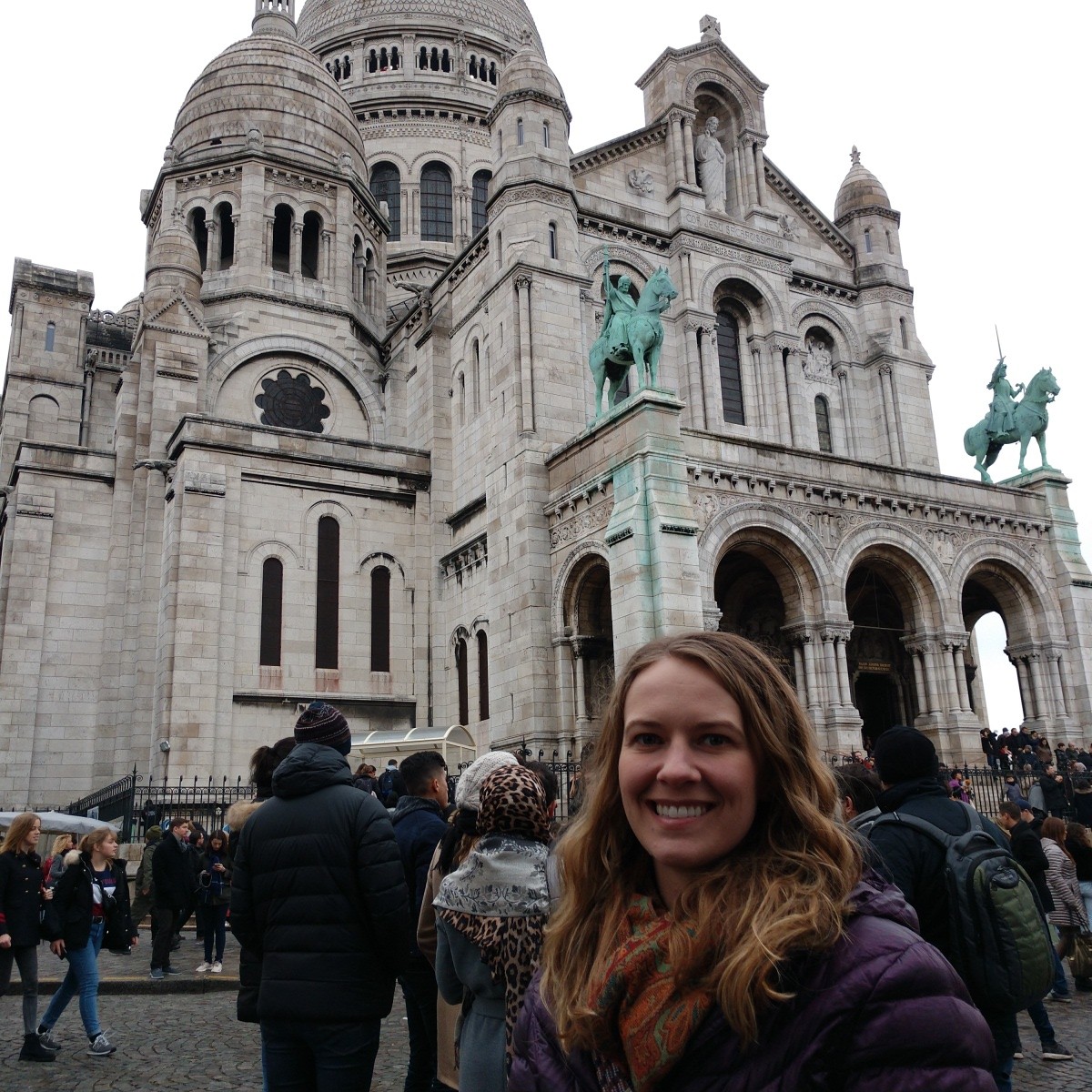 Maximizing a bad situation, Laurel stayed healthy and picked out some very nice restaurants for us which is one of the greatest reasons to visit France. I’ve been to every museum,  climbed the Eiffel tower a dozen times, hit the Louvre plenty. But every time I return there’s another place I have found it yet to be explored. Laurel is pictured above at Montmartre. She was sick last time we visited that area so we returned to refresh her memory. And a nice shot of her in front of the beatiful Sacre Couer.  Neither of us had been to the museum of modern art. It is one of the few free ones in Paris and we thoroughly enjoyed that.

Many of you may have been aware from new stories that there is some political unrest in Paris with the yellow shirts. They’re protesting great tax cuts for the rich, sound familiar? We ran into a couple of those yellow shirt folks and they were quite congenial. If only Americans would take to the streets whenever some politician decides to give wealthy people another tax cut but we are far too lazy. Too many folks would rather let Foxnews make decisions for them than actually research issues and believe what the president of the United States is lying to you about that particular moment.

One year after these infamous tax cuts for the wealthy and look at what our economy has done. I’ve been saying ever since his appointment that Trump is unfit for the office of president. I’ve also been a lone, local voice in saying that he did collude with Russia. When you go out publicly and ask Russia to hack into the emails of your political opponent that is the definition of collusion. But far worse than that he is the most ammoral person to ever hold the office.

He has denigrated the United States across the world and made us a laughing stock.  There is not an educated, living human being that can make a concise argument that the United States is any better off since the election of our moron in chief. This was obviously done,by the way,with the assistance of a hostile foreign power AKA Russia, through corrupt politicians who took Russian money through the NRA.

What he has done to the environment, the national parks and public lands alone is justification for impeachment in my mind. But still people turn a blind eye and think and believe his bull crap. Our public lands have gone up for sale to the highest bidder, oil and gas timber or whatever under Trump.  The damage he has done to our environment will take decades to repair if ever. And just look at what he’s done by releasing EPA requirements on coal fired steam plants. That is air you and I are breathing every day. (speaking of breathing, I have been writing a good portion of this blog post in the Dr. office. Looks like this chest crud has morphed into potential bronchitis)

Sadly most people don’t care. Like the French I look forward to the day that we take to the streets and let these corrupt Trump types know that we will not tolerate their corporate rape of America. We can regain our position as the greatest country in the world. But, I understand, and this comes from someone who’s traveled the world, that we have to get rid of Trump in order re-establish our pre eminence and send a message to our vital allies (hint, they are not North Korea, Russia and Saudi Arabia, btw) that Trump was a fluke. Everyone gets a divot.

For the new year 2019 I wish everyone a socially conscious,environmentally aware presence. May you take actions that are in the best interest of this Earth that God has given us, your family which is the greatest gift of all, and endorse the truth above all else. 2018 was one of the greatest years of my life. I enjoyed the support of everyone in my great quest and eventual success on Mt. Everest. Remarkably, at this time last year, Everest was still just a rogue idea. If you learn anything from my experiences, know that you can do and pursue your dreams if you follow God’s plan and listen to what the mountain is telling you.  For everyone here who supported me this past year I extend a sincere THANK YOU from the top of the world.  I wish you and your families a happy, prosperous and healthy 2019. I leave you with a quote from John Muir, forwarded to me in form of a Christmas card by Chuck Adams of Muir Faction fame,

I only went out for a walk,

and finally concluded to stay out till sundown,