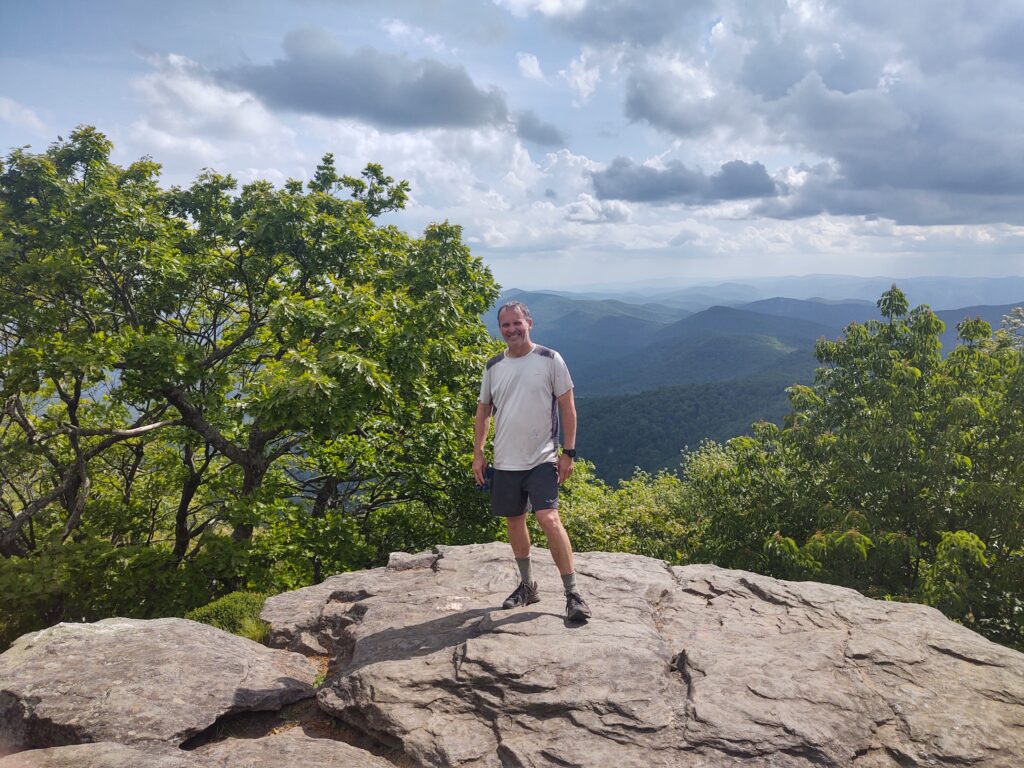 You never know what can happen when you take off on a solo, section hiking journey. As I am on a quest to complete different sections of the Appalachian Trail you may be aware that I needed the bottom part of Georgia. So I decided to take off on a Friday morning at Amicalola Falls State Park with a goal of finishing at Neel’s Gap. 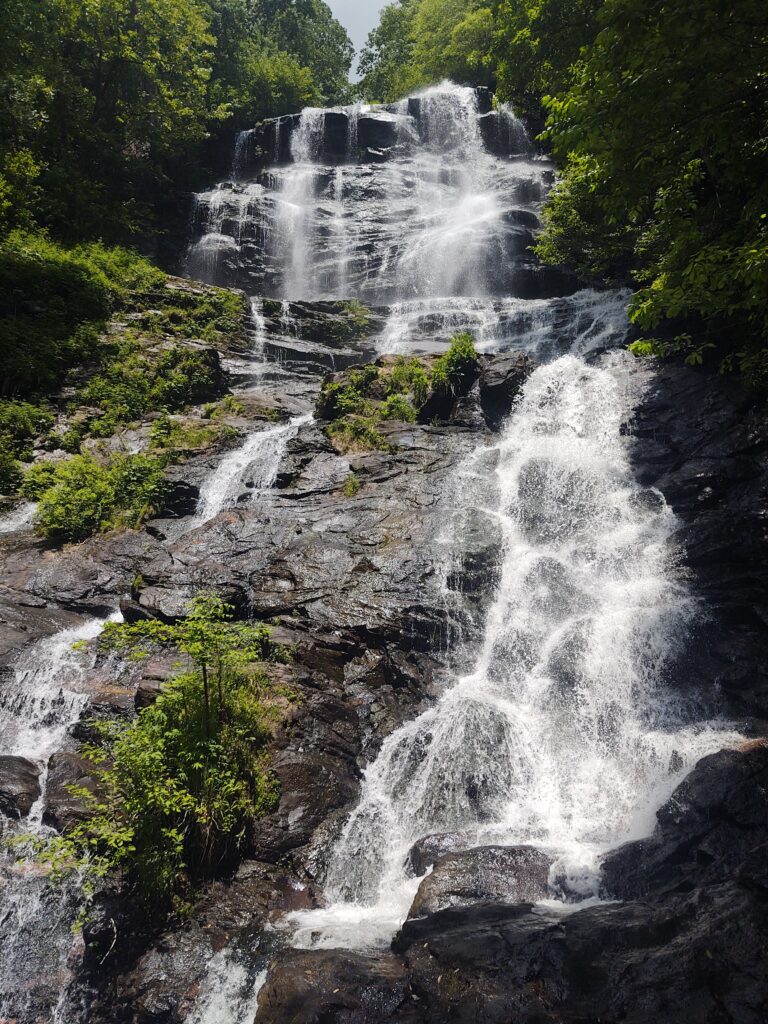 I began the ascent of 600 plus stairs to the top of this waterfall. The start of the route is a little  difficult to follow. but before long I had done about 3,000 ft of elevation and found myself at the true start of the Appalachian Trail. But not before encountering my first two snakes. 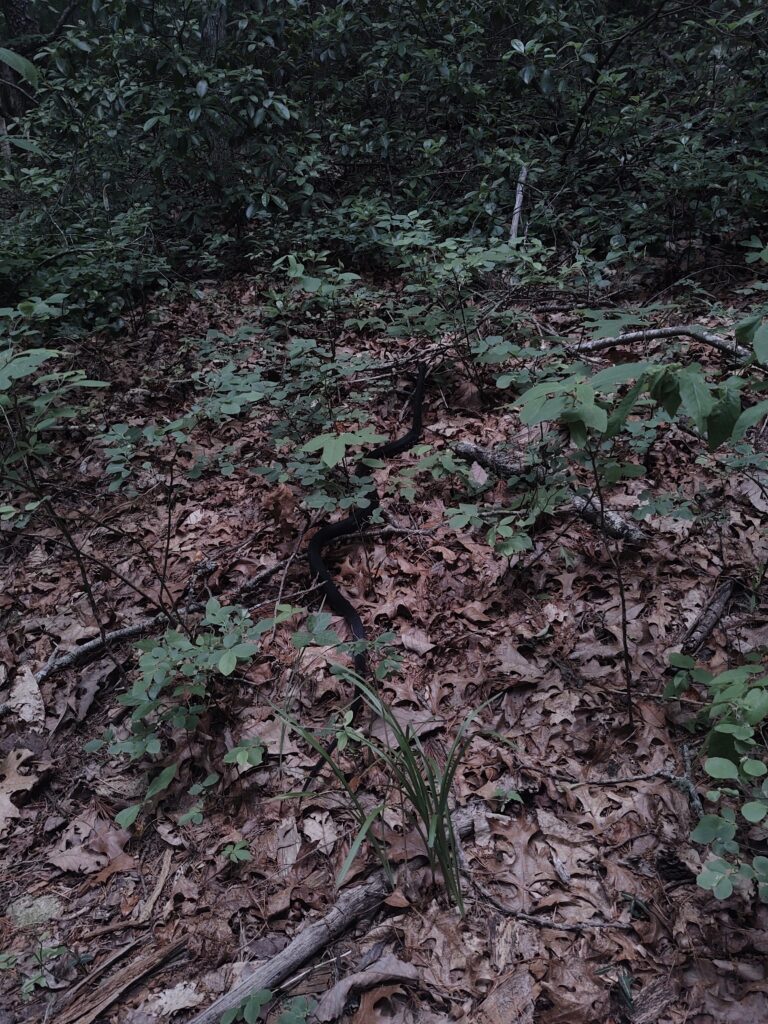 The second was a copperhead but I was unable to snag  a good photo. It was very hot and somewhat miserable as I made the climb into Springer Mountain shelter. 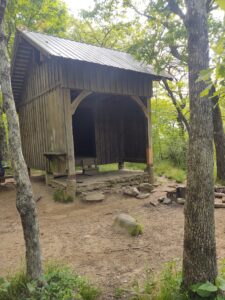 I’m pretty much was resigned to having the place to myself and tried to imagine all the thru hikers starting here at the same time in March. Soon, I was completely naked trying to get out of my soaked hiking shorts when ,a little before dark a man by the name of Tony came rolling in with his 60 lb pack. He found out why my trail name is “Buff”. Tony is intent on thru hiking but doesn’t necessarily have the right gear. I made a few suggestions. My pack was much more reasonable this time at around 24 to 25 lbs. 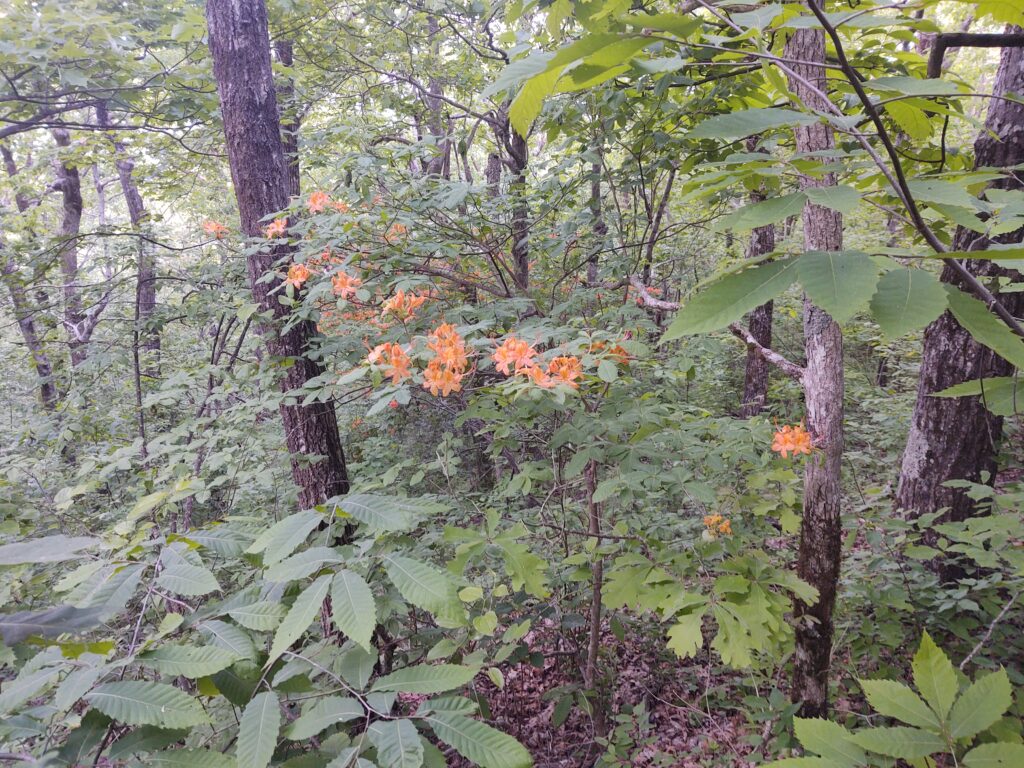 The flame azaleas were flaming along with the rhododendron and mountain laurel. I got attacked by swarm of no- seeums atop Springer Mountain.

They were in every orifice and biting the crap out of me. Thank goodness Tony had some bug spray.

After a very restful night I rose the next morning and embarked towards Justice Creek which was approximately 14 miles from Springer.

About 5 mi into my day I stopped for a little lunch break or a second Hobbit breakfast. While enjoying the sounds of a beautiful creek, I heard a thundering horde approach. The first of about 10 hikers were coming down the mountain to the creek that I was enjoying. I quickly estimated it to be one of the meetup groups. I didn’t expect it to be a Knoxville Meetup group down in Georgia. And who is the first person to recognize me but my friend Patrick Joy. There were two other people in the group that I knew one of which is Annora and the other is Temple. I’ve camped with them before. 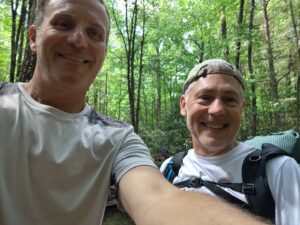 That’s Patrick who has just gotten into backpacking from day hiking. it was meant to be that I ran into them so we joined forces and marched on towards Justice Creek. 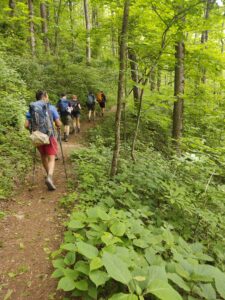 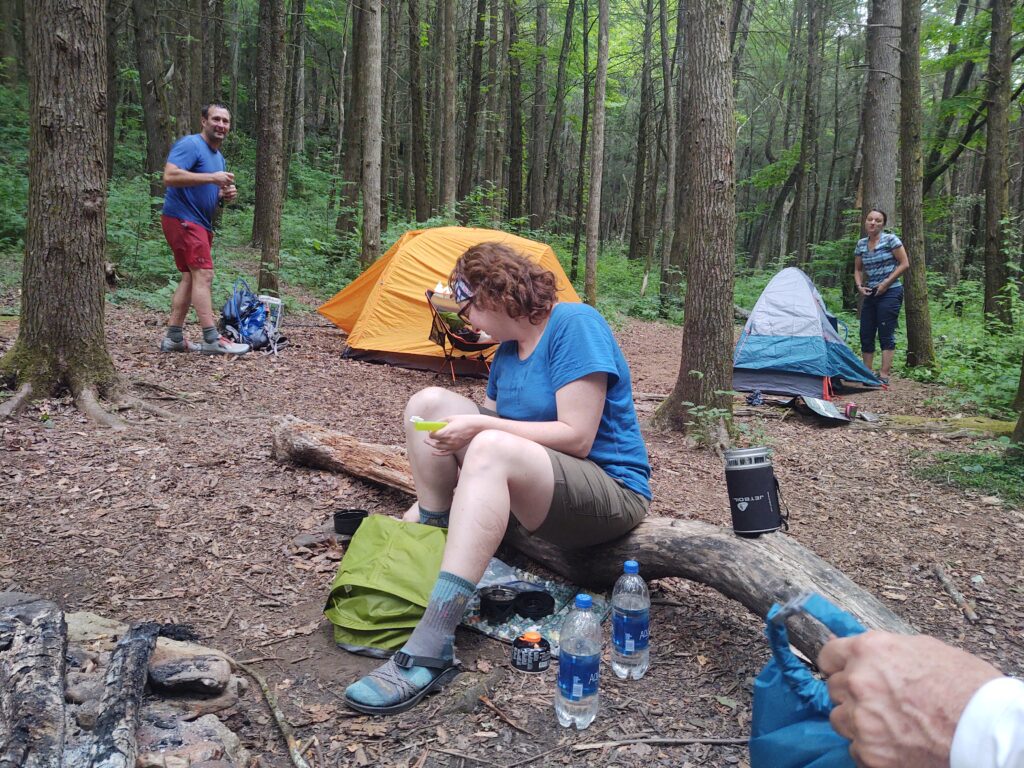 We really had a good time camping together and I was joined in close proximity by Amber, Annoria Patrick and Temple. It was quite the backcountry party which involves swimming in the creek lounging about and a happy hour. I think most people were just happy to be in camp after 14 miles. 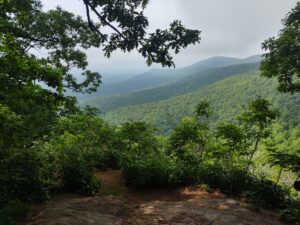 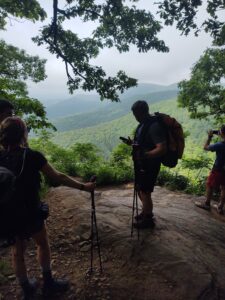 Their following day was short, only 5 mi but mine was going to be 17. So at Woody Gap, I said goodbye to this group. I had to climb blood Mountain and 10.8 miles remained on my plate. 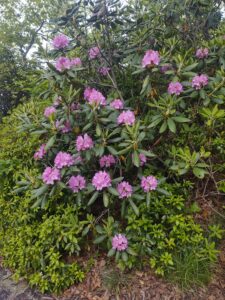 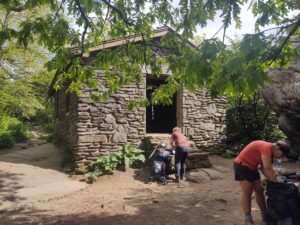 Two of the most miserable miles of climbing ensued on my ascent of Blood Mountain. I came into a plague of inchworms the likes of which I can only describe as Biblical proportion. Imagine billions of strands of hanging insects through which you must walk while going straight up hill and the whole time being attacked by horse flies. The horse flies would dive bomb your head to try to eat chunks out of it. And the strands of inchworms would cover your body and they would begin chewing on the salt l accumulated. I was using one hand to swat the horse flies and the other to scrape inch worms from my body. Of course I was the only person on the trail coming or going. It may well have been two of the most miserable miles I’ve ever hiked.

I’ve never been so happy to see a shelter in my life. I thought about staying up there but realized weather was moving in and I could go ahead and hike out.  I had to secure a shuttle. The following information is important for anyone planning a similar section hike so take note. The guy who picked up Patrick, Temple, and Annoria and the rest of their  group is a thru hiker named Nimrod. I think he runs the above the cloud shelter. I spoke with him as he picked them up and I continued onward to see what he would charge to take me back to Amicalola falls. Nimrod puts himself out there as someone who’s hiked the entire Trail three times. He told me it was 1 hour and a half from Mountain crossings to Amicalola falls. And the going rate was $130. So now we know that Nimrod is a liar. I already knew the going rate was $80 and it was less than an hour. I secured a shuttle from Further Shuttle. This makes me suspicious if any other services Nimrod is providing to Appalachian Trail  hikers. So just be aware of this those of you that are planning a similar trip. I got a Further shuttle for $80. (although the guy was an hour late, he did mail my filter bottle to me as it rolled out in the back of his truck, Cost $17 to postal it back, a filter bottle, but nice of him to do that) 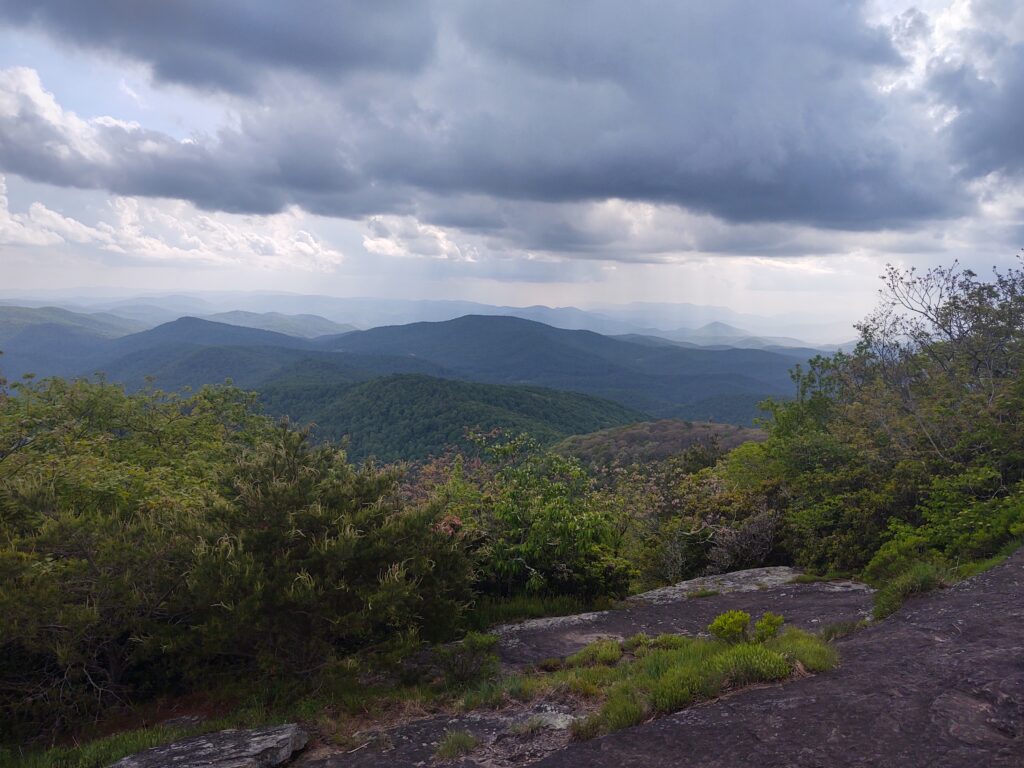 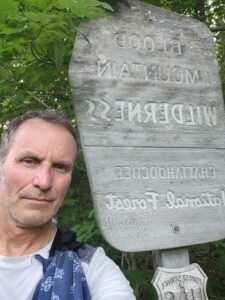 So the snakes and bugs were egregious. But it was freakishly hot in the ’90s. Animals come out when you get a bump in the weather like that.  I’m very pleased to get that section done; now all I’ve got is from Neel’s Gap to Dick’s Creek Gap to be caught up with Frank. Couple of lessons from this hike that were reinforced,  It is always about with whom you hike rather than what you do while you’re there. Don’t trust any guy who’s Trail name is Nimrod, and bring some bug spray for those occasional times when you get into the flying gnats. The approach Trail to Neal’s Gap is up and down and up and down. But very much worth the effort give yourself some time.